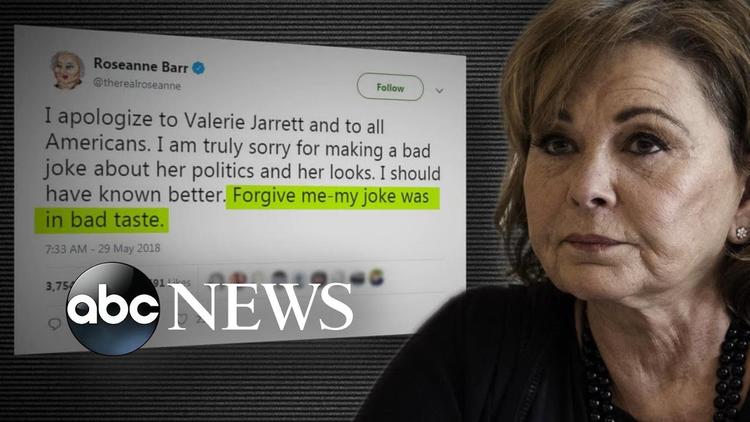 The cancellation of Roseanne Barr’s situation comedy reboot at ABC/Disney is not, as some of my more serious acquaintances on social media are saying, unimportant.

Barr’s attack via Twitter on former Obama aide Valerie Jarrett (who, Barr said, looked like the offspring of a union of the Muslim Brotherhood and planet of the apes), is an important moment in American cultural history. It signals the significance today of internet conspiracy theories (why focus on Ms. Jarrett now, years after she was out of office?) and of a new racist fascism that belittles attempts to rein it in. Ms. Jarrett is African-American, and ape comparisons are an ugly staple of anti-Black discourse. Even the right wing comic Wanda Sykes (a former National Security Agency employee) resigned from the show as production consultant.

The internet has been thick with falsehoods for years about Ms. Jarrett having wanted to promote Islam in the US. Apparently these lies derive from her having been born in Shiraz, Iran, while her father, an American physician, was helping out at a hospital there. The family is not Muslim. The connection from there to the Muslim Brotherhood is ignorance, since the Brotherhood is Sunni but Iran is largely Shiite.

It probably does not need to be said that it was the ‘planet of the apes’ crack rather than the weird invocation of the Muslim Brotherhood that got Barr fired. Racist language against Muslims, Arabs and Palestinians is virtually the only uncontroversial hate speech in today’s America. Barr even did a segment about Muslim neighbors with strong Islamophobic overtones. Senator Ted Cruz even wants to legislate the designation of the peaceable Muslim Brotherhood (which in Egypt made a commitment to peaceful activism in the early 1970s) as a terrorist group, as a wedge for delegitimizing all Muslim non-governmental organizations.

Those on the Right who are complaining of left Stalinism or interference with free speech are surely jesting. No individual has a right to have a television show on ABC (if they do, I’ve been short-changed). ABC/ Disney is a private company and can hire and fire at will for cause, and this behavior was clearly cause. A consumer boycott of ABC advertisers would cost a lot more than what the network will lose from Roseanne’s ratings.

Unlike a lot of academics, I actually watch a good deal of television and have done so my entire life. I spend my days reading heavy tomes, so in the evening I’m just not ready for Hegel. I used to watch Roseanne during its first incarnation in the Clinton years, and remember remarking that it was the only place on television where actual working people were regularly depicted. I remember hearing an NPR interview with a 1960s television writer who said that the studios strictly instructed him never to bring up the words “union” or “strike.”

Situation comedies can be game changers. Joe Biden is convinced that Will and Grace paved the way for greater acceptance of gays and gay marriage. Right wing politicians recognized this reality. George H. W. Bush’s long-forgotten vice president, Dan Quayle, railed against a “cultural elite,” by which he meant those in Hollywood purveying what he saw as liberal values. Quayle was raised in a John Bircher family and almost certainly meant Jews like Barr when he used the term. But this Roseanne show clearly had the potential to push the other way.

Barr herself, what with being an outlandish comedian, was always a bit of a hot mess, clearly prickly and strident. Amy Zimmerman at The Daily Beast surveys Barr’s history of sharp and sometimes baffling exclamations. In her liberal days she castigated Israel for its treatment of the Palestinians. She ran as candidate for leader of the Green Party in the 2012 election.

Then, more recently, Barr flipped. Steve Bannon and Breitbart got into her head and so did Alex Jones and Infowars. She started calling Muslim-Americans “savages” and embracing the wild conspiracy theories that flourish in the fact-free, White-resentment-fueled hothouse of fascist New Media (usually backed by fascist New Billionaires). She retweeted Milo Yiannopolis and spoke darkly of Kamala Harris’s sex secrets. She attacked #MeToo victims. She had long had business dealings with Trump, and made the same shift he did. I am not a psychiatrist and never met either one, nor wish to, but purely as a lay observer of people, I do not believe either one is a well person.

Barr’s odyssey (or odd-yssey) from a liberal champion of the underpaid working class to a vitriolic Trump supporter and conspiracy theorist with an attraction to racist language is in many ways symptomatic of the United States itself. And it is worth noting that Donald J. Trump appears to have followed the same path, though perhaps there were always some racist conspiracy theory issues that were privately important to him. In public, he sounded like liberal Democrat until the last years of the past decade, after Barack Obama was elected.

It may have seemed natural to ABC/ Disney to do a reboot of Roseanne’s show after Trump’s election. The US business elites bought the myth of major white working class support for Trump. (Defections by about 14% of the white working class who had voted Obama to the GOP could have been the margin of victory in some states, but that is one in six, not a majority). It is always reassuring to corporate managers to think that the people you pay badly and deny basic benefits and overwork don’t actually hate you or your party. Not to mention that the working class in the US is not overwhelmingly white to begin with.

But ABC/ Disney either knew about Barr’s bizarre statements and endorsements on social media in recent years and ignored all that (so blinded by dreams of a sure ratings hit that they disregarded the unpalatable behavior) or they did not do due diligence. In the former case, they were exploiting, let us say, a clearly fragile personality–which is a risky thing to do with tens of millions of dollars.

After a moment of contrition, when she blamed her remarks on Ambien, Barr recovered her balance or rather imbalance:

Updated: Roseanne Barr responded to anger over her racist tweet by thanking racists and conspiracy theorists for defending her, suggesting Michelle Obama had directed ABC to fire her, and writing, "i feel bad for @POTUS-he goes thru this every single day" https://t.co/ckYSZ9TKuH

The whole tale is a sorry commentary not on Barr but on where American culture and politics now stands. We went from a corporate elite nervously allowing some working class characters on mass media in the 1990s (just as long, you understand, as it gave no support to actual striking laborers) to transmogrifying it into an Islamophobic hatefest in the teens of the 21st century.

Some of my Twitter acquaintances are complaining that the news of a Harvard study showing thousands of deaths in Puerto Rico from last fall’s hurricane has been overshadowed by the Barr firing, implying that the latter is fluff. But both pieces of news point at the same reality, of a downward spiral in American politics. George W. Bush was pilloried for his inaction over Katrina. Trump has gotten away with criminally neglecting the US citizens of Puerto Rico.

At least we have not retrogressed to the point where Barr’s attack on a prominent African-American was allowed to pass by her employers, though it should be noted that Trump has said many things as offensive as Barr and remains at 40% in the polls.

In a better America, there would be as much discomfort with Barr Islamophobia as with her disdain for African-Americans.