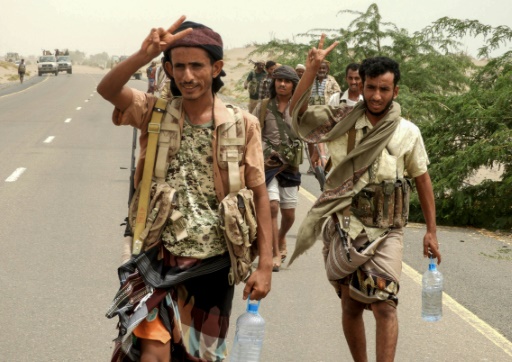 With Alison Tahmizian Meuse in Dubai

Al Duraihimi (Yemen) (AFP) – Yemen’s rebel chief urged his forces to fight on against pro-government troops pressing a Saudi-backed offensive to retake the key aid hub of Hodeida, as the UN called for the Red sea port to be kept open.

Heavy fighting left 39 people dead on Thursday, a day after the Saudi-led coalition launched an assault to recapture the city controlled by the Iran-allied Huthi rebels.

Rebel leader Abdel Malek Al-Houthi urged troops to “confront the forces of tyranny”, warning they would recapture areas taken by pro-government forces by “bringing huge numbers (of fighters) to the battle”, according to the rebels’ Al-Masirah TV.

“The western coast will turn into a big swamp for the invaders,” he added.

The clashes came as the UN Security Council met for urgent talks on the military operation and called for the port, held by the rebels along with the capital Sanaa since 2014, to be “kept open”.

The Huthis suffered 30 fatalities on Thursday in the clashes, medical sources told AFP.

Nine pro-government troops were killed in the same area, the medics said. Military sources said the deaths were caused by mines and snipers.

The United Arab Emirates, a driving force in the coalition, said four of its troops were killed on the first day of the offensive.

The Huthis’ television channel earlier said they had struck a coalition ship off the coast of Hodeida with two missiles. There was no independent confirmation of the report.

The United Nations has warned against an offensive on Hodeida because the port serves as the entry point for 70 percent of Yemen’s imports, with the country already teetering on the brink of famine after three years of war. 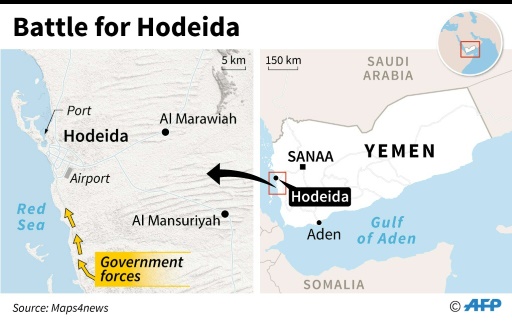 “We still have seven ships in the port. The work in the port is normal. And we have five other ships standing by waiting outside to enter,” port director Dawood Fadel told AFP.

Yemen’s Foreign Minister Khaled Alyemany said that government forces were holding off on advancing on the port for now, and “are not planning to destroy the infrastructure”.

“We are in an area close to the airport, but not to the sea port. The sea port is totally out of operations, today,” he told reporters on Thursday.

Riyadh and Abu Dhabi, which intervened against the Huthis in 2015 with the goal of restoring Yemen’s government to power, have pledged to ensure a continuous flow of aid to the Arab world’s poorest nation.

Abdullah al-Rabeeah, the head of Saudi Arabia’s King Salman Aid and Relief Centre, pledged an air, sea and land bridge would be opened “to transport aid and medical supplies, food, shelter and fuel other basic necessities”.

Capturing Hodeida would be the biggest victory for the Saudi-led coalition since the start of its costly intervention. 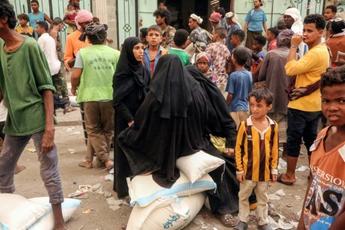 AFP / ABDO HYDER. The UN has warned against an offensive on Hodeida because the port serves as the entry point for 70 percent of Yemen’s imports, with the country already teetering on the brink of famine after three years of war.

International aid groups cautioned the threat of a major humanitarian catastrophe was growing as fighting drew closer to Hodeida, with the UN estimating some 600,000 people live in and around the city.

The group warned of a “high risk” of a fresh cholera outbreak around Hodeida should water supplies be disrupted.

During a closed-door meeting, members of the Security Council expressed their “deep concern about the risks to the humanitarian situation” and called for Hodeida port to remain open, Russian Ambassador Vassily Nebenzia, who holds the council presidency, said.

But the council brushed aside a call by Sweden, a non-permanent member, for a freeze to the military operation to allow time for talks on a rebel withdrawal from the Red Sea port.

Yemen’s internationally recognised government earlier said negotiations had failed to force the rebels from Hodeida, and a grace period for UN-led peace efforts was over.

Nevertheless, the UN envoy for Yemen, Martin Griffiths, has continued to hold talks on keeping Hodeida open and has urged all sides to exercise restraint.

But UAE Minister of State for Foreign Affairs Anwar Gargash insisted in a statement that “it is clear that for the UN-led political process to succeed, the situation on the ground must change”.

Yemen’s Saudi-backed President Abedrabbo Mansour Hadi, who has spent much of the war in exile in Riyadh, on Thursday visited the southern port city of Aden, where the government set up its base after being ousted from Sanaa.

State-run Saba news agency said the aim of Hadi’s first public visit to the country in more than a year was to “supervise” the military operations in Hodeida province.

More than 22 million people in Yemen are in need of aid, including 8.4 million who are at risk of starvation, according to the United Nations, which considers Yemen to be the world’s worst humanitarian crisis.