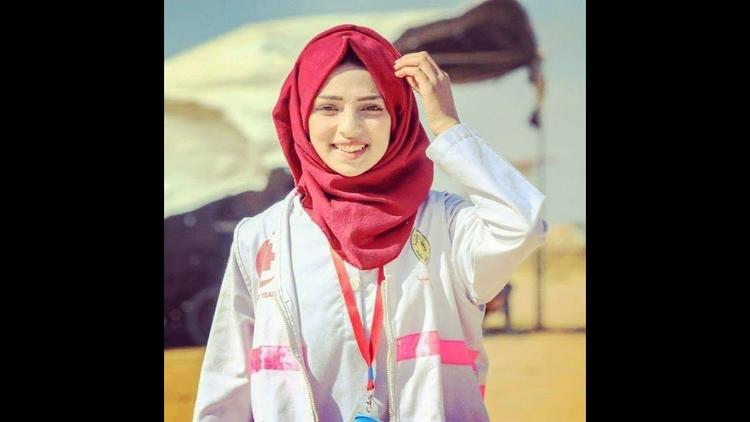 “Israeli forces shot and killed a 21-year-old Palestinian woman paramedic on Friday, as she was treating injured protesters during ongoing demonstrations along the Gaza border with Israel, in the southern Gaza Strip. The Gaza Ministry of Health reported that 21-year-old Razan Ashraf al-Najjar, from the Khan Younis-area town of Khuzaa, was shot in the stomach as Israeli forces deployed near the border fence opened fire on a group of five paramedics, including al-Najjar, as they were aiding injured protesters near the fence. The spokesperson of the ministry, Ashraf al-Qidra, added that more than 100 protesters were injured on Friday, 40 of them with live ammunition, while the others suffered from tear-gas related injuries. Al-Najjar was one of at least two medics who had been killed by Israeli forces since the “Great March of Return” began in Gaza on March 30th. Since then, over 110 more Palestinians have been killed, including journalists and children.”

For the Israeli Army to shoot unarmed Palestinians who posed no danger to anyone simply because they were in a zone declared off limits within Gaza is a war crime. Shooting unarmed civilian nurses is certainly a war crime:

The practice has nevertheless been sanctioned by the Israeli Supreme Court, a stark illustration of the Israeli Establishment’s spiral down into a form of Central European fascism and supremacist ethnic nationalism.

The 1949 Geneva Conventions were enacted to prevent the recurrence of common practices of the Nazis in Europe.

While there had been exchange of fire between Israeli fighter jets and some small rockets of the Islamic Jihad organization in Gaza earlier this week, the Friday march involved unarmed civilian activists. No clashes occurred and Ms. al-Najjar was on Gaza soil wearing clothing marking her as a paramedic. Israeli snipers have very good scopes and her death, or the injuries to a hundred other civilians, was unlikely to have been an accident. Israeli snipers have in the past been caught on camera rejoicing over their long-distance shooting of defenseless Palestinians in Gaza.

“Today the Palestinian Medical Relief Society mourns the loss of one of our own. 21-year old volunteer medic Razan Al Najjar was shot and killed by an Israeli sniper yesterday in Gaza as she was attempting to provide first aid to an injured protester. She was shot to the chest, the bullet ripping through the white vest with red emblem and PMRS logo that was marking her as medical personnel. Yesterday, 3 other PMRS first aiders were injured by live bullets: Rami Abu Jazar, Mahmoud Fa’wur and Mahmoud Odeh. In total, Israel has injured 223 paramedics since the end of April, 29 of them with live ammunition.”

TRT World says, “Razan al-Najjar was working on the frontlines during the Gaza protests. In this exclusive footage, she’s tended to by at least half a dozen colleagues before succumbing to her wounds.”

Razan Al-Najjar volunteered as a paramedic, treating Palestinians wounded by the IDF at the Gaza fence. Now she’s dead, reportedly shot in the chest by an Israeli sniper. She was 21 years old.

The YouTube site preserves an interview conducted with Razan while she was caring for wounded Palestinians.

On Friday before the carnage, Middle East Monitor had reported:

“Palestinians on Friday gathered along the Gaza-Israel security fence — for the 10th consecutive Friday — to take part in ongoing rallies against Israel’s decades-long occupation.

Gaza’s National Authority for Breaking the Siege, which is organizing the rallies, dubbed Friday’s demonstration “From Gaza to Haifa: Unity of Blood and Shared Destiny”.

“We also urge Palestinians in the occupied West Bank and Jerusalem — and inside Israel — to rise up against the occupation,” the authority said in a statement.

In Israel’s northern city of Haifa, meanwhile, Palestinian activists said they, too, planned to hold demonstrations in solidarity with their compatriots in blockaded Gaza.

For the first time last Friday, a parallel demonstration was held in Haifa to condemn ongoing Israeli violence against unarmed Gazan demonstrators.

Israeli police forcibly dispersed the Haifa demonstration, arresting 19 protesters — including one whose leg was allegedly broken later while he was in police custody.

“To our people [in Gaza] from the territories occupied by Israel in 1948: let’s act together to defend our legitimate rights,” Palestinian activist Amani Mushtahi declared in a video message broadcast from Haifa.

Activist Ayman Ali, for his part, tweeted: “We must take part in the Gaza-to-Haifa rally for the sake of our martyrs, injured and imprisoned.”

Since 30 March, at least 118 Palestinian demonstrators have been martyred — and thousands more injured — by Israeli army gunfire near the Gaza-Israel security fence.”