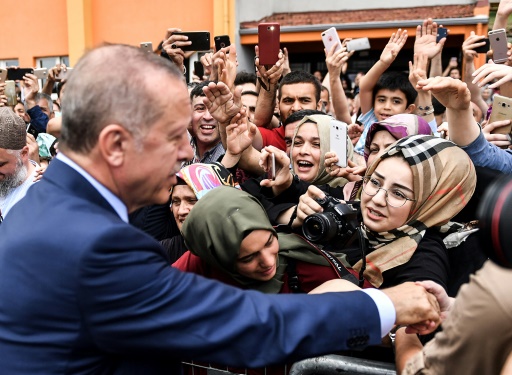 Istanbul (AFP) – Turkey’s President Recep Tayyip Erdogan won a decisive victory in weekend elections, scuppering predictions that his popularity was on the wane after 15 years in power.

Erdogan, 64, secured a new presidential term with enhanced powers in an outright first round victory against his main rival Muharrem Ince who failed to end the Turkish strongman’s supremacy despite an energetic campaign.

His ruling Justice and Development Party (AKP) also held onto its overall majority in parliament — albeit only with the help of a pact with nationalist allies. The results surprised many analysts who had predicted a second round vote and an opposition majority.

Here are five reasons why Erdogan, who could theoretically stay in power until 2028, dominated these elections and may continue to dominate Turkish politics for years to come.

A glance at the electoral map of Turkey’s 81 provinces shows the task faced by the opposition.

While Ince was ahead in eight provinces mainly in western Turkey and pro-Kurdish candidate Selahattin Demirtas won in 10 provinces in the southeast, the 63 other provinces including the entire heart of the country was for Erdogan.

In key Anatolian provinces with large populations, like Kayseri and Sivas, he polled over 70 percent.

It is in this Anatolian heartland that Erdogan still inspires impassioned support from people who share his Islamic conservative beliefs and credit him for bringing Turkey to greater economic prosperity and respect.

In his victory speech, he vowed to make those who were once marginalised “first class citizens”.

“Erdogan’s emotional bond with his voters proved intact,” said Ozgur Unluhisarcikli, the Ankara office director of the German Marshall Fund of the US.

Erdogan has genuine and wide popularity. But as in past elections he was able to rely on hugely favourable coverage in print media and near domination of the airwaves.

State television all but ignored the opposition, with state-run TRT not airing a single second of live coverage from Ince’s final rally on Saturday.

Private media are also largely on the president’s side, especially after the takeover by the pro-Erdogan Demiroren Group earlier this year of the Dogan Media Holding which includes the widely watched news channel CNN-Turk.

This also stymied other opposition candidates, with nationalist Meral Aksener almost absent from television and Demirtas in jail.

“The vast majority of Turks regard TV as a news source. The opposition does not have that access,” said Anthony Skinner, director of Middle East and North Africa at the Verisk Maplecroft consultancy.

With the double election victory on Sunday, Erdogan can now boast of having won an astonishing 14 elections since coming to power.

The Turkish strongman remains a master of campaigning despite the occasional missteps in the last weeks which saw him unwittingly give the opposition a slogan when he vowed to step down “when Turkey says enough”.

He criss-crosses the country, drawing huge crowds by snarling at opponents and making promises that show an acute appreciation of local issues.

He also again showed nous calling these polls one and a half years ahead of schedule before the economy weakened and the opposition could become more organised.

“Erdogan is the supreme strategist and he put these skills to good use,” said Skinner. “He saw the economic headwinds coming.”

The number one surprise in the parliamentary elections was the strong performance of Erdogan’s ally the Nationalist Movement Party (MHP) which some had written off ahead of the polls but whose vote held.

By contrast, Aksener and the new Iyi (Good) Party which she founded after splitting off from the MHP failed to make the expected impact.

While known abroad as an Islamic politician, Erdogan has in recent years increasingly taken on the clothes of a nationalist, spearheading operations against Kurdish militants and inside Syria.

Unluhisarcikli described the MHP’s success as “the single most important outcome of the election” which would affect both domestic and foreign policy.

Ince was praised for running an effective campaign, mobilising hundreds of thousands at some rallies and in the end winning more votes than many would have expected only a month ago.

But his Republican People’s Party (CHP) contains few figures with any experience of government and it struggles to retain credibility.

Ince himself admitted making a mistake on election night by texting an admission of defeat to a journalist friend while not making a public statement.

Meanwhile the greatest asset of the pro-Kurdish HDP, Demirtas, is hidden from view behind bars on charges he alleges were trumped up by Erdogan.

“It is very depressing for the opposition as the election was the last window for them” before Erdogan assumes the executive presidency with additional powers, said Skinner.