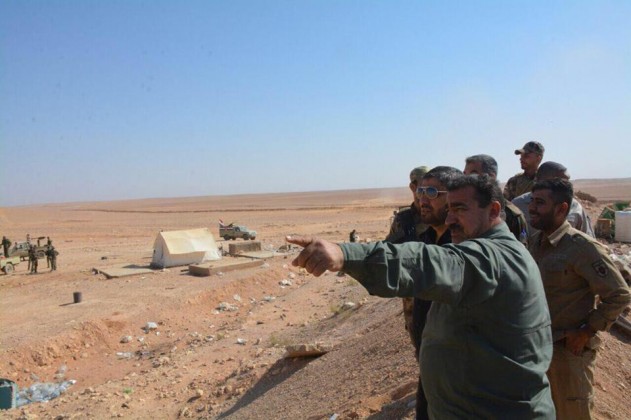 Baghdad (Niqash.org) – Locals in Al Qaim, Anbar, worry that the current stable security situation can’t last. It’s being upheld by US troops and Iran-allied militias, whose antipathy toward one another is becoming more overt all the time.

Iraqi troops searching a secret IS base near Al Qaim. (photo: Iraqi Ministry of Defence).

The people of Al Qaim, a town in the far west of Anbar province, near the border with Syria, is a much happier place these days. During the past three years of the security crisis, sparked by the extremist group known as the Islamic State, it was considered an important base for the group. It was often referred to as the Islamic State group’s secret capital.

“Compared to a year ago the security situation is stable,” says Abdul-Rahman Karbouli, a community leader in Al Qaim, based in the Rumana area. “A year ago, this was a distant dream because of the presence of the extremists. Today we can stay up late without fear and my son works in one of the dairy factories in the city.”

It sounds good but Karbouli says it may not last; there is a big problem brewing. He fears that Al Qaim will fall victim to a conflict between the US military and members of the Shiite Muslim militias. The latter are former volunteers who fought against the Islamic State, or IS, group, but who are now an official part of the state security forces.

The brigade is not happy with the presence of US troops here. We believe they are actually supporting the terrorists.

“The Iraqi army and the militias are protecting us,” Karbouli says, “but we are hearing an increasing number of threats against the US from the Shiite militias in Anbar.”

Iraqi officials say that the US efforts in Anbar have been indispensable when it comes to securing the country’s porous borders with Syria, borders that allowed the IS fighters to come back and forth at will and which made Al Qaim such a good base for them. The Iraqi military has welcomed US troops. However the Shiite militias, who are doing some of the same work as the Iraqi and US military, are not as keen on the idea.

After the IS group was officially driven out of Al Qaim in November 2017, US troops were deployed to barracks on the outskirts of town, in an area dominated by Sunni Muslim tribes with social and tribal connections to Syrian tribes over the border – in particular the Karableh and Mahalawi clans. But at the same time, Shiite Muslim militias, with strong affiliations to Iran, were also deployed in the area, in what appeared to be a clandestine race for influence in the border area.

Both military groups have a shared objective: To keep the area clear of the IS group and its fighters. In fact, last week, after IS group attacks in Kirkuk and Salahaddin, the Iraqi air force struck locations inside Syria in an attempt to knock out IS cells. And US-Iraqi joint units were able to arrest four senior IS leaders in early May inside Al Qaim. 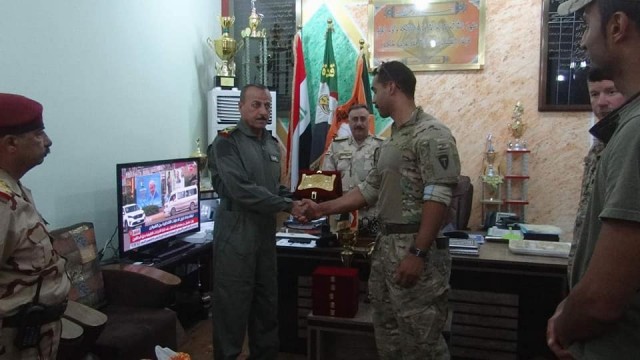 An Iraqi soldier shaking hands with a US soldier at their Anbar base.

But there are also other apparent aims of the two anti-IS forces here. Iran has long sought to carve out areas of influence that would allow it an unobstructed path to the sea: Such a path would go through Syria and Iraq. The Shiite Muslim militias associated with Iran, which supplies funding, weapons and advisory, want to open that road. The US forces want to keep it shut.

“The information provided by the friendlies [the way that the Iraqi military describe the international coalition, including the US, fighting the IS group] obtained with their drones and other intelligence information is essential in helping us secure these long borders,” says Saad al-Obeidi, a sergeant with the Iraqi army’s 12th division.

But his division doesn’t just work with the US forces, they also deal with a Shiite Muslim militia in Anbar, the Tafouf Brigade. “The irony is that we are working with bitter rivals,” al-Obeidi says. “The US forces fear the Tafouf brigade in the city and the brigade wants the US forces to withdraw. Every time we meet either group, we hear the bad way they talk about each other.”

When the Iraqi government declared the end of fighting in Anbar, all the Shiite militias withdrew from the Sunni-majority province except the Al Tafouf brigade, stationed in Al Qaim. Its leader is Qassim Musleh, who was actually imprisoned by the US during its invasion of Iraq. He was jailed in a UK base in Basra for three years.

The brigade he commands now is one that split from the Ali Akbar fighting units, which are closely associated with the holy southern city of Karbala and Shia Islam’s highest authority in Iraq, Ali al-Sistani. As such, the Ali Akbar units were more pro-Iraq than pro-Iran. However Musleh was removed from the job, allegedly for mistakes made in battle, and founded a new militia, this time one that was more closely affiliated with Iran.

Mostly the Al Tafouf brigade has been working on removing improvised explosive devices left by the IS group on the roads and trying to ferret out sleeper cells that may still be hiding in the Al Qaim area. Last week, it announced that it had found a secret base belonging to the extremists on the outskirts of the city, complete with tunnels and weapons stores.

“Our brigade has good relations with the people of Al Qaim,” one of the Al Tafouf members, Abdul Amir al-Masoudi, told NIQASH in a phone interview. “But the brigade is not happy with the presence of US troops here. We would like them to leave the city and we believe they are actually supporting the terrorists.”

This is an old rumour that has been repeated many times by the Shiite militias opposed to the US presence in Iraq. As recently as last week, Shiite militia Facebook pages were posting clips of what they said was an American plane over Anbar. They said the plane was being used to transport IS fighters. The Iraqi government and the Ministry of Defence have denied the stories and tried to put a stop to the rumours but some Iraqis still believe the tall tales. 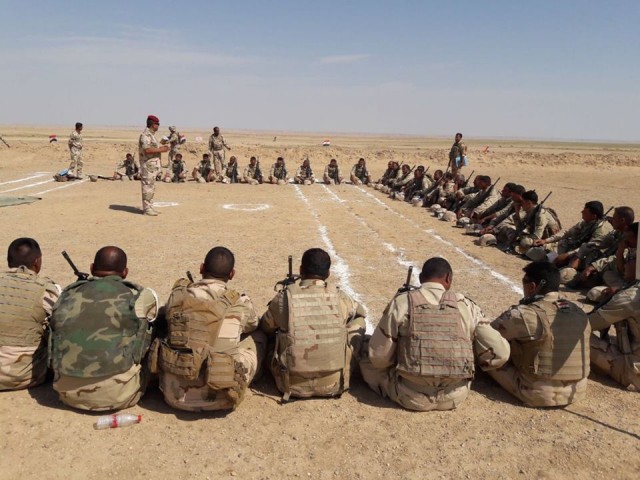 The Iraqi army in the Al Qaim area.

“The US forces, the Iraqi army and the Syrian army are coordinating to control the borders north of the Euphrates river,” a member of Anbar’s provincial council told NIQASH off the record. “The Syrian army and Shiite militias are in control of border areas south of the Euphrates river. It is a complicated but useful equation in terms of defending Anbar. But there is a chance it could all collapse because of tensions between the two groups,” the council member admitted.

“Anbar is always under threat from the extremists and we need the US to help us secure our borders,” he noted. “But we also need the militias to fight the extremists.”