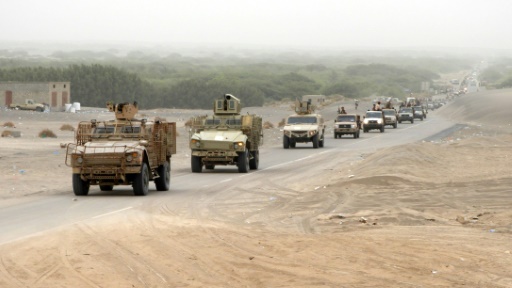 Pro-government troops began the assault despite mounting international fears about the humanitarian fallout, pressing toward Hodeida airport south of the city after receiving a “green light” from the coalition.

By Wednesday night, the offensive remained on the outskirts of the rebel-held airport.

The Red Sea port, controlled by the Iran-backed Huthi rebels who hail from northern Yemen, serves as the entry point for 70 percent of the impoverished country’s imports as it teeters on the brink of famine.

The official United Arab Emirates news agency WAM confirmed that the operation was ongoing “with the participation and the support, through land and sea and air, of the Emirati armed forces”.

It added that the attacking forces managed to “liberate areas… in the surroundings of the airport” and captured and killed “dozens of Huthi” rebels.

The UN Security Council will meet on Thursday for urgent talks on the offensive, diplomats said, after a request from Britain. The closed-door meeting will be the second this week on the Yemen crisis.

The request came after the UN envoy for Yemen, Martin Griffiths, said he was still holding negotiations on keeping the key port open to aid deliveries. 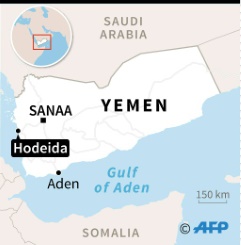 “We are in constant contact with all the parties involved to negotiate arrangements for Hodeida that would address political, humanitarian, security concerns of all concerned parties,” he said.

The European Union’s foreign policy chief warned of the “devastating” impact the assault would have.

“The latest developments will only lead to further escalation and instability in Yemen,” Federica Mogherini said in a statement.

The coalition insisted its humanitarian aid response would go in parallel with military operations.

The two countries also said they would operate a dedicated shipping lane to Hodeida from Abu Dhabi and the southern Saudi city of Jizan to deliver food and medical supplies.

In Hodeida, people waited anxiously for the fighting to reach their neighbourhoods. Those contacted by AFP said Huthi fighters had fanned out across the city.

Coalition sources said the alliance carried out 18 air strikes on Huthi positions on the outskirts of Hodeida on Wednesday.

The UAE armed forces said on Wednesday night that four Emirati soldiers were killed in Yemen, without specifying when and where.

The city of Hodeida, home to 600,000 people, was captured by the insurgents in 2014 along with the capital Sanaa.

Saudi Arabia, the United Arab Emirates and a bloc of other countries intervened in Yemen the following year with the goal of restoring the government to power.

The coalition accuses the Huthis of using the port to secure Iranian arms, notably ballistic missiles the militants have increasingly fired into Saudi territory.

Yemen’s government said Tuesday that negotiations had failed to force the rebels from Hodeida, and that a grace period for UN-led peace efforts was over.

– Children in the crossfire – 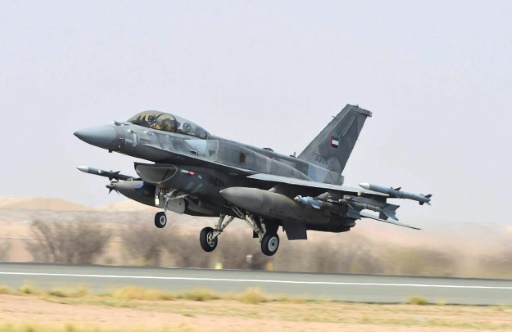 WAM/AFP/File / HO. A handout file photo released on April 4, 2015 by the UAE news agency WAM shows an Emirati F-16 fighter jet taking off before raids against Huthi rebels in Yemen.

Emirati diplomats have insisted that similar large-scale offensives had improved the lives of Yemenis elsewhere.

Hassan Taher, the official Hodeida governor based outside the city, said Wednesday that Yemen’s government would ensure aid deliveries throughout the offensive.

“We want a rapid war, but it won’t be finished in two days,” Taher told AFP.

The International Committee of the Red Cross said any battle for Hodeida would exacerbate the suffering of the population.

“Life-saving items cannot be given to those in need while fighting is ongoing,” ICRC Middle East director Robert Mardini said in a statement.

The UN children’s fund, UNICEF, has raised alarm over the plight of Hodeida’s 300,000 children and the risk that drinking water supplies will be disrupted. 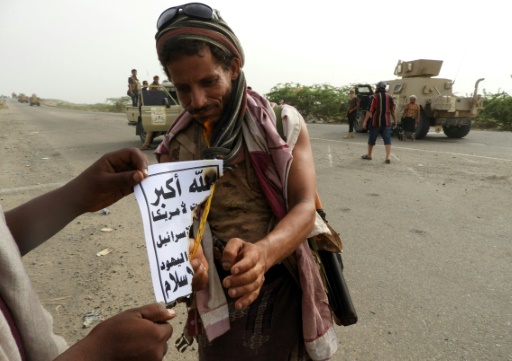 AFP / NABIL HASSAN. A Yemeni pro-government fighter burns a leaflet showing the banner of the Huthis which reads “God is the greatest… Death to America, death to Israel, cursed be the Jews, victory for Islam” in this picture taken at Al-Durayhimi on June 13, 2018.

“UNICEF has pre-prepositioned supplies in Hodeida: over 20,000 basic hygiene kits… We hope we don’t need to use them,” its Yemen representative Meritxell Relano said on Twitter.

The Huthi leadership on Tuesday called on the international community to “pressure a halt to the escalation”, warning an assault on Hodeida would put Red Sea navigation at risk.

On Wednesday, the Huthis said they targeted a coalition warship off the coast of Hodeida with two missiles, with rebel outlet Al-Masirah claiming a direct hit.

As the offensive got under way, Saudi Arabia’s ambassador to Yemen was defiant.

“Hodeida will be liberated, and the Yemeni people will gain back a major artery of life,” he tweeted.