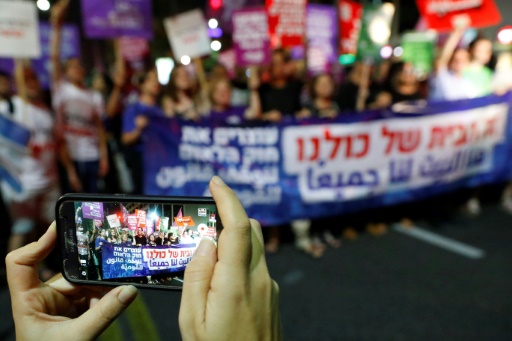 Jerusalem (AFP) – An Israeli Arab lawmaker resigned on Saturday and branded the parliament “racist” after it passed a controversial new law which declares Israel the nation state of the Jewish people.

The new legislation speaks of Israel as the historic homeland of the Jews and says they have a “unique” right to self-determination there. It also revokes the longstanding status of Arabic as an official language alongside Hebrew.

Zouheir Bahloul, of the opposition Zionist Union party, said he could not face telling his grandson that he remained part of the same chamber which passed the law.

“I am resigning from the Knesset,” he said on Reshet TV, in reference to Israel’s parliament.

“The nation state law officially, constitutionally, removes the Arab population from the path of equality in Israel,” he said in Hebrew.

“Should I sit on the fence? Should I give legitimacy to this destructive, racist, extremist parliament?”

Bahloul said that his resignation would officially take effect when parliament returns from its summer recess in September, but he pledged not to reconsider in the meantime.

“I faithfully promise that I shall not go back,” he said.

After the law was approved earlier this month Arab members of parliament branded the legislation “racist” and ripped up copies of the bill in the Knesset chamber.

Arab citizens make up some 17.5 percent of Israel’s more than eight million population.

Leaders of Israel’s 130,000-strong Druze Arab community, which unlike Muslims and Christians is subject to the military draft, has filed a challenge to the law with the country’s Supreme Court.

“Prime Minister Netanyahu made no commitment and said that he would continue to hold consultations,” the premier’s office said in a statement.

He voted in favour of the law and has since reportedly received death threats.

Featured Photo: AFP/File / JACK GUEZ. Protesters in Tel Aviv rally against the controversial legislation on July 14, 2018, before the bill was passed by lawmakers.