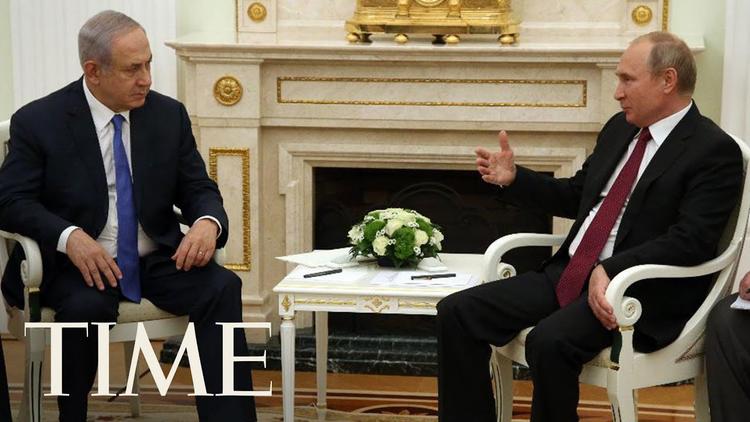 The inside-the-beltway crowd was absolutely outraged and appalled by Trump’s performance at Helsinki. There, Trump violated all the principles of American hawkishness. He sat next to Vladimir Putin, leader of a rival power, signaling that Russia is a peer. He sided with Putin over the assessments of the CIA, the NSA and other US intelligence organizations (they are 16, and mostly redundant since they are under pressure to conform to one another). He denied Russian attempts to influence the 2016 elections. He declined to press Russian president Vladimir Putin on his annexation of the Crimea or border clashes with Ukraine, or the poisoning of his critics while they were in the UK, or Putin’s crackdown on the press and on his political opponents.

While Putin’s behavior has been objectionable, there is something profoundly hypocritical about the US elite pretending that the US doesn’t embrace people like Putin all the time.

Take Israeli prime minister Binyamin Netanyahu. He is guilty of most of the same infractions held against Putin. Netanyahu openly campaigned for the Republican candidates in 2012 and 2016. He openly interfered in US politics by insisting on addressing Congress to derail the Iran nuclear deal (a quest in which he ultimately succeeded, putting the US closer to war footing with Iran).

In fact, Netanyahu was one of those foreign influencers pushing Trump to do a “grand bargain” with . . . Vladimir Putin. The Israeli leader allegedly pushed for lifting of US sanctions on Putin and his circle in return for Putin pushing Iran out of Syria. (Note that in this scenario Netanyahu makes out like a bandit but the US gets almost nothing in return for essentially recognizing the Russian annexation of Crimea).

Netanyahu runs spy rings against the United States far more aggressive and extensive than those of European countries, the seriousness of which Congressional staffers have found “sobering.”

Netanyahu is in the process of annexing the Palestinian West Bank, to which he has much less claim in international law than Putin does to the Crimea. (The Soviet Union assigned Crimea to Ukraine only in the 1950s, when the latter was a Soviet socialist republic, but Russian possession of it went back to the eighteenth century). Netanyahu is presiding over an Apartheid state in which 4.5 million of the 12.5 million people controlled by the Israeli government are stateless and besieged or patrolled by the Israeli military.

Netanyahu has even had people poisoned.

So in Trump’s fanboy performance with Putin in Helsinki, Trump waxed lyrical about how close the US is to Israel, and did opine that Iran needed to leave Syria. Nobody in DC is complaining about that piece of sycophancy.

In Washington, it is all right to slam Trump for treason (it isn’t really treason since the US isn’t at war with the Russian Federation) or for making nice with Putin despite the latter’s various misdeeds. But it is political death to criticize Netanyahu’s interference in American foreign policy or aggressive Israeli land theft or Israel setting the US up for conflict with Iran.

But there is no domestic Russia lobby, so it is all right to slam Putin.