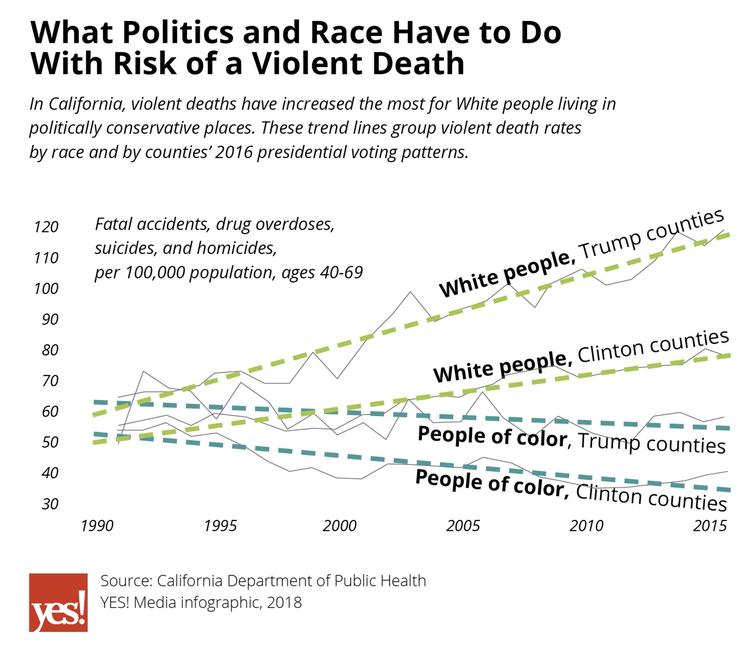 President Donald Trump’s core supporters consist of 60 million to 80 million American adults, 90 percent of them White and four-fifths age 40 and older. They score high on unofficial measures of “racial resentment,” anger at perceived “loss of status” and victimization of White Christians, fearfulness, and support for authoritarianism. Are these psychological tendencies the cause or consequence of alarming social trends that are only just now getting attention?

Trump and right-wing pundits accuse immigrants, urban gangs, and their liberal “abettors” of inflicting epidemics of violence, drugs, violent killings, and “crime, crime, crime” on Americans. Reality is the opposite. It’s Trump’s own mostly-older, White constituencies who are suffering and perpetrating surging crises of lethal self-destruction, crime, and violence.

My national analysis last year detailed the startling fact that Whites living in suburban, small-town, and rural areas surrounded by other Whites are in much more danger of violent and premature death, including suicide, homicide, gun fatality, drug overdose, and related “deaths of despair” than Whites living in or around multiracial cities. Whites show worse social trends than non-Whites, and Whites in remote exurban and rural areas show by far the worst trends and highest violent death rates of all. Despite Trump’s and Attorney General Jeff Sessions’ baseless condemnations, “sanctuary cities” that adopt pro-immigrant protections are especially safe for Whites.

Older Whites in California’s Trump-voting counties are not simply a political tribe apart in a liberal state. They are suffering uniquely serious increases in rates of violent and premature death (four-fifths linked to drug and alcohol abuse) as well as in violent, property, and drug crime and imprisonment.

The unheard-of is now reality: Older Whites in mostly small-town and rural Republican areas are more likely to be arrested for criminal offenses and imprisoned than people of color living in urban, Democrat-voting counties—the same ones that include supposedly gang- and immigrant-infested (to paraphrase Trump’s epithet) Los Angeles, Oakland, and other sanctuary cities.

In recent decades, aging Whites in Republican areas have suffered radically different trajectories than non-White Californians and Whites living elsewhere in the state. Among middle-aged Whites in Trump-voting counties, since 1990 drug abuse deaths have skyrocketed by 270 percent (six times the increase among other populations) and suicide rates rose 50 percent while violent deaths and violent, property, and drug crimes have surged. Meanwhile, younger and non-White groups saw declines in most problems.

So drastically have trends shifted that a White middle-aged person living in a Trump-voting county is now more in danger of dying from a violent cause than a Black or Latino young adult living in a large city—the very cities many Whites fled out of fear of drugs and violence.

Policy reforms by themselves are unlikely to assuage the angry, xenophobic fears among millions of Whites.

White epidemics in Trump-voting counties are exacerbated by conservative politics, which has led to the defunding of treatment and rehabilitative services and the increased funding of get-tough criminal justice policies, including jailing and imprisonment rates averaging 60 percent higher than in Clinton-voting counties.

Of course, this is not the message Trump and right-wing media delivers to those troubled areas. Instead, those White populations are prodded to scapegoat immigrants and liberalism for their troubles.

Liberals have failed to understand that the growing freedoms and racial and lifestyle diversity celebrated by many people, including younger urban Whites, as benefits of the modern era and urban living are seen as apocalyptic threats by many aging Whites.

An ominous precedent looms. In the 1990s, Russia’s explosions in suicide, alcohol poisonings, crime, and murder were 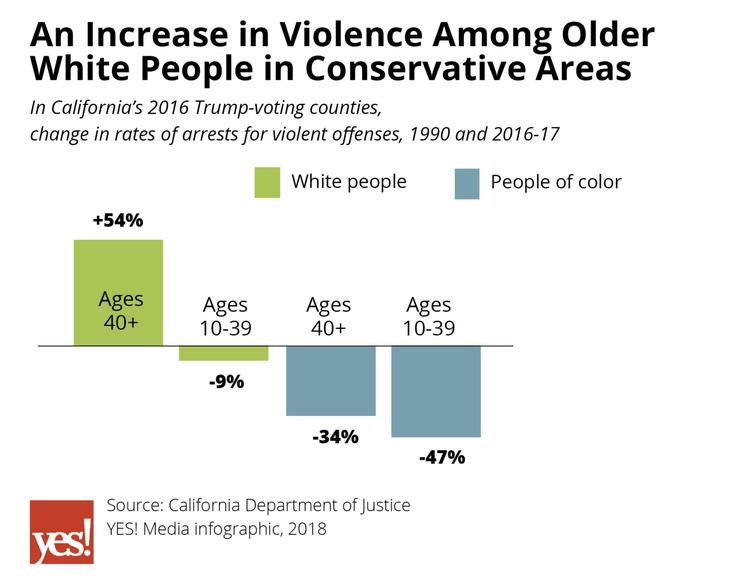 Fortunately, California’s more-liberal leaders have responded to those crises not with the exclusionary, race-baiting demagoguery, but by implementing strong reforms and community-based services to replace the punitive polices that marked the state under Republican governance in the 1980s and ’90s. A more humane consensus may be emerging. Voters in urban Democratic counties approved by a 2-1 margin a 2016 initiative to reduce incarceration for many drug and property offenses and expand rehabilitative services—as did a bare majority of voters in the 25 conservative Republican counties that previously had opposed justice reform.

However, policy reforms by themselves are unlikely to assuage the angry, xenophobic fears among millions of Whites. The six-year economic recovery under former President Barack Obama created 4 million new jobs among Whites and boosted Whites’ real median annual family incomes by $3,200 (more than for other races), with the stimulus money and benefits concentrated in Midwestern states. In California’s Trump-voting counties, middle-aged Whites’ family incomes, though lower than in Clinton-voting counties, still top $65,000 annually. These are hardly the statistics of victimization. Yet, these aging White populations have become more bitterly angry, embracing Trump, rightist paranoia, and vilifying change and modernism.

Since 1990, 2 million White people have left California, more than replaced by 12 million non-Whites, many of whom are immigrants. The sunny result is that California’s economy is booming, democracy is flourishing amid electoral reforms, green- and job-friendly strategies proliferate, the opioid epidemic has been less severe than elsewhere, and crime and violence have plunged to record lows.

Is California a model? Perhaps partly. Its current successes indicate fear of change and diversity are unwarranted. In fact, Whites’ own fears underlie their worst endangerments. Whites in cities are safer and appear more comfortable with change. But fact is not the currency of pro-Trump fervor, and time has not softened their anger. As long-term solutions for reversing these social trends remain elusive, more immediate goals include policies to safeguard the well-being of threatened populations such as immigrants, LGBTQ, and urban non-Whites—policies that may well benefit conservative Whites as well.

Mike Males wrote this article for YES! Magazine. Mike is senior researcher for the Center on Juvenile and Criminal Justice, San Francisco.