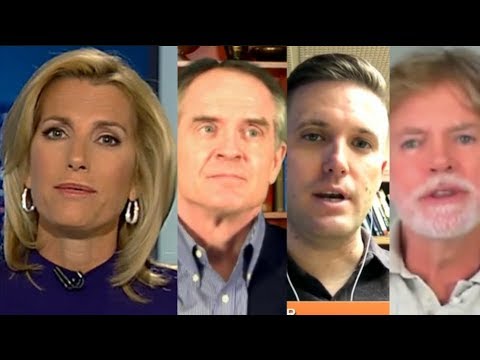 Professional bigot Laura Ingraham, ensconced in the primo 10 pm slot at Fox Cable News, has delivered herself of one of her typical Know-Nothing pronouncements on immigration to the US.

Laura Ingraham: "The America we know and love doesn't exist anymore. Massive demographic changes have been foisted on the American people, and they are changes that none of us ever voted for, and most of us don't like … this is related to both illegal and legal immigration" pic.twitter.com/s5G2qIY4W0

First of all, the fourth wave of migration to the US has not been unprecedented, as indicated by the word “fourth.” There have been previous waves. One of them unfortunately produced Laura Ingraham. Taken together, these waves of immigration produced ‘the country we love.’

Second, the 1965 immigration law was crafted by the elected representatives of the people of the United States, i.e. Congress. It isn’t true that ‘we’ didn’t vote for it and don’t want it. Immigration-haters are always posing as the true voice of the people. “We weren’t asked!” they say. But the people were asked. In fact, because of Martin Luther King Jr. and the Civil Rights movement, the people were embarrassed by 1965 at the Nazi immigration law of 1924 that set quotas for immigration essentially by race. And the current law was crafted by Southern white representatives and senators in hopes of favoring northern European immigration– that was the reason for the bias toward family unification and “chain migration.” They had mainly admitted French, British, Scandinavians, etc. since 1924, so they hoped they could privilege that group. Unfortunately for white supremacy, the Europeans got to be well off in their own countries and stayed there, and it was Asians, Latinos and Africans who wanted to come, and then the family unification provisions unexpectedly helped them . The racists were hoisted on their own petard.

In 1900, midway through the third migration wave in US history, there were only about 76 million Americans. Between 1880 and 1924, some 20 million persons immigrated into the US. That is, the newcomers constituted on average 25 percent of the national population. That was a slightly bigger demographic change that the one the US has been experiencing since 1965. Since 1965 about 59 million immigrants have come to the US, though there aren’t that many now because some have died and some have returned home. The US population midway through that process was about 250 mn. So that is less than 25%.

Laura Ingraham’s maternal grandparents were immigrants from Poland, Michael Kozak and Carolina/Caroline Mazur. Her Polish-American mother worked as a waitress into her early 70s.

The white Protestant Kansas City Star saw Polish immigrants as uneducated, lacking in skills, lazy and in general “undesirable,” and called for a halt to immigration from Poland as early as 1895:

“Even if there was a time when unrestricted immigration was a benefit to a new country, with its great areas of unsettled lands and a limited population, it does not follow that the legislation or non-legislation of that time should prevail with a great continental empire which, in myany places, has a crowding population. In the decade, 1820-1830, 128,293 immigrants arrived in the United States; in the decade, 1880-1890, 5,246,613 immigrants arrived. Anyone can very readily see a great difference of conditions. Should there not have been a difference in legislation and regulation to meet it?

[The northern Europeans come educated and skilled.] “Later came the swarming immigration from Austria-Hungary, Poland, Italy and Russia. These represent the poverty of their native countries, the laborers who work for the lowest wages or the class who do not work at all. These, too, are the most ignorant; they cannot read or write their own or any other language. Is there any reason why this latter immigration should be welcomed as was the former? Is there any reason why it should be welcomed at all?”