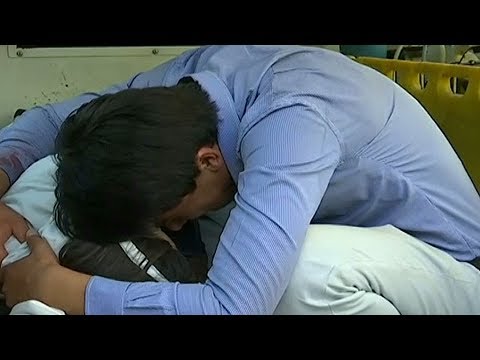 (San Francisco ( 48hills.org) – President Donald Trump is back on the stump, trumpeting his alleged triumphs since the 2016 elections. Somehow, he never mentions Afghanistan.

For years, Trump has denounced endless foreign wars, including Afghanistan. He tweeted in 2012, for example, that Afghanistan is “a complete waste….Time to come home!”

Once in power, however, Trump filled top advisor and cabinet positions with generals and neocons who advocate permanent occupation of Afghanistan. He suddenly became interested in the country’s estimated $1 trillion in rare earth minerals vital to manufacturing high tech products such as cell phones.

Then one year ago Trump announced plans to send 4,000 more troops to Afghanistan. At the time, I and many other commentators said a few thousand more troops couldn’t possibly shift the tide of war when 100,000 failed under Obama.

And, sure enough, the military situation has gotten worse for the US and its corrupt allies in Kabul. The US intensified its air war. The Taliban retaliated with devastating attacks on Kabul and other major cities. On August 10, in only the latest example, the Taliban attacked and held the key city of Ghazni for several days.

An estimated total of 110,000 Afghans have died in the conflict.

US taxpayers have spent over a trillion dollars on the war so far, not counting the billions in future veteran’s benefits.

Kathy Kelly — co-coordinator of Voices for Creative Non Violence, which supports humanitarian work in Afghanistan — told me her group has long advocated that all US and allied troops should pull out, and the US should pay reparations for its war of destruction.

“This is a failed war, as are all wars,” she said.

During my first reporting trips to Afghanistan in the aughts, I stayed in inexpensive guest houses, walked to interviews when practical, and visited sources in their homes. Those days are long gone.

Dr. Hakim Young, a physician originally from Singapore, has seen dramatic changes during his 14 years of humanitarian work in Afghanistan. Today any government building could be attacked by insurgents, even the military and intelligence headquarters in Kabul.

“We avoid government, political and religious buildings,” he told me from Kabul. “We vary daily movements and schedules.”

Even talking or walking with a westerner can put local Afghans in danger because of popular anger at foreign occupation.

So they try not to be noticed by dressing in local clothes.

“It helps that I look like an Afghan,” said Dr. Hakim, “and speak their language.”

He said among Afghans in general, “the mood is one of stress, trauma, uncertainty, insecurity, frustration, anger, distrust and hopelessness. This mood is reflected in the continual outflow of Afghans seeking asylum elsewhere.”

Warlords in and out of government

Afghans don’t support the Taliban or the Islamic State, the two main insurgent groups. But it’s not like the United States has provided a viable alternative. The United States is allied with brutal, drug dealing warlords.

Recently General Abdul Rashid Dostum was back in the news. He’s a warlord with a long history of human-rights abuses, and was accused of beating and raping a rival. Oh, did I mention, he’s also Afghanistan’s first vice president.

Last year, he fled to Turkey in the middle of the night. Dostum’s supporters among the Uzbek ethnic minority have recently engaged in violent demonstrations against the government. In a surprise move, Dostum returned to Kabul in July and was greeted by major government leaders including President Ashraf Ghani. It seems unlikely that Dostum will face trial for the rape, let alone for decades of human rights abuses.

“There are multiple warlords in Afghanistan and the Taliban is just one of them,” Kelly said. “There is no functioning government right now. It’s a failed narco state.”

It’s little wonder that the people of Afghanistan want the US and its corrupt government partners to leave.

The Helmand Peace Convoy, now called the People’s Peace Movement, presents a few rays of hope these days. In March, unknown bombers killed 17 civilians and wounded 55 in the southern province of Helmand. So a group of elders, relatives of injured civilians, and civil society activists set up a peace tent in protest.

They called for a ceasefire between warring factions, opposing the policies of the US, the Taliban, and the Afghan government. Encouraged by the positive response from the public, they marched 400 miles to the capital of Kabul.

Dr. Hakim said people are generally supportive of the protestors. “The Movement has shifted the mood a little,” he said.

“We need to remain optimistic in taking tiny positive actions. The alternative would allow the exploitative, violent actors to worsen the multiple crises gripping Afghanistan.”

When the marchers reached Kabul, among other actions, they held a sit-in at the US embassy.

“If the US can topple a regime in 15 days,” the movement wrote in a statement, “then why has it not been able to bring peace in the past 17 years?”

Reprinted by author’s permission from 48hills.org