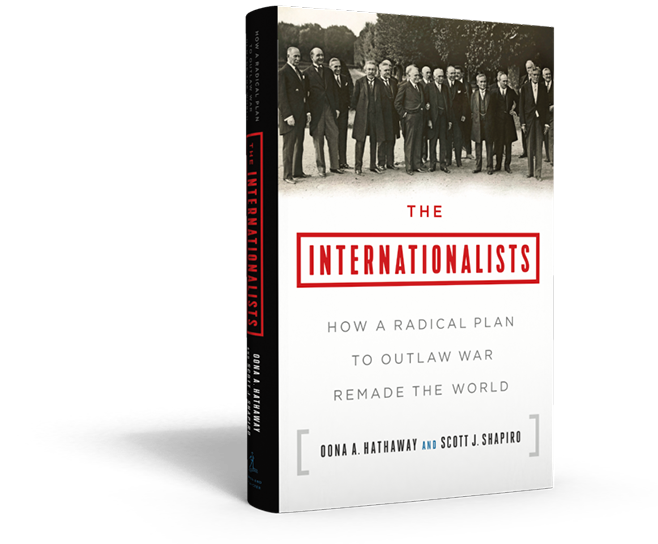 Dubuque ( Waging Nonviolence) – In August 1928, over a dozen countries gathered in Paris to sign the Peace Pact, also known in the United States as the Kellogg-Briand Pact. The treaty renounced “recourse to war for the solution of international controversies” and “as an instrument of national policy.” By 1934, 63 nations had ratified it, making it at the time the most ratified treaty in history. Of course, within a decade most of the world was at war, including all of the original signatories save Ireland.

By Oona A. Hathaway and Scott J. Shapiro,
The Internationalists: How a Radical Plan to Outlaw War Remade the World

The fact that the Peace Pact was followed so soon by the catastrophe of World War II means that today it is either forgotten or remembered mainly as a utopian failure, a cautionary tale about naively thinking humanity can abolish war. But what if the treaty is actually a stunning success hiding in plain sight? This is the claim Oona Hathaway and Scott Shapiro make in their remarkable new book “The Internationalists: How a Radical Plan to Outlaw War Remade the World.” Their ambitious aim is to rehabilitate the Peace Pact as “one of the most transformative events in human history, one that has, ultimately, made our world far more peaceful.”

The book paints a detailed picture of the international order in the centuries leading up to the pact, one in which war was a normal and legitimate tool of statecraft, the primary way states solved disputes and vindicated their rights. Far from lawless, the international system revolved around a set of norms that shaped state behavior, with war the primary punishment for violating the norms.

Two features of this system are especially notable. First, wars to conquer territory for a variety of reasons — collecting unpaid debts, punishing treaty violations, securing new colonies, opening new markets — were ordinary, lawful and created a legitimate title to rule the captured territory. Second, states not participating in a war had strict obligations of neutrality, meaning anything resembling economic sanctions or treating belligerents differently was itself a justification for attack by the disadvantaged party.

The heroes of the story Hathaway and Shapiro tell are the even-then-obscure attorneys and law professors — Americans such as Salmon Levinson and James Shotwell, and Europeans such as Hersch Lauterpacht and Hans Kelsen — who, after the existing international order culminated in the wreckage of World War I, labored to replace it with a different one. Rather than international law’s focus on regulating war, which still sanctioned it, the “outlawry” movement pressed to declare war a crime under international law, recognizing that, like other forms of crime, it might still exist, but denying it legitimacy and organizing the global community to suppress it.

It is a tribute to the movement’s persistence that it eventually convinced political leaders, most importantly the French Foreign Minister Aristide Briand and U.S. Secretary of State Frank Kellogg, to support their efforts, and the 1928 Peace Pact was the result. The fact that the pact was short, vague and did not specify any enforcement mechanisms helped pave the way. States signed on for a variety of motives, many clearly thinking it a largely symbolic endorsement of a noble ideal, and all parties interpreted the pact’s language as still permitting the right to armed self-defense if attacked.

For Hathaway and Shapiro, the key to understanding the Peace Pact’s ultimate influence is seeing it as the start of a transformation rather than its conclusion: “Legal revolutions do not end with the passing of a law. They begin with them.” And it’s true the transformation did not look promising at first. Rising powers resented interpretations of the pact that ruled out new conquests but allowed existing colonial powers to maintain control of previously conquered territory (the book’s examination of Japan’s engagement with international law in the 19th and early-20th centuries is especially illuminating).

Most significantly, by outlawing war the pact removed the only recognized form of international dispute resolution without replacing it, something that also put it at odds with the young League of Nations, which still nominally relied upon war to enforce its decisions, even as most of its members also renounced war in the Peace Pact. The breakdown of the old system without a new one in its place, coming at the same time as a global depression and the rise of fascist expansionism further destabilized the international order, made the decade following the pact’s signing one of “chaos and paralysis.”

If signing the Peace Pact was the first step, it was developments after World War II that “reaffirmed, consolidated, and institutionalized the transformation that began in 1928.” Its renunciation of wars of aggression was incorporated into the founding documents of the United Nations, it furnished prosecutors at the Nuremberg Trials a new tool for holding leaders accountable for launching such wars, and it helped catalyze the web of intergovernmental institutions and nongovernmental organizations that has dramatically shaped the post-war world.

For Hathaway and Shapiro, the key element in this transformation was developing an alternative to war for enforcing international norms, one they call “outcasting.” People often think laws are ineffective without the equivalent of police officers and judges powerful enough to detain and punish those who break them. But Hathaway and Shapiro point to medieval Iceland and other traditional societies to illustrate another approach: expelling lawbreakers from the community’s circle of mutual protection and welfare. Denying the benefits of community membership that people depend upon deters violations of community norms.

Hathaway and Shapiro show how a variety of treaty regimes from the World Trade Organization to the Montreal Protocol on ozone-depleting chemicals to organizations regulating coffee, endangered species, and even international mail delivery all rely on economic sanctions and other outcasting strategies to regulate state behavior. In this way, tools once explicitly outlawed under the rules of war as violating neutrality are now the primary alternative to war in international dispute resolution.

The best evidence for the transformation sparked by the Peace Pact comes from data on trends in armed conflict. While wars to conquer territory from another state have not disappeared, as the Russian annexation of Crimea demonstrates, they have become extraordinarily rare. As Hathaway and Shapiro detail, the frequency of military conquests and extent of territory involved have both collapsed since World War II. In the century before the Peace Pact, the average state could expect to be the victim of conquest at least once during an ordinary human lifetime; since World War II, the odds have dropped to between once or twice every thousand years. And the conquests that do take place have become far less likely to persist over time as the rest of the international community denies them recognition and legitimacy. Indeed, even conquests from the pact’s signing through World War II were, with few exceptions, defaulted back to their 1928 status at the war’s end; the data show that the year the Peace Pact was signed marks a crucial break in global patterns of military conquest.

This decline in wars of conquest is a key driver of one of the most important global developments of the last three-quarters of a century: the stunning infrequency of interstate war compared to the historical norm. It turns out the Peace Pact’s vision of ending wars between states has been remarkably successful. Of course, this success is limited. Even with the decline of interstate war, civil wars within states remain a chronic problem in some parts of the world. And post-World War II “outcasting” tools such as economic sanctions, as well as international institutions such as the World Trade Organization, have their own embedded injustices. Nonetheless, for the particular problem of interstate war, which historically accounted for the vast majority of war deaths, the Peace Pact shows how international norms and institutions do matter in ways that can make the world less violent. “The Internationalists” compellingly demonstrates how activists can make a difference, and how global cooperation to end war, while difficult, is not a utopian fantasy.

David Carroll Cochran is professor of politics at Loras College in Dubuque, Iowa, and the author of "Catholic Realism and the Abolition of War" (Orbis Books).