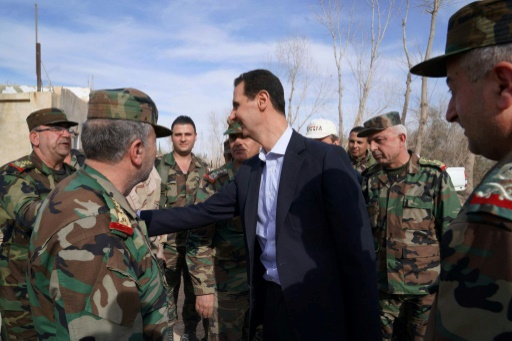 “In Syria, as far as we are concerned, the situation is returning to the previous one before the civil war, meaning there is a clear address, there is responsibility and there is a central government,” Lieberman told journalists while visiting Israeli air defences.

Before the civil war erupted in 2011, the ceasefire line between Syria and Israel was largely quiet for years. 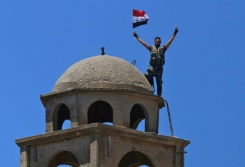 AFP/File / Youssef KARWASHAN. A Syrian soldier waves the national flag atop the Greek Orthodox Church of St. George in Quneitra on July 27, 2018 after rebels fled the abandoned Golan Heights town in the face of a sweeping offensive by President Bashar al-Assad’s forces.

During the conflict, there has been occasional spillover fire to which Israel has responded.

Assad told his troops on Wednesday they were close to victory after inflicting a succession of defeats on rebels.

A series of blistering offensives backed by Moscow and Tehran has forced the rebels out of many of their strongholds, putting Assad’s government back in control of nearly two-thirds of the country.

Israel has sought to avoid direct involvement in the Syrian conflict but acknowledges carrying out dozens of air strikes there to stop what it says are deliveries of advanced weaponry to its Lebanese enemy Hezbollah.

It has also pledged to prevent its arch foe Iran from entrenching itself militarily in Syria and a series of recent strikes that have killed Iranians in Syria have been attributed to Israel.

“We do not interfere or intervene in Syria’s internal affairs,” Lieberman said.

“But this is provided that all three points that are important to us are fulfilled.”

He named them as a strict observance of a 1974 armistice with Syria, not allowing Iran to use Syria as a front against Israel and not allowing Syria to be used as a transit point for advanced arms deliveries to Hezbollah.

Israel seized 1,200 square kilometres (460 square miles) of the Golan Heights from Syria in the Six-Day War of 1967 and later annexed it in a move never recognised by the international community.

Featured Photo: Syrian Presidency Facebook page/AFP / HO. Syrian President Bashar al-Assad greets troops in the Eastern Ghouta district outside Damascus on March 18, 2018, in his first visit after its recapture from rebels in a Russian-backed offensive.