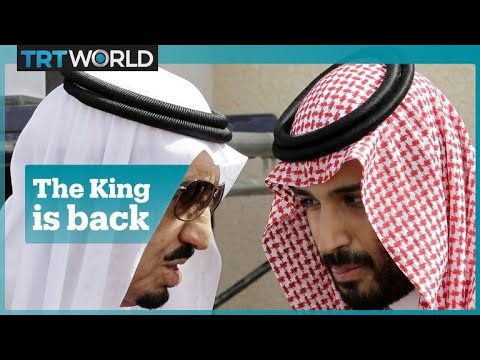 The Israeli newspaper, Haaretz, revealed a letter sent by Saudi King Salman bin Abdulaziz to the White House in which Saudi Arabia expressed its rejection of US President Donald Trump’s peace plan.

Haaretz said in a report that: “Saudi Arabia has informed US President Donald Trump’s administration that it will not be able to support its peace plan between Israel and Palestine, known in the media as the ‘Deal of the Century’, if it does not state that East Jerusalem would be the capital of the Palestinian state.”

Haaretz quoted two diplomats who participated in the peace plan talks as saying: “Saudi King Salman bin Abdulaziz expressed his support for the Palestinian position and assured Arab leaders that the kingdom is still committed to the 2002 Arab peace initiative, which stipulates the establishment of a Palestinian state on the borders of 1967, with East Jerusalem as its capital.”

The newspaper explained that the Saudi king expressed this position in a series of telephone conversations he had recently held with senior US officials, Palestinian Authority President Mahmoud Abbas and other Arab leaders.

King Salman has also issued an urgent order to allocate $80 million to the Palestinian Authority to compensate for the losses caused by the US aids cut-off, according to the newspaper.

Haaretz quoted an unnamed diplomatic source as saying that: “the change in the Saudi position towards the peace plan came as a result of Trump’s recognition of Jerusalem as the capital of Israel and the transfer of the US embassy there.” The source added: “the Saudis informed the US administration: ‘We cannot now implement what we have promised before the US decision on Jerusalem.’”

The newspaper pointed out that “Egypt and Jordan urged the US administration to propose a peace plan if it would be fair to the Palestinian side.” It added that the Jordanians warned Trump’s administration that any biased plan to Israel would cause trouble in Jordan, which would force Oman to reject the proposal.

Reuters news agency revealed this position for the first time last Sunday, as it quoted a senior Arab diplomat in Riyadh as saying: “The United States has made a mistake by believing that one country can pressure the rest of the countries to surrender, but this is not about pressure. No Arab leader could abandon Jerusalem or the Palestinian people.”