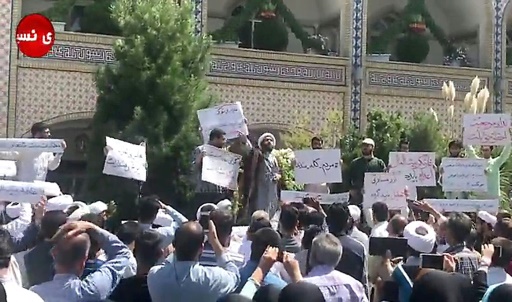 Tehran (AFP) – Iranian protesters have attacked a religious school in Karaj province near Tehran, the conservative Fars news agency reported Saturday, as sporadic protests simmered ahead of the reimposition of US sanctions.

Iranian authorities have barely mentioned days of protests in the major cities of Isfahan, Shiraz, Mashhad and Tehran, driven by concerns over water, the economy and wider anger at the political system.

During past unrest, conservative outlets have focused on attacks against sensitive symbols such as religious buildings as a way of tarnishing protesters.

“At 9:00 pm (1630 GMT on Friday) they attacked the school and tried to break the doors down and burn things,” Fars quoted the head of the school in the town of Ishtehad, Hojatoleslam Hindiani, as saying, giving only his clerical rank and no first name.

“They were about 500 people and they chanted against the system but they were dispersed by the riot police and some have been arrested,” Hindiani said.

Fars acknowledged protests have taken place in “five or six cities” since Tuesday over water shortages, rising prices and joblessness, with “about 1,000 or 2,000 people” taking part.

But it said these peaceful protests were taken over by people “who come into the crowd with political slogans such as ‘Death to the dictator'”. 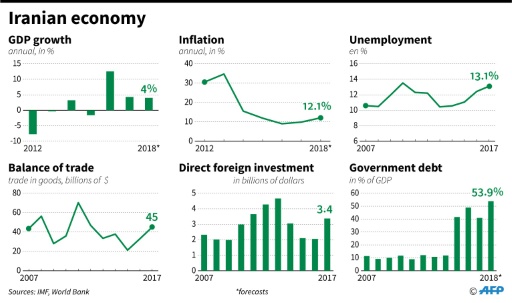 It said this was part of a pre-planned plot by the US, Israel and Saudi Arabia to exploit economic tensions inside Iran.

Because foreign media are barred from observing “unauthorised” protests, it has been impossible to verify any of these claims or the videos of protests spreading on social media.

With tensions high ahead of the return of US sanctions on Tuesday, the government of President Hassan Rouhani also faces opposition from conservatives and religious leaders, who have long disliked his outreach to the West and accuse him of governing only for the rich.

The conservative Qom News published a video of a protest in the holy city of Mashhad after Friday prayers, in which a cleric tells the crowd: “Most of your representatives don’t care about people’s problems.

“Most have two passports and their families are abroad. The judiciary should find these people and arrest them,” the cleric says, to chants of “Allahu akbar” (“God is greater”) from the crowd.

Former hardline president Mahmoud Ahmadinejad, who has fallen out with the conservative establishment since leaving office in 2013, has tried to ride this wave of anger.

In a Wednesday Twitter post, he called on US President Donald Trump to release a list of “relatives of Iranian government officials that have green cards and bank accounts in the United States”, if such a record exists.

So far, social media reports suggest the current protests are far from the scale of the unrest seen in December and January, when at least 25 people were killed in demonstrations that spread to dozens of towns and cities. 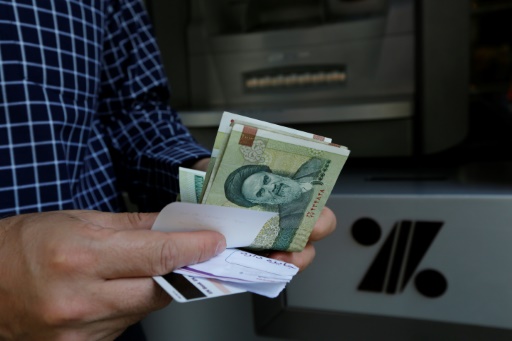 There were allegations at the time that they had been sparked by conservative opponents of Rouhani in Mashhad before quickly spiralling out of hand.

But all Iranians are concerned about the struggling economy, especially since the United States walked out of the nuclear deal in May and announced it would reimpose full sanctions in two stages.

The first phase hits on Tuesday with blocks on financial transactions and imports of raw materials, as well as sanctions on Iran’s automotive sector and commercial aircraft purchases.

Iran Air announced it would take delivery of five ATR aircraft from the French-Italian firm on Sunday, sneaking under the wire before the sanctions return.

Iran says the sanctions are endangering lives by blocking the sale of new planes and spare parts for its ageing fleets.

Iran’s Aseman Airlines was ordered to ground its fleet of ATR planes in February after one of them crashed in the Zagros mountains, killing all 66 people onboard.

Remaining sanctions — including on Iran’s oil and gas sector and central bank — will resume on November 5.

Although smaller foreign firms have vowed to work around the US measures, multinationals such as France’s Total and Peugeot, and Germany’s Siemens have already said they will have to pull out. 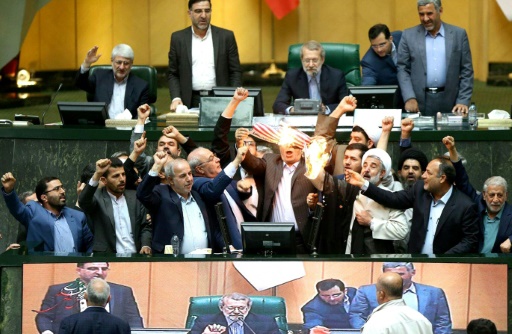 Islamic Consultative Assembly News Agency/AFP/File / HO. Iranian MPs burn an American flag on May 9, 2018, after US President Donald Trump withdrew from the nuclear accord. Picture provided by the Iranian Parliament.

It is not yet clear how all this will affect ordinary Iranians, but a European diplomat in Tehran who monitors the economy said prices of basic foods were already creeping up.

She said the collapse in the rial, which has lost more than half its value since April, was driven by people rushing to secure their savings in dollars because they lack faith in the government.

“There is a massive loss of confidence in the financial system and the government’s ability to control things and withstand sanctions,” she told AFP.

NASIM NEWS AGENCY/AFP / – A cleric speaks to protesters in the holy city of Mashhad on August 3, 2018, from a video by Nasim News Agency.