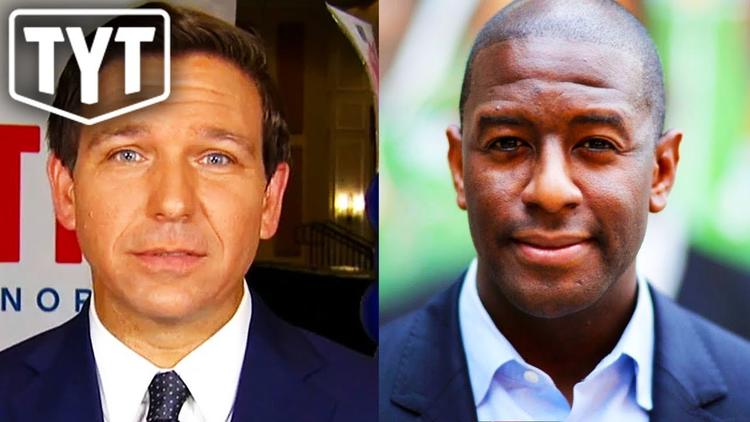 Ann Arbor (Informed Comment) – Congressional representative and Florida gubernatorial candidate Ron DeSantis shocked the nation on Wednesday by warning Florida voters not to “monkey it up” by electing African-American democratic standard-bearer Andrew Gillum, whom he incorrectly described as a “socialist.” Gillum was a Hillary Clinton delegate and voted for her, and his career as mayor of Tallahassee was not characterized by an expanded public sector or by a shrinkage of entrepreneurial opportunities. He does, however, support Medicare for all (i.e. single-payer universal health insurance), which a slight majority of Republican voters say in polling they also support. It has been alleged that DeSantis has been one of 52 administrators of an openly racist Facebook site.

DeSantis played the race card right from the beginning for a reason. Florida is a toss-up state that could go either way. DeSantis is signaling that he will attempt to scare the white business community in Florida silly at the prospect of an African-American governor who cares about the public and not just about the business elite.

Here are the reasons for which Gillum could well win:

1. Florida can go either way, Democrat or Republican and state and Federal at-large elections are often very close. Any Democratic candidate can expect to come within one percentage point of winning a state-wide election there, right off the bat, which means that Gillum is very much in play. We saw this phenomenon in 2000 when whether George W. Bush or Al Gore won depended on some hanging chads and some ballot boxes apparently buried in the Everglades. That close result was no fluke. In 2008, Florida in a profound mortgage crisis went for Obama by 4,282,367 votes versus McCain’s 4,046,219, nearly a 3-point spread for the Democrats. But in 2012, Obama’s margin against Romney was much smaller, slightly less than 1 percent–though Obama did win. In 2016 Trump as Republican reversed this pattern, defeating Hillary Clinton by 1.2% of the vote. These results tell us that Florida can go either way, and this conclusion has been true since at least 2000. The same thing is true with regard to the governor’s office. In the 2014 governor’s race, Republican Rick Scott received 2,865,343 votes. Charlie Crist, a former Republican left behind by the Tea Party who ran as a Democrat, got 2,801,198 votes, thus losing by a margin of about 1 percent.

2. Florida’s demographic make-up is in flux. From 2010 to today, the population has grown from 18.8 million to about 21 million, an 11% increase. Immigrants into Florida tend to be Democrats (true of non-Cuban Latinos, African-Americans, and urban whites and youth). I think Florida is probably slightly bluer today than it was in 2010, despite the close results of state-wide elections mentioned above. As of August 2018, Professor Susan A. MacManus estimates that 40% of Floridians are Democrats, while only 36% are Republicans. Of course, voter suppression measures like voter i.d. requirements and anointing Democratic candidates like Crist who are literally Republicans can give the nod to the other side if they reduce the enthusiasm to come out and vote of Democrats, including minorities. Inability to attract Obama-level support from African-Americans doomed Clinton, as well. Obviously, Gillum at least has a shot at getting the Democratic base, including African-Americans, out to the ballot box.

3. Jerusalem embassy versus the Nazi factor. Five percent of Floridians are Jewish, and the vast majority of them vote Democratic. In the age of Trump and Neo-Nazis in Charlottesville chanting “Jews will not replace us,” Republicans may find it harder to win simply by playing the Israel card (a tactic that never worked against Obama in Florida presidential politics). It all depends on whether they think it is more important that Trump is moving the US embassy to Jerusalem or more important that he thinks anti-Semitic white nationalists are very fine people. DeSantis is a Trumpie, and Gillum might be able to tar him with that brush in Boca.

4. African-Americans comprise about 17% of the population of Florida, but only about 13 percent of the registered voters. (Some 20 percent cannot vote because of Florida’s Draconian law barring ex-felons from the voting booth). Gillum cannot count on their coming out to vote for him simply because he is an African-American. But if he inspires them to enthusiasm, this community could be important to his victory, as it was for Barack Obama. Initial indications are that he is inspiring African-Americans in Florida with a great deal of enthusiasm.

5. The Latino Factor: Slightly over a quarter of the population is Latino, though about a third of them are Cuban-Americans who trend Republican. That leaves 16.6% of the population as non-Cuban Latinos, including persons of Puerto Rican, Mexican, Dominican and other heritage. They mostly vote Democratic, and it would be surprising in the era of Trump if they weren’t pushed even further in the direction of that party. The third who are Cubans are much more in flux than in the past, with some younger Cuban-Americans having supported Obama. Gillum could make inroads here. Likewise, there are now 1.2 million Puerto Ricans in Florida. As American citizens, they can vote for president wherever they are. Hundreds of thousands may have left the island in the botched aftermath of Hurricane Maria. Only 7% say they are Republicans. Whether the newcomers will register and actually vote in Florida is a question mark. But remember that many statewide elections in Florida are decided by small numbers of voters.

6. Millennials trend heavily Democratic, but only 28% say they plan to vote in the midterms nationally. If the Parkland wave in Florida, which Gillum is courting by seeking sensible firearm safety regulation, turns into enthusiasm at the ballot box, it could be significant. Obama famously won the Iowa primaries in 2008 in large part because of the youth vote.
Gillum has to galvanize the youth to vote if he is to win.

7. The environment. Florida is in a crisis caused by algal blooms, which are caused by industrialized agriculture and the run-off into the water of chemicals. Likewise, Florida is perhaps the state most at risk from the negative effects of climate change. Outgoing governor Rick Scott, now running for the senate, has a horrible record on both issues. In the past, that record did not seem to matter, but close local observers are arguing that a sea change is happening even among some Florida Republicans on the environment. It is not a sure thing, but 2018 could be the year when environmental issues came to the fore in Florida politics. If so, DeSantis is toast.

One thing is for sure: the Florida gubernatorial race will be relatively close. And given that nearly half the state is neither white Protestant nor non-Hispanic Catholic, and given the big white progressive vote in Miami-Dade and other urban areas, playing the race card there could backfire big time.