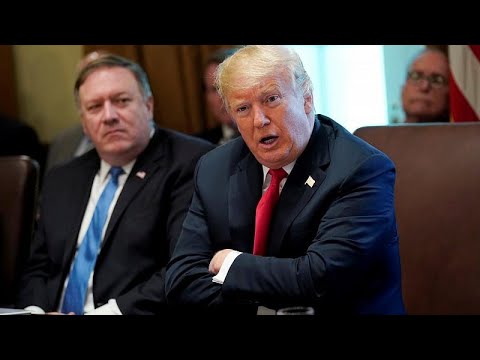 Trump’s domestic woes as an unindicted co-conspirator inevitably make him weak on the world stage. Foreign adversaries don’t take seriously a president who looks as though he might be impeached. And they know that presidents under siege in the capital do not have the leisure to attend to foreign affairs with any concentration. Even friends and allies of the US will find the temptation, of playing on his weakness, irresistible.

Trump abruptly canceled a trip to North Korea by Secretary of State Mike Pompeo on Friday, blindsiding the department, out of pique that N. Korean “denuclearization’ wasn’t going well. Only in Trump’s fevered imagination had that ever been even a prospect. But it seems clear that Pyongyang has no fear of a wounded Trump.

Russian Foreign Minister Sergei Lavrov demanded Wednesday that all non-invited troops had to leave Syria, a clear jab at the US. US National Security Adviser John Bolton had demanded that Russia expel its ally, Iran, from Syria, and this seems to be Moscow’s response

BBC Monitoring reports that the interim prayer leader in Tehran in his Friday sermon said,

“Americans are aware of Iran’s great power and know that the time of hit-and-run is over. They are very well aware of Iran’s regional influence and its relations with other nations and governments. Today tens of thousands of American forces in Afghanistan, Iraq, Syria and in the Persian Gulf countries are within range of Iran’s missiles,” the cleric said during his Friday prayer sermons, which were broadcast live by state-run Radio Tehran on 24 August.”

It doesn’t sound to me like the Iranians are very afraid of Trump.

It doesn’t sound to me as though anyone is.