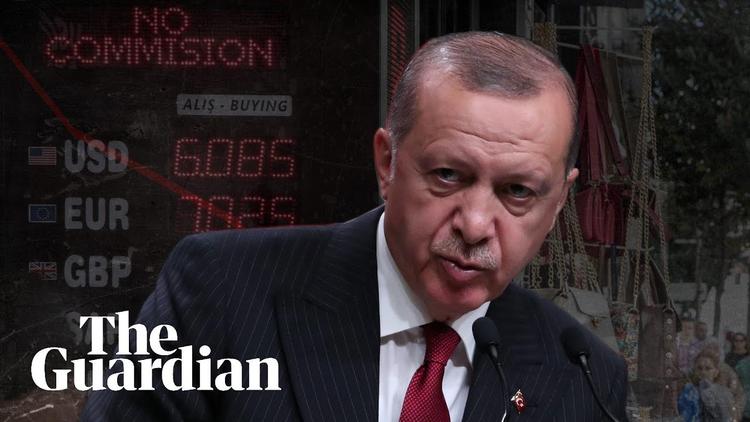 By Can Erbil and Umit Ozlale | –

If you happen to be a tourist in Turkey right now, consider yourself lucky. Otherwise, things look grim.

The Turkish lira has lost as much as a third of its value relative to the U.S. dollar in less than a month and recently hit a record low. As a result, all imported goods became more expensive practically overnight. And because Turkey is heavily dependent on foreign goods, most everything was affected, including gasoline, food, furniture and clothing. Turks are worried that more price hikes and possible shortages of imported medicine are on the way.

The catalyst for the current crisis was U.S. sanctions, which the Trump administration imposed on August 1 after Turkey’s government refused to hand over an American pastor it has detained for almost two years. Turkey responded by doubling tariffs on U.S. cars, alcohol and other goods. More U.S. sanctions may be on the way.

Turkey’s real economic troubles, however, go much deeper than the current spat with the U.S. and extend back many years. And while Qatar has pledged to invest US$15 billion to help Turkey and offered other aid, it does nothing to fix its actual problems.

We’ve been studying Turkey’s economy – the world’s 17th largest – for three decades and recently visited the country, talking to Turks affected by the crisis, from small business owners and CEOs to blue-collar workers and taxi drivers. To understand how it went from the envy of the Muslim world to the verge of collapse, one must first look into Turkey’s recent history.

At the end of 2000, Turkey suffered a banking crisis that resulted in a significant flight of capital and a severe economic recession.

The International Monetary Fund agreed to lend Turkey $19 billion on the condition that it overhaul and restructure its financial system, as well as open up its economy to the rest of the world. As its coalition government began to implement the structural changes, the crisis created an opening for Recep Tayyip Erdogan and his Islamist Justice and Development Party, known by the acronym AKP, which had long been in the shadows of Turkey’s stridently secular republic.

Erdogan offered an “honest” alternative to decades of high inflation and economic and political instability, and voters were eager for a change. Amid doubts both at home and abroad, his party promised to adhere to the IMF program and also said it remained committed to the secular founding principles of the Turkish Republic.

The AKP kept to its pledge and fulfilled the conditions of the IMF “stand-by” agreement. This was helped by its application to join the European Union as a full member, which began in 1999. The process of accession acted as an important anchor and signal of modern Turkey’s economic and social path.

The economy boomed as a result, buoyed in part by strong global growth. Inflation fell to single digits for the first time in about 30 years, the economy expanded an average of 6.8 percent a year from 2002 to 2007 and exports more than tripled by 2012.

There was a dark side to this rosy picture, however. The Turkish economy was becoming increasingly dependent on imports and foreign cash to support much of this growth. When a country imports more goods and services than it exports, it finances the difference by borrowing abroad, creating a current account deficit. This made Turkey vulnerable to the whims of international investors in the event of a crisis.

The costs of ‘endless growth’

Those who warned of the problems lurking below the surface were swept aside as Turkey survived the 2008 global financial crisis with minimal damage and bounced back very quickly, mainly thanks to its restructured financial system after 2001.

While the U.S. and Europe were wallowing in red ink, Turkey’s low levels of household and corporate debt made it a very desirable destination for foreign capital looking for a relatively safe home that offered stable returns. As a result, Turkey’s banking system was awash in low-cost credit, which financed a spending spree by households and corporations.

Meanwhile, the IMF stand-by agreement expired in 2008, and negotiations for a new agreement dragged on until talks were suspended two years later as Erdogan announced Turkey’s “graduation” from the program. Instead, he believed he could propel his economy toward “endless growth” and made it easier for Turkish companies to access loans denominated in foreign currencies. This made them even more vulnerable to a drop in the value of the lira.

This, coupled with the favorable credit conditions, caused the construction sector to boom – particularly among companies closely associated with the government. The central bank’s housing price index doubled from the start of 2010 to the end of 2016.

But all that spending worsened the current account deficit even further. As one illustration of the problem, private sector external debt surged from just 16 percent of GDP in 2003 to almost 40 percent at the end of last year.

But even as we watched these events with growing alarm, Erdogan’s popularity and authoritarianism only grew, and in June, he became president with significantly boosted powers to run the government as he sees fit.

One of the biggest fears now is that the currency crisis will lead to the kind of severe capital flight that crashed the economy in 2001. A recent central bank survey forecasts inflation to reach more than 16 percent by the end of the year.

Making matters worse, Erdogan has been increasing his attacks on the independence of the central bank, historically one of the most trusted institutions in the country. He has already eroded the relative independence of Turkey’s regulators by recently installing his son-in-law as the minister of treasury and finance, one month before the current crisis hit.

This has hurt Turkey’s credibility in the eyes of foreign investors.

Where Turkey goes from here

Back in the 1980 and 1990s, Turkey’s main problem was political instability. Today, the problem is the opposite, too much authority invested in the hands of a single politician, whose popularity and political power have made him unable or unwilling to see Turkey’s crisis for what it is.

Rather than address any weaknesses in the economy, Erdogan has doubled down on blaming the West, particular the U.S., for waging an “economic coup” on Turkey.

So where does Turkey go from here? As we see it, it has four options.

The least likely is a return to the long-abandoned IMF plan, which would put constraints on the easy credit Erdogan sees as essential to economic growth. Since Erdogan denies even the existence of a structural problem in the Turkish economy, this is presumably a nonstarter.

Another possibility is Turkey could implement its own stabilization program, perhaps with some support from the EU, mainly by alleviating Turkey’s short-term problems. However, for a variety of reasons, including past tensions and a lack of financial ties, this seems little more likely than a return to the IMF.

A third option is for Turkey to get more aid or loans from non-Western countries with cash to spare – such as China, Russia or Qatar – to solve its short-term financing problems. As we noted earlier, this will not be enough to resolve Turkey’s severe structural problems. And the high costs would be further estrangement from NATO – of which it is a key member – and more strain on its relations with the U.S.

Of course Turkey’s government could simply continue to deny there’s a problem at all, blame outsiders for everything and use the crisis to further entrench its political authority on the business community. In that sad scenario, the current trends will continue to play out, and Turkey will likely experience even higher inflation, bankruptcies, soaring borrowing costs, more debt and lower growth.

Turkey is entering a Muslim holiday period known as Feast of the Sacrifice. Some Turks may be wondering whether it’s their economy that will be the offering this year.

The Guardian News: “Why has Turkey’s currency collapsed?”