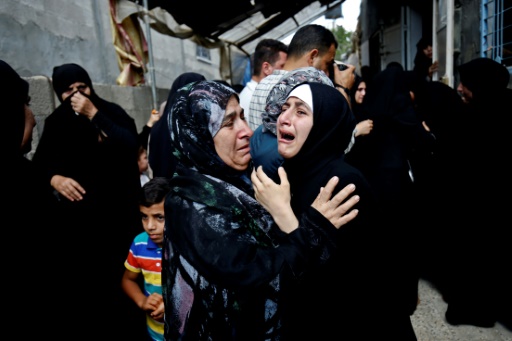 Gaza City (Palestinian Territories) (AFP) – A Palestinian teen died of his wounds Saturday a day after he was shot by Israeli troops during a protest on the Gaza border, the enclave’s health ministry said.

Ahmad Abu Tayoor, 17, was shot late Friday on the border close to the southern city of Rafah, the ministry said.

The Israeli army shot dead another 17-year-old Palestinian, Bilal Khafaja, on Friday and wounded at least 45 others as thousands of demonstrators approached Gaza’s border with Israel in multiple locations.

The military said in a statement on Saturday that it was opening an investigation into the circumstances surrounding the deaths of the two young protesters.

The army also said that it had arrested four Palestinians on Saturday.

They were “armed with a knife and an axe (and) attempted to break through the security fence from Gaza into Israel”, it said on Twitter.

On Friday, Palestinians had set tyres ablaze and thrown Molotov cocktails and grenades towards nearby Israeli soldiers, the army said.

There have been regular protests along the border since March 30 as Palestinians demand the right to return to homes their families fled or were expelled from during the war surrounding the creation of Israel in 1948.

At least 175 Palestinians have been killed by Israeli fire in Gaza since then.

Over the same period, one Israeli soldier was shot dead by a Palestinian sniper.

Israel accuses Gaza’s Islamist rulers Hamas of manipulating the protests and of seeking to use them as cover to carry out attacks.

This week, it closed its only people crossing with Gaza after violent protests damaged the infrastructure.

Israel said it would reopen the passage next Thursday providing the situation is calm.

Gaza has been under an Israeli blockade for more than a decade, and its Hamas rulers have fought three wars with Israel since 2008.

Some 80 percent of the enclave’s two million residents rely on aid, according to the UN agency for Palestinian refugees (UNRWA).

Featured Photo: AFP / SAID KHATIB. A Palestinian relative mourns 17-year-old Bilal Khafaja, killed the day before by Israeli forces, during his funeral in Rafah in the southern Gaza Strip on September 8, 2018 “