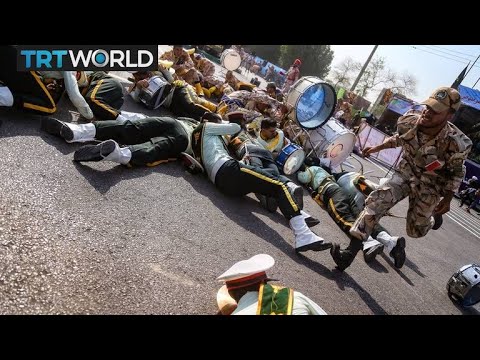 Ann Arbor (Informed Comment) – An attack on a military parade in the city of Ahvaz in Iranian Khuzestan has left over 2 dozen dead and dozens wounded.

The attackers wore military uniforms. All four were killed at the scene (one of the downsides of assaulting a military parade is that there are lots of sharpshooters on duty).

The aim was clearly to spread terror among the civilian population. The target was not, as some Western outlets are saying, the Iranian Revolutionary Guards Corps. It was much more general than that and a lot of civilians were hurt.

In the aftermath, Ayatollah Khamenei blamed two regional neighbors backed by the United States for planning the attacks. This reference was a not very subtle hint to Saudi Arabia and the United Arab Emirates that Iran has its eye on them.

The parade was being held to commemorate the beginning of the Iran-Iraq War of 1980-88, when Iraqi dictator Saddam Hussein sent his tanks into Khuzestan Province. That invasion, unprovoked by any military action on Iran’s part, kicked off a war that went on for 8 years. It replayed WW I on a smaller scale, with trench warfare, lines that moved with glacial slowness or not at all, and the use by Saddam Hussein of mustard gas.

Khuzestan was invaded in 1980 and many of the initial, key battles were fought there as Saddam Hussein emulated Hitlerian tactics such as the Bliztkrieg, a lightning fast tank thrust.

Saddam had two big reasons for invading neighboring Khuzestan. First, it has a huge lake of petroleum underneath it and the Iraqi invasion was carried out in part in hopes of annexing all that oil.

Second, The mixed population of Khuzestan, drawn especially to the city of Abadan by its refineries and oil-related labor demand, included a big local Arabic speaking community. There are about 5 million residents of Khuzestan (Iran’s total population is 80 million, similar to Germany’s). About 1.5 million of these 5 million are Arabic-speakers. In turn, they are fifty-fifty Shiite and Sunni Muslim. This statistic is very important, since it means only about 750,000 of the Khuzestan population is Sunni Arab. Those are the ones among whom a small separatist movement has grown up. It was to recover these Sunni Arabs for the Arab nation that Saddam’s Iraq said it fought a war in Khuzestan. In fact, it was mainly about money.

And there is a small Arab independence movement in Khuzestan, though in the nature of the case I don’t think it can amount to much.

Although ISIL and another group claimed they carried out the attack, Iran is looking at Arab separatist networks in Khuzestan (though convinced that these have regional Arab backing).

The really dangerous thing is that Iran believes Trump had a hand in this terrorist attack, which shocked the Iranian nation.

That doesn’t bode well for the future, since you have these wild men on the American side like John Bolton and Mike Pompeo making policy.