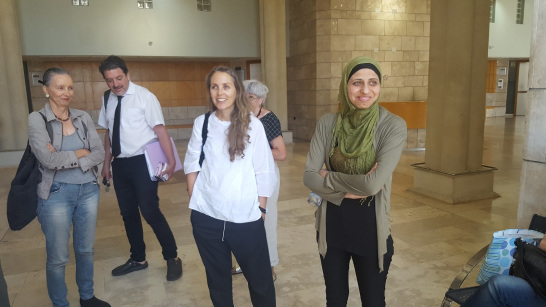 Palestinian poet Dareen Tatour was released early on Thursday after serving a month and a half in an Israeli prison over posting a resistance poem on social media in 2016, accused of ‘incitement to violence’ and ‘supporting terror’ through her social media posts.

“I feel happy to be free after at least three years of suffering in prison and house arrest,” Tatour, an Israeli citizen from the Nazareth village of Reineh, told journalists after being released. “All this suffering was because of a poem I wrote and it makes me sad they imprisoned me for that… At last I’m free and I will continue writing.”

Tatour was sentenced to five months in prison on July 31, 2018, by a court in Nazareth. She had already served three months in detention and nearly three years under house arrest due to a video of herself reading her ‘Resist, My People, Resist’ poem posted on Youtube and Facebook in 2015. During her house arrest, she was eventually allowed to leave the house accompanied for two hours on weekends.

Her case became a cause célèbre for freedom of speech advocates in Israel and abroad. It drew attention to the advanced technology used by Israeli security agencies to trawl social media in order to identify and arrest users suspected of incitement to violence, or of planning attacks.

The 36-year-old poet and activist fought a long legal battle, aided by lawyer Gaby Lasky, arguing her posts were a legitimate protest against the occupation, protected by freedom of speech.

Codepink: “Resist My People, Resist Them” Read In Front of Israeli Embassy