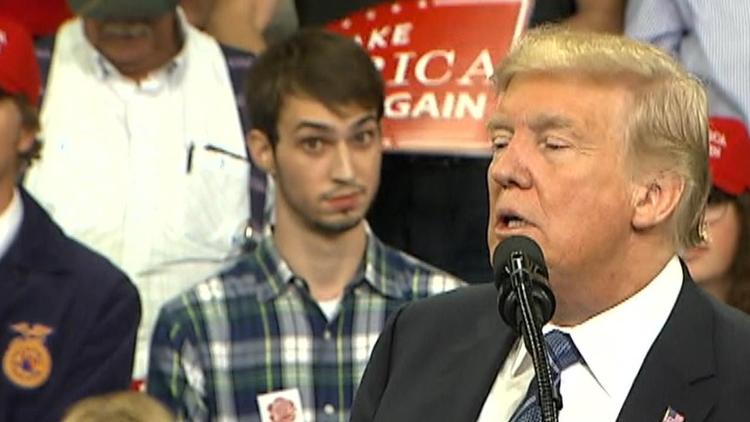 Ann Arbor (Informed Comment) – The most striking characteristic of the tyrant is pettiness.

Trump as president is dangerous. He is volatile. He shouts that he wants people killed, and apparently in large numbers sometimes (“kill them all,” he appears to have said about the Syrian government, and Secretary of Defense Jim Mattis just ignored him. What if he fires Mattis and brings in someone willing to kill at will?)

Trump tries to divide Americans by ethnic group and social class and set them fighting one another in hopes of dividing and ruling. He is nasty. Having put his hands all over women’s bodies all his life without their consent and buying off the ones who objected or might blab, he is now reshaping the Supreme Court so that women entirely lose control over their own bodies to 5 male justices. Brett Kavanaugh admitted that there are no Federal laws governing any aspect of men’s bodies.

One of Trump’s more dangerous features is his brittleness and thin skin. He had the photo cropped of his pitiful inauguration, more a wake for the nation than a moment of hope (whatever the polls say, I think most people knew what they had done as soon as he was unexpectedly elected). He had to try to make it look bigger.

But the most dangerous of all is his pettiness, the jabs at perceived enemies, no matter how minor.

The treatment of “plaid shirt guy” by Trump’s staffers and the secret service assigned to him this weekend at Billings, Montana, is a case in point. Three local high schoolers attended the rally and unexpectedly ended up being very visible behind Trump.

Senior Tyler Linfesty hammed it up, doing double takes or smiling knowingly when Trump told one of his famous whoppers. Trump’s handlers, alarmed by the insufficiently beatific expression on Linfesty’s face, came and got all three of the young students. They appear to have replaced them with Trump staffers. Then the staffers and the secret service agents took Linfesty to a room and kept him there for ten minutes before releasing him.

It is the kind of thing that happens in dictatorships all the time, though of course with worse consequences. But the difference is one of degree, not of kind.

The Canadian media mogul Max Aitkin, Lord Beaverbrook, is said to have met an American actress, presumably at a cocktail party in Toronto, in 1937. He teased her with the question, “Would you live with a stranger for a million dollars?”

“And what about for five pounds?”

He replied, “We’ve already established that. Now we are trying to determine the degree.”

We’ve already established that Trump is a petty tyrant. The question is only the degree of tyranny he is willing to exercise. It was a public event put on by the president, and Linfesty had no duty to smile or clap, and Trump had no right to remove him for not doing so. How many taxpayer dollars were spent on this event? We all paid for it. Trump is not even runnng for anything, he just does rallies in Red states in hopes of stroking his own ego. Billings declined to oblige.

Field Marshall “President” Abdel Fattah al-Sisi, leader of the military junta that seized power in Egypt in 2013, exhibits exactly the same tendencies as Trump. He, however, is unconstrained by any actual checks or balances (his opponent in the last presidential election declared himself a supporter of . . . al-Sisi). The judiciary is packed and the parliament is sheeple.

The secret police take away anyone who frowns while al-Sisi is speaking.

That could never happen in America! Oh wait . . .

Al-Sisi especially minds being made fun of. People put Mickey Mouse ears on him because they think he looks like the famous rodent. That is a big no-no. He routinely has comedians arrested.

Al-Sisi’s government just sentenced 75 members of the Muslim Brotherhood to death for taking part in demonstrations, which turned violent, in August 2013 against his coup.

Trump has, of course, been full of praise for al-Sisi, even has he tears down US allies in Europe. And Trump just sent al-Sisi over a billion dollars in aid. A reward for a job well done. In removing all the plaid shirt guys of the world.