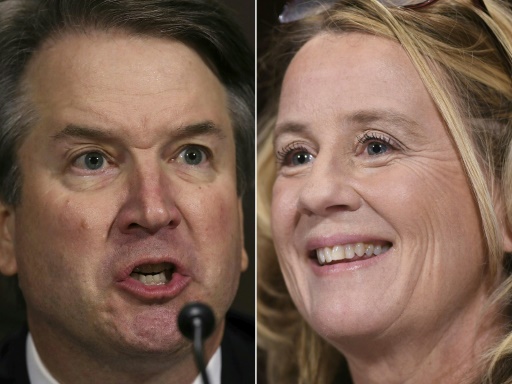 Washington (AFP) – US President Donald Trump hit back Sunday at suggestions his administration is trying to “micromanage” the FBI investigation of controversial Supreme Court nominee Brett Kavanaugh, accusing opposition Democrats of being interested only in obstruction.

Trump on Friday had ordered the new FBI investigation into sexual assault allegations against Kavanaugh, as the Senate delayed a final vote on his confirmation as the key ninth member of the Supreme Court.

The delay followed a dramatic televised Senate Judiciary Committee hearing at which university professor Christine Blasey Ford accused the judge of pinning her down and assaulting her in the 1980s. Kavanaugh vigorously denied the allegations.

“Wow! Just starting to hear the Democrats, who are only thinking Obstruct and Delay, are starting to put out the word that the ‘time’ and ‘scope’ of FBI looking into Judge Kavanaugh and witnesses is not enough,” the president tweeted. “Hello! For them, it will never be enough.”

Both The New York Times and NBC News have cited multiple sources as saying the White House was limiting the witnesses the FBI could question during a one-week background check.

Trump insisted on Twitter that the FBI had “free rein” to pursue the matter as it saw fit.

“I want them to interview whoever they deem appropriate, at their discretion,” the president tweeted late Saturday.

But Democratic members of the Senate Judiciary Committee appear unconvinced.

“The White House and the FBI should release details on the scope of the Kavanaugh background investigation and keep Congress informed on any changes,” Senator Dianne Feinstein, the committee’s ranking Democrat, tweeted on Sunday.

“This needs to be a real investigation and we must get all the facts,” she wrote.

The Times said the FBI would question four witnesses, according to two people familiar with the matter. The list, reportedly drafted by Senate Republicans, did not include former classmates who contradicted Kavanaugh’s testimony about the extent of his youthful drinking and partying.

The Times also reported Sunday that a Yale University classmate of Kavanaugh has accused him of a “blatant mischaracterization” of his drinking, which the judge downplayed in the Senate hearing.

It is illegal to lie to Congress. 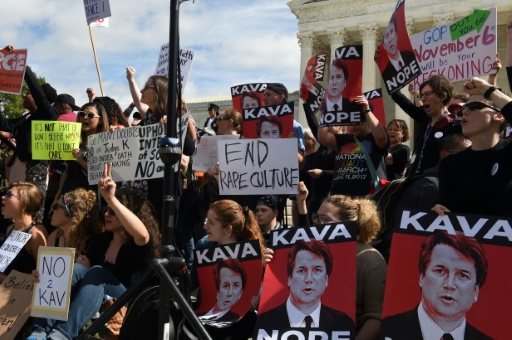 AFP/File / Eric BARADAT. Activists demonstrate against US Supreme Court nominee Brett Kavanaugh in front of the court in Washington, DC, on September 28, 2018.

NBC meanwhile said the FBI was not being allowed to investigate claims by Julie Swetnick, who has accused Kavanaugh of sexual misconduct at drink-fueled parties in his student days.

In a separate report, NBC quoted a senior US official and a second source as saying the limits imposed by the White House on the inquiry remained in place, despite Trump’s tweet.

The bureau has, however, contacted Deborah Ramirez, a Yale classmate of Kavanaugh’s who has said he was sexually aggressive toward her at a party, The Washington Post reported.

Senator Amy Klobuchar, a Democratic member of the Judiciary Committee, told CNN that she was “very concerned” by the reported White House constraints on the inquiry.

“The White House should not be allowed to micromanage an FBI investigation,” she said. “We have to allow them to go ahead.”

Spokeswoman Sarah Sanders insisted that the White House was staying “out of the way,” but also said the inquiry should not be allowed to become a “total fishing expedition” by the FBI.

Asked on Fox News Sunday whether the White House had given the FBI a list of permitted witnesses, she replied, “Not that I’m aware of.”

“The White House isn’t intervening, we are not micromanaging this process,” she said.

Ford’s wrenching testimony Thursday engendered expressions of deep sympathy from many viewers, and scores of women shared accounts on social media of having been victims of sexual aggression.

The recent events also drew a stunning revelation Sunday from one of Trump’s own senior advisers, Kellyanne Conway.

While discussing the case on CNN, she said “I feel very empathetic, frankly, towards victims of sexual assault and sexual harassment and rape.”

Continuing after a brief, somber pause, she said, “I’m a victim of sexual assault.”

She then added that it was unfair to condemn Kavanaugh for an alleged action 36 years ago that could not be confirmed.

While the White House has denied setting limits on the FBI inquiry, Norman Eisen, who was special counsel for ethics under President Barack Obama, tweeted that it would be highly unusual if it were to do so.

“I dealt with hundreds of these as WH Ethics Czar & it is malpractice for WH to rule out Swetnick, Yale boozing” and more, he tweeted.

Featured Photo: “POOL/AFP/File / WIN MCNAMEE, SAUL LOEB. At a dramatic televised hearing, university professor Christine Blasey Ford accused Judge Brett Kavanaugh of pinning her down and assaulting her in the 1980s; he vigorously denied the allegations.”