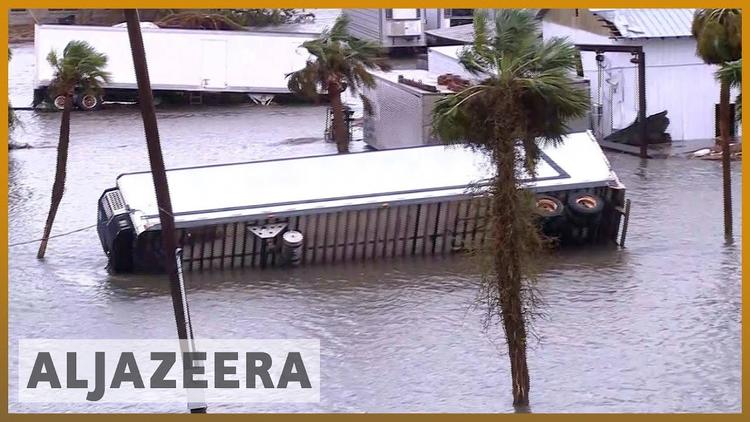 *
WaPo reports of the most powerful storm to hit Florida’s panhandle in recorded history, coming in as a level 4 and briefly becoming 5:

“Hurricane Michael roared ashore Wednesday near the Florida Panhandle, one of the most intense hurricanes to ever hit the United States. With winds as high as 155 mph, the Category 4 storm slammed coastal towns in the area, leveling buildings and structures, flooding streets and leaving a trail of destruction. One veteran storm chaser said that Panama City was so badly damaged it looked like it had been struck by a bomb.”

DeSantis, a former representative in Congress from Florida who voted against measures to deal with the climate crisis, has said that past climate crisis predictions have not proven true (actually the predictions are proving to be way too conservative and not alarmist enough).

DeSantis has said, “The idea that we have the capacity to change or stop the climate, I’m just skeptical.”

If you don’t recognize the cause of a problem, you can’t fix the problem.

Florida emits 227,000,000 metric tons of carbon dioxide (CO2) every year, over 4% of the US national output. It therefore played a role in making Michael into a raging calamity of a sort not seen in the state in recorded history. CO2 is a heat-trapping gas that interferes with the heat of the rays of the sun radiating back out into space after hitting the earth. The more CO2 in the atmosphere, the hotter the oceans and the wetter the air above them, creating conditions for ever more powerful hurricanes.

DeSantis, who has a history degree from Yale but demonstrates an inability to think about change over time that brings shame on that great educational institution, says he doesn’t know whether human activity is causing the climate catastrophe.

Gee, human beings are putting 41 billion metric tons of a heat trapping gas into the atmosphere every year by driving our cars, cooling and heating our homes, making cement, and industrializing our agriculture. A passenger car weighs 2 tons, so this is like shooting 20 billion automobiles into the sky with catapults every year. There are only about a billion passenger cars on the road now worldwide. And then somehow surface ice is melting and the seas are rising and the hurricanes are getting more powerful, and DeSantis scratches his head like an idiot and wonders if there could, maybe, you know, be a connections.

Some dude dumb as rocks shouldn’t be governor of a big important state like Florida.

Florida’s emissions alone are bigger than some countries in the global south. And look at Costa Rica, which makes almost no electricity with fossil fuels.

Manmade climate change does not cause hurricanes in general. Hurricanes form naturally over warm water. The warmer the water, the stronger the hurricane. There were hurricanes before 1750, when human beings decided to burn so much wood and coal (and later, oil and natural gas) that they would turn the whole world tropical.

What human beings have done is to magnify hurricanes by causing billions of tons of heat-trapping gases to enter the atmosphere. We have sort of acted on the climate the way radioactivity works on Dr. Bruce Banner (nowadays played by Mark Ruffalo), turning him into a large, green, angry incredible Hulk.

Heat-trapping gases cause the average surface temperature to rise over time. The oceans are a degree F warmer than the 20th century average.

Hotter water has some basic properties. It expands, so the sea level rises for that reason. But surface ice over land also melts and runs into the sea, which also raises the sea level. The Caribbean is a good half foot higher now than a century ago.

Higher seas lead to higher storm surges. Michael produced 8-foot storm surges, which for residents with houses along the beach was “not survivable.”

How fast and destructive the winds of a hurricane are depends on how hot the water is, over which it travels. Hotter water produces more severe winds. The Caribbean waters have in recent years been unusually hot.

DeSantis should announce an end to his campaign and just go home. He is anyway a huge racialist bigot, as demonstrated by his awful book and the internet groups to which he has belonged. But even worse, his policies will literally sink Florida.

* Some passages in this column were recycled from last year’s on Gov. Rick Scott and Hurricane Irma. If politicians can keep making the same mistakes year after year, I can keep writing the same column.