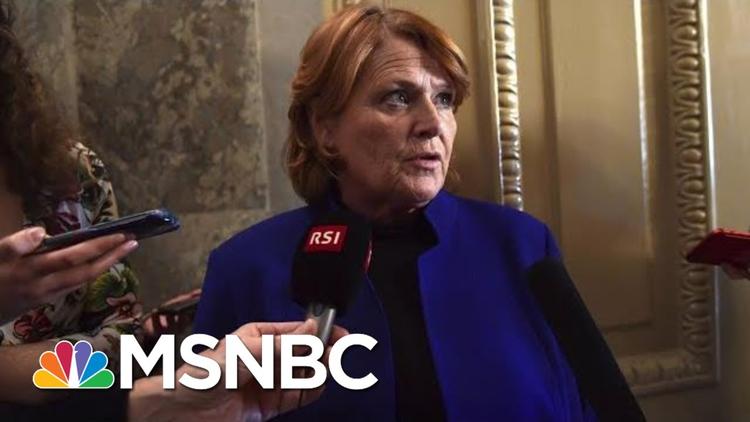 (Informed Comment) – On October 4, Senator Heidi Heitkamp (D-ND) announced that she was going to vote “no” on the confirmation of Brett Kavanaugh to the Supreme Court. Unlike her colleague Jeff Flake who is quitting the Senate, Heitkamp is taking a grave political risk. North Dakota, which had had a 40-point lead for Trump in 2016, is a solidly red state and may vote out this Democrat. She may lose her seat partly because of her stance on Kavanaugh, who has been accused of sexual assault.

When I heard the news about her vote, I was not at all surprised. Her record on standing up for women who have experienced gender violence is outstanding. My research on Native American women had uncovered her work on Savanna’s Act, a bill proposed a year ago but has not even been granted a committee hearing.

Savanna’s Act is named after Savanna LaFontaine-Greywind, a woman who was murdered in 2017. She was eight months pregnant. When the mother of another victim first reported her daughter to be missing, the police told her that she was probably out partying. “‘We were watching her baby. She was breastfeeding him and always contacted us every 4–5 hours.’” Neither the federal or tribal officials were helpful, so she “soon saw that she and her family were on their own.”

Heitkamp writes that “Native women are murdered at ten times the national average, and 84 percent of Native women have experienced violence in their lifetime. In 2016, North Dakota had 125 reported cases of missing Native women . . . but numbers are likely much higher as cases are often under reported and data isn’t officially collected.” Caroline LaPorte, a Native Affairs advocate, notes that the lack of data about this violence is part of the problem. “The result is that Native women die without names and their tribal nations grieve without answers.”

In response to the appallingly inadequate response from law enforcement regarding Native women, then, Heitkamp has sponsored Savanna’s Act. Requiring the federal government to work with the tribal governments, this bill would also set up protocols for handling homicide cases. If passed, this bill would help parents fight for justice for their daughters.

Native women must also confront a rape epidemic because they are twice as likely to be sexually assaulted as other women. Traditionally, the White colonizers had regarded these women as part of the land grab. Another historical dimension to the sexual violence against the women is forced prostitution. A century before the term “human trafficking” was coined, the Dakota tribes had to either sell their daughters for food or watch them starve to death. The women were so desperate for food that they “collected what little corn they could at the fort, often sifting through horse manure in order to find enough grain to make soup.” Today, Native girls are still being sold for prostitution.

The Bakken oilfields have provided an economic boom for North Dakota, but it has also increased the risk for children to be forced into prostitution. Besides the oil boom, another driving force for the trafficking of Native girls is the rise of heroin use. Heitkamp’s advocacy on behalf of these trafficking victims included a hearing in 2013 to publicize the issue. She has also co-sponsored the Stop Enabling Sex Traffickers Act in 2018, which cracks down on websites that advertise for traffickers.

If this senator loses her seat, it is doubtful that her successor or anybody else would continue her work on behalf of Native women and other victims of gender violence. It is also unlikely that Savanna’s Act will ever be passed, probably because so few people care about this issue. Moreover, the majority of perpetrators who assault and murder Native women (who are mostly non-Native) may never face the justice they deserve. I understand Heitkamp’s decision to risk her Senate seat on behalf of the women who have spoken out against Kavanaugh. And I certainly applaud her courage. If she leaves the Senate, though, those facing gender violence—especially Native women—would lose a valuable ally.

Quote from mother: Guha, A. (2017). Will Congress Do Something About Missing, Murdered Native Women? Rewire. Retrieved from https://rewire.news/article/2017/10/10/will-congress-something-missing-murdered-native-women/

Dakota tribe quote: Pember, M.A. (2017B). Can this South Dakota shelter heal the centuries-long trauma of Native women? The Guardian. Retrieved from www.theguardian.com/us-news/2017/sep/02/south-dakota-sex-trafficking-victims-native-women-crow-creek