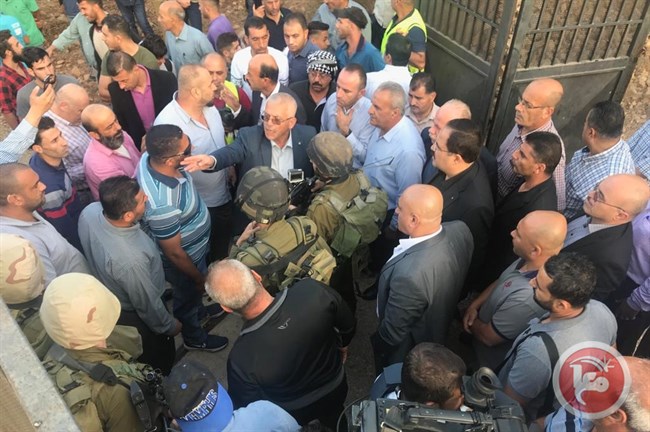 NABLUS (Ma’an) — Dozens of Palestinians participated in a protest against an Israeli army order to close a Palestinian high school in the al-Lubban village south of the northern occupied West Bank district of Nablus, on Monday, forcing the Israeli army to back down on the decision.

Local sources told Ma’an that Palestinian families and officials participated in a protest against the closure of the al-Sawiya school, seemed to have forced the Israeli army to back down on its earlier decision.

The Israeli army was to close the al-Sawiya high school, located on the Ramallah-Nablus road, under the pretext that students threw stones at Israeli soldiers nearby.

Israeli forces sealed off roads leading to the high school, in an attempt to prevent students from reaching it.

Meanwhile, as Palestinians began to peacefully protest the closure, Israeli forces attacked protesters and students at the school, causing clashes to break out.

Israeli forces also locked several students inside the school, preventing them from leaving the premises during clashes.

Medical sources confirmed that the head of the al-Lubban village council, Samer Owais, was injured with a rubber-coated steel bullet fired by Israeli forces during the protest, while many others suffered from tear-gas inhalation.

Among the ones suffering from tear-gas inhalation was the Palestinian Minister of Education, Sabri Saidam.

Additionally, a photojournalist, whose identity remained unknown, was injured while covering the protest after being hit by a tear-gas canister.

Those injured were later evacuated to nearby hospitals in Nablus City.