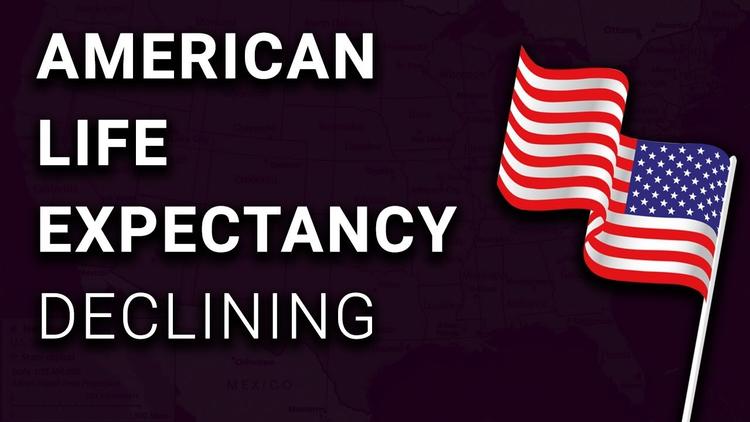 Ann Arbor (Informed Comment) – The US has fallen off a cliff on global health statistics, plummeting an unprecedented 21 places in the world index. Moreover, the US is expected to fall even further behind over the next 20 years. Mellan Solly at The Smithsonian Magazine analyzed the numbers in a just-published Lancet article

While most countries are projected to experience a stark increase in lifespan, as much as 4 years, over the next two decades, the US will improve only slightly, plunging into a profound stagnation healthwise.

The US has switched places in the world rankings with China. You have to look closely at the Lancet Map to tell, but the US is very light blue like Brazil in 2040, and all of Europe, Canada, Australia, Japan, Singapore, China, and some of the Middle East (Saudi Arabia up to the Levant) will have healthier and longer-lived populations than the US in 2040. In Spain and Japan people will have a life expectancy of 85. That of the US will be several years shorter. 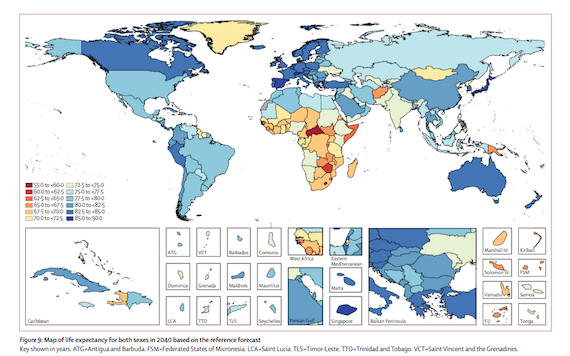 So the obvious question is what is causing this backwardness in US health prospects.

One big cause of going to an early grave is smoking tobacco. The US still lets tobacco companies spray extra nicotine on tobacco leaves so as to make them extra addicting. Since smoking will kill you, the people who try to hook youngsters on smoking are going to the very deepest and most painful level of hell. About 15.5 percent of Americans still smoke, about 38 million people, and all of them are at risk for heart and lung disease, hypertension, and lung cancer.

Tobacco is being promoted in the United States today because we don’t just have a capitalist system but have Barracuda Capitalism. Former speaker of the House John Boehner used actually to give out cash from Big Tobacco on the floor of the House of Representatives, and this was perfectly legal! The legal system has decided that as long as the cigarette sellers put those little warnings on the packet, you can’t sue them for killing people. The tobacco billionaires, none of whom smoke, are being coddled and allowed to create a public health crisis, just because it is lucrative to a small circle of executives.

I can’t go into all the other ways consumer capitalism is shortening our lives, but believe me, it is. Air pollution, mercury pollution from burning coal, radioactive waste, killing off insects with pesticides, and heat-trapping gases threatening our future– all of these have been unleashed by Trump.

Another reason we aren’t going to live longer as a nation is that we are getting fat! A high body mass index is correlated with all kinds of health problems, including heart attacks. 1 in 4 Americans get enough exercise. 1 in 10 eats enough fruits and vegetables.

Our billionaire class is fighting tooth and nail against medicare for all, some version of which most Europeans have. People can’t afford a doctor’s visit to get advice on weight, diet and exercise. Some states have global south levels of death in childbirth because working class mothers can’t afford doctor visits while pregnant. The US barracuda capitalists poisoned Flint’s water to save a few bucks.

As well, our poor diet and sedentary existence (75% of us!) are connected to things like capitalist television. The bandwidth for television is still limited, but the US government just gave that bandwidth away to a handful of media giants, who take the profit of advertising on the people’s airwaves.

Watching hours and hours of television instead of exercising will kill you dead, and, worse, the advertisements on television will encourage you to keep eating unhealthy food all day– food high in fat and salt and carbohydrates. Those activities will also make you depressed. The US media system, which is increasingly being exploited by far right fascist billionaires like Rupert Murdoch, is devastating the bodily and mental health of the American population. (It also gave us the Trump administration, which is a public health nightmare of cosmic proportions).

The US is becoming a more and more unequal society, with wealth concentrated at the top. Wealth transfer schemes like the mortgage bust of 2008-9 moved trillions from the middle class to the super-wealthy. People who lost their jobs and/or homes in the last crash turned to drugs. Initially it was meth. It is an unpleasant drug. It will make you skinny, give you sores, and make your teeth fall out. But for the most part it won’t kill you. The government with its eternal ‘war on drugs’ decided to crack down on meth. People were using sudafed over the counter to produce it, and it was restricted.

Then the devastated sections of the middle classes whom the grasping Bear Stearns and others had ruined with their unwise unsecured loans, turned to opioids. Bush’s wars have made these drugs more accessible for Americans, with poppy production spiking in chaotic Afghanistan.

But it is hard to gauge doses with opioids and very easy to overdose. And die.

American barracuda capitalism isn’t providing a living wage to large numbers of workers. The average wage of the average worker has been largely stagnant since 1970. Our peculiar system is, however, making a few people like Jeff Bezos fabulously wealthy. The three wealthiest billionaires own more than the poorer half of the country.