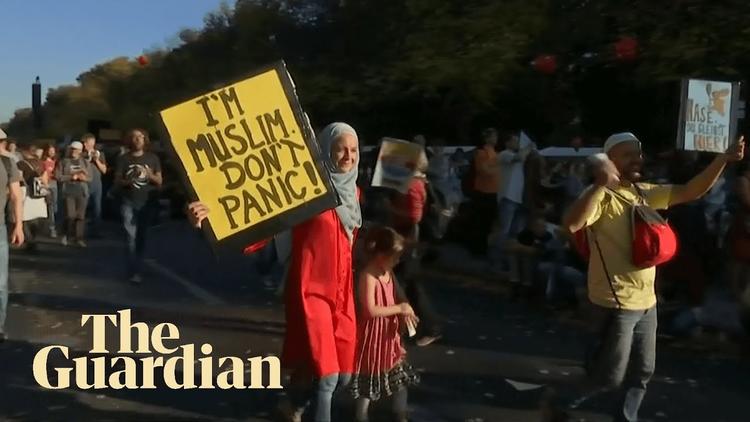 BERLIN, GERMANY: Protesters participate in the Unteilbar (‘indivisible’) march against racism, exclusion and exploitation and for an open society on October 13, 2018 in Berlin, Germany. Organizers of the march decry the growing divisions in European society that they claim are being fuelled by policies that accentuate the gap between rich and poor, that prioritize security over human rights and that promote nationalism over inclusion.

Hundreds of thousands of people marched Saturday afternoon demonstrating against racism and calling for solidarity against the rise of the far-right across Germany and Europe.

On a hot and sunny fall day a 3-mile stretch of Berlin city’s center, from Alexanderplatz through the Brandenburg Gate to the Victory Column, was closed to accommodate the huge parade, which was united under the hashtag #unteilbar (“indivisible”).

A wide range of groups backed the “Indivisible” protest in the heart of the German capital under the slogan “For an Open and Free Society: Solidarity, not Exclusion!”

Here is the “Call to Action” that organizers issued last week:

For an Open and Free Society: Solidarity, not Exclusion!

A dramatic political shift is taking place: racism and discrimination are becoming socially acceptable. What yesterday was considered unthinkable and unutterable, has today become a reality. Humanity and human rights, religious freedom, and the rule of law are being openly attacked. This is an attack on all of us.

We will not allow the welfare state to be played off against asylum and migration. We will stand in resistance when fundamental rights and freedoms are in danger of being further restricted.

We are expected to accept the deaths of those seeking refuge in Europe as ‘normal’. Europe is in a grip of an atmosphere of nationalistic antagonism and exclusion. However, any criticism of these inhumane conditions is dismissed as unrealistic.

While the State tightens its ‘so-called’ security laws and extends surveillance in a show of strength, the social system is increasingly characterised by weakness: millions suffer the impact of an underinvestment in basic care, healthcare, childcare, and education. Since ‘Agenda 2010’, the redistribution of wealth from below to above has advanced at an alarming rate. The billions in profit generated through tax incentives stand in stark contrast to one of the biggest low-wage sectors sectors in Europe and level of impoverished, disadvantaged people.

We are against this – we will resist!

We stand for an open and caring society, in which human rights are indivisible and in which diverse and self-determined ways of life, are undeniably respected.

We stand against all forms of hatred and discrimination. Together, we decidedly confront anti-Muslim racism, antisemitism, antiziganism, antifeminism and LGBTIQ-phobia.

There are already many of us.

Whether it’s on Europe’s external borders, or here within refugee organisations and in welcome initiatives; in queer-feminist and antiracist movements, migrant organisations, trade unions, associations, NGO’s, religious communities, societies and neighbourhoods; whether it’s through the fight against homelessness, displacement, or lack of care services, against surveillance and tightened security laws, or the stripping of rights from refugees — in many places, people are actively defending themselves and others against discrimination, criminalisation and exclusion.

Together, we will make this caring society visible. On 13 October, a clear signal will be sent from Berlin.

#unteilbar
For an Open and Free Society: Solidarity, not Exclusion!
Demonstration: 13 October 2018 – 13:00 Berlin

For a Europe of human rights and social justice!
For a solidarity-based society rather than exclusion and racism!
For the right to protection and asylum – against the isolation of Europe!
For a free and diverse society!
Solidarity knows no borders!