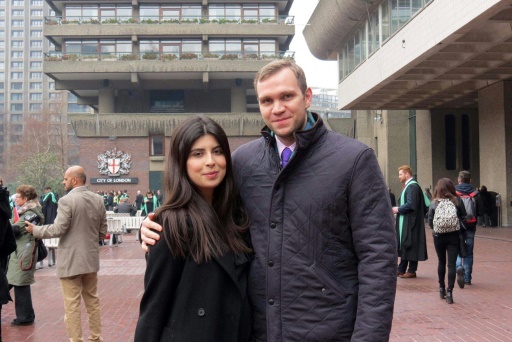 Abu Dhabi (AFP) – The United Arab Emirates on Monday pardoned British academic Matthew Hedges just days after sentencing him to life in prison for spying in a case that stunned Britain and his family.

The UK thanked its Gulf ally and Hedges’s wife expressed her joy after he was among more than 700 prisoners pardoned by UAE President Sheikh Khalifa bin Zayed Al-Nahyan for next month’s National Day.

“Mr. Hedges will be permitted to leave the UAE once formalities are completed,” Jaber al-Lamki, a government media official, said in a statement.

The UAE showed footage at a news conference in the capital Abu Dhabi in which Hedges purportedly confessed to being an MI6 foreign intelligence agent.

“Fantastic news about Matthew Hedges. Although we didn’t agree with charges we are grateful to UAE govt for resolving issue speedily,” Hunt said on Twitter.

Hedges’s wife Daniela Tejada, who last saw him on the day he was sentenced, said in a statement: “The presidential pardon for Matt is the best news we could have received. Our six plus months of nightmare are finally over and to say we are elated is an understatement.”

Asked by BBC radio about the UAE’s repeated accusation that Hedges was a spy, Colombia-born Tejada said: “In my heart, I know that he isn’t”.

But she added: “If that’s what it takes for him to be back, I welcome the news”.

Hunt said on BBC radio of the spying charges: “We have never seen any evidence that they are true”.

Hunt said he expected Hedges to be released “very soon indeed”, adding that it was a “bittersweet moment” because of other Britons detained unjustly around the world.

Hedges, a 31-year-old researcher at Durham University, was detained in Dubai while researching the UAE’s foreign and internal security policies after the Arab Spring revolutions of 2011.

He was sentenced to life in jail by a court in Abu Dhabi last week after he was convicted of spying for a foreign country.

Lamki said that Hedges was “a 100-percent secret service agent and was convicted of espionage.”

He said Hedges confessed to gathering information about the UAE ruling family, military and its involvement in the Yemen war.

“He confirmed he collected sensitive and classified information about the UAE,” he said, calling the evidence “irrefutable”.

Hedges’s role was “to gather classified information about the UAE military capabilities … and sensitive information on UAE key government figures including members of the UAE ruling families,” he said.

Hedges was arrested on May 5 at Dubai airport.

Lamki said a lawyer had been appointed to defend Hedges who was also allowed to speak to his family repeatedly during his detention.

The presidential pardon came in response to a letter by Hedges’s family delivered by a British official, he said.

“It was always a UAE hope that this matter would be resolved through the common channels of our longstanding partnership. This was a straightforward matter that became unnecessarily complex despite the UAE’s best efforts,” he said in a statement.