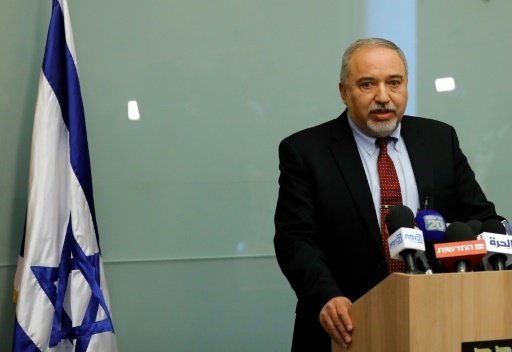 Jerusalem (AFP) – Israeli Defence Minister Avigdor Lieberman announced his resignation on Wednesday and called for early elections after a sharp disagreement over a Gaza ceasefire deal, throwing the government into turmoil.

Lieberman also said his party was quitting Prime Minister Benjamin Netanyahu’s coalition, leaving the premier with only a one-seat majority in parliament.

Elections are not due until November 2019, but Lieberman’s resignation increases the likelihood of an earlier vote.

“What happened yesterday — the truce combined with the process with Hamas — is capitulating to terror,” Lieberman told journalists in explaining his reasons for resigning.

“What we’re doing now as a state is buying short-term quiet, with the price being severe long-term damage to national security.” 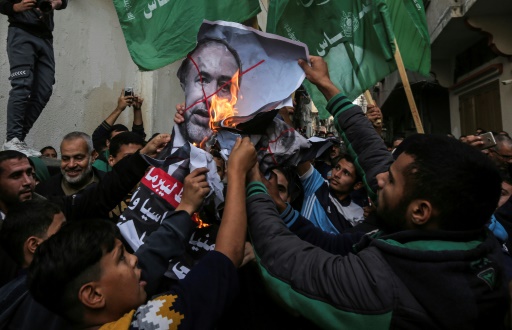 He added later: “We should agree on a date for elections as early as possible.”

Netanyahu has defended Tuesday’s ceasefire deal that ended the worst escalation between Israel and Palestinian militants in Gaza since a 2014 war.

An official from Netanyahu’s Likud party hit back at speculation that early elections would be called and said the prime minister would take charge of Lieberman’s portfolio at least temporarily.

“There’s no obligation to go to an election in this time of security sensitivity,” the official said on condition of anonymity.

A Likud spokesman said later that Netanyahu had begun consultations with heads of parties in his coalition to stabilise it and that these would continue Thursday.

But he said in a statement that Lieberman had yet to submit his resignation letter.

The party of far-right Education Minister Naftali Bennett, a Netanyahu rival, was threatening to withdraw from the coalition if he was not given the defence portfolio.

Lieberman, a security hardliner, heads the right-wing Yisrael Beitenu party, which holds five seats in the 120-seat parliament, the Knesset. 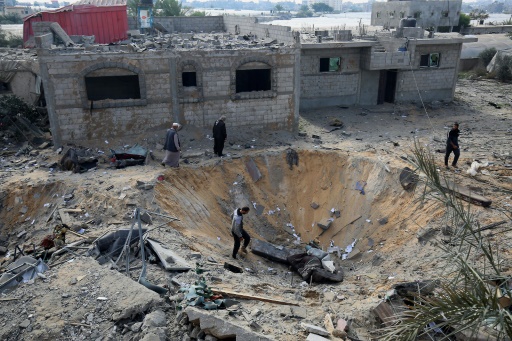 AFP / SAID KHATIB. Palestinians inspect a crater on November 14, 2018 caused by an Israeli airstrike in Rafah in the southern Gaza Strip.

Before taking over as defence minister, he said he would give Hamas leader Ismail Haniya 48 hours to hand over two detained Israeli civilians and the bodies of soldiers killed in the 2014 war “or you’re dead”.

He later backed off and said he was committed to “responsible, reasonable policy”.

The ceasefire held on Wednesday, but Netanyahu was seeking to combat criticism of the decision.

Beyond Lieberman’s resignation, several hundred Israelis living near the border with Gaza staged a protest to call for further action against its Islamist rulers Hamas.

Netanyahu defended his strategy and said: “Our enemies begged for a ceasefire.

“In times of emergency, when making decisions crucial to security, the public can’t always be privy to the considerations that must be hidden from the enemy,” he said at a ceremony on Wednesday.

Hamas portrayed the ceasefire as a victory and thousands of residents of the blockaded enclave took to the streets late Tuesday to celebrate. 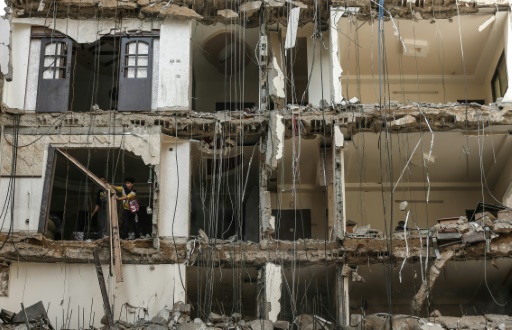 AFP / MAHMUD HAMS. Palestinians clear rubble on November 14, 2018 in a building damaged by an Israeli air strike in the Gaza Strip.

On Wednesday, Gazan demonstrators burned pictures of Lieberman and sweets were handed out in the streets, while Hamas called his resignation a “victory.”

The Egyptian-brokered truce was announced by Gaza militant groups, including Hamas, on Tuesday.

A diplomatic source familiar with the agreement said it involved returning to arrangements put in place following the 2014 war, but warned: “The situation remains very precarious and can blow up again.

“What we have seen in the past 48 hours was very dangerous and no efforts should be spared to avoid similar flare-ups.”

The violence saw seven Gazans killed in 24 hours as Israeli strikes targeted militants and flattened buildings, sending fireballs and plumes of smoke into the sky. 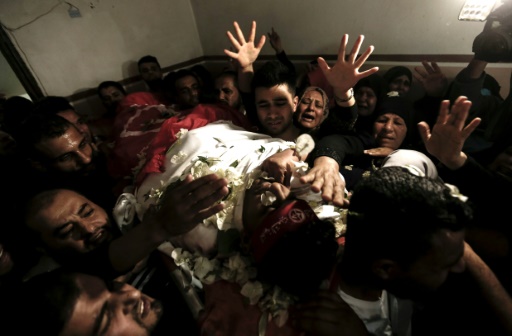 AFP / Mahmud Hams. Seven Gazans were killed in 24 hours as Israeli strikes targeted militants and flattened buildings, and the territory’s Islamist rulers Hamas hailed the ceaefire as a victory.

Around 460 rockets and mortar rounds were fired at Israel, the most ever in such a brief time period, the army said.

An anti-tank missile hit a bus near the Gaza border that Hamas says was being used by Israel’s army. An Israeli soldier was severely wounded.

In all, some 27 Israelis were wounded, three of them severely.

A Palestinian labourer from the occupied West Bank was killed when a rocket hit a building in the Israeli city of Ashkelon.

The violence had erupted on Sunday with a botched Israeli special forces operation inside the Gaza Strip that turned deadly and prompted Hamas to vow revenge.

The clash that resulted from the blown operation killed seven Palestinian militants, including a local Hamas military commander, as well as an Israeli army officer.

This week’s escalation came despite Netanyahu’s decision to allow Qatar to transfer millions of dollars in aid to Gaza for salaries as well as fuel to ease a chronic electricity shortage.

The agreements had led to calmer protests along the border after months of deadly unrest.

But those cash transfers also drew criticism from Netanyahu’s own government, and Lieberman slammed them in announcing his resignation.

AFP / Menahem KAHANA. Defence Minister Avigdor Lieberman plunges the Israeli government into turmoil by announcing he is resigning over a ceasefire deal with Palestinian militants in Gaza that he describes as “capitulating to terror”.