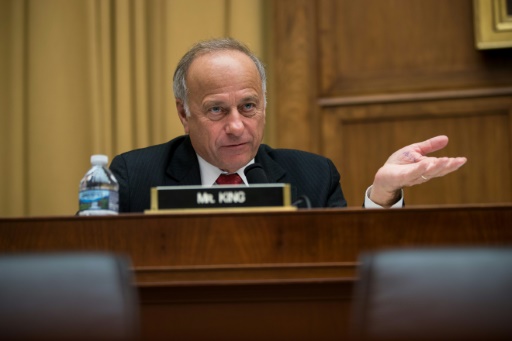 Washington (AFP) – Far-right US congressman Steve King came under growing political pressure Wednesday from his own Republican Party, after it took the rare step of publicly rebuking him over recent comments supporting white nationalism.

“We must stand up against white supremacy and hate in all forms, and I strongly condemn this behavior.”

It was an extraordinary castigation of an unabashed defender of white culture, and an ally of President Donald Trump, by party leadership days after 11 people were killed in an anti-Semitic attack on a Pittsburgh synagogue.

Trump has been struggling to fend off accusations that his bitter anti-immigrant rhetoric helped create the conditions for the massacre, by emboldening the country’s white nationalist fringe.

The condemnation of King also came in the final stretch of campaigning for the November 6 midterm elections, with Republicans fighting a rising Democratic tide that seeks to reclaim the majority in the House of Representatives.

Eight-term lawmaker King, 69, faces his toughest re-election in years, with a Democratic rival closing the poll gap and reportedly outraising him in campaign funding.

Several statements and actions in recent months by King have drawn attention.

Two weeks ago he endorsed a candidate for Toronto mayor, Faith Goldy, an apparent “white genocide” conspiracy theorist who has appeared on a neo-Nazi podcast.

In August King traveled to Europe, where he told a publication aligned with Austria’s far-right party FPO that Jewish philanthropist George Soros has had a dark influence on US elections.

Soros, a frequent target of far-right criticism, was among a dozen Democratic figures and other Trump critics who were sent pipe bombs in the mail last week.

King also said Soros, who escaped Nazi-occupied Hungary as a child, supports the supplanting of Europe’s white Christian majority with minorities — a theory that King and other xenophobes refer to as the “great replacement.”

“What does this diversity bring that we don’t already have?” King told the publication Unzensuriert.

King’s caustic rhetoric is making some Republicans and donors uncomfortable. Prominent agribusinesses Land O’Lakes and Purina on Tuesday announced they would no longer support his campaign.

“After years of embarrassing Iowans with his white nationalist rhetoric… King has apparently become a liability to national Republicans and some of the businesses that have backed him financially,” the Des Moines Register, Iowa’s main newspaper, said in a scathing editorial.

King has never hidden his far-right views. In 2013 he caused an uproar when he said some immigrant children had “calves the size of cantaloupes” because they hauled loads of marijuana through the desert.

King pushed back against the criticism, saying on Twitter that the attacks were “orchestrated by nasty, desperate, and dishonest fake news.”

Featured Photo: GETTY IMAGES NORTH AMERICA/AFP / Drew Angerer. US congressman Steve King, a Republican from Iowa, is under fire from his own party for his far-right views that some have described as racist and anti-Semitic.