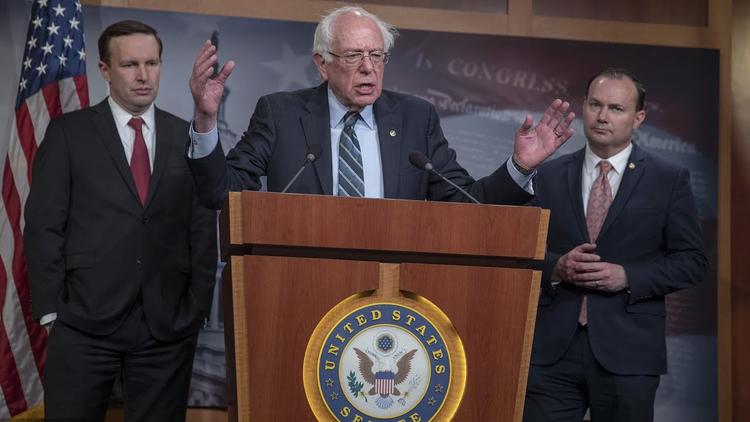 Ann Arbor (Informed Comment) – Seven Republicans joined the Democrats in the Senate in voting for resolutions that 1) assigned the blame for the murder of the dissident Saudi journalist and Washington Post columnist Jamal Khashoggi to Saudi crown prince Mohammed Bin Salman and 2) invoked the War Powers Act of 1973 in calling for an end to US military involvement in the Saudi-led war on Yemen.

Neither house of the US Congress is typically very eager to get involved in foreign policy, which congressional representatives and senators typically leave to the president. (The Senate Select Committee on Foreign Affairs and the House counterpart are exceptions, but their deliberations seldom go to the whole Congress). How deep our current political crisis is under the beleaguered Trump presidency can be estimated by the mere fact that the Senate invoked the War Powers Resolution for the first time since it was enacted under Nixon in 1973.

First, Joint Resolution 69 asked for a diplomatic solution to the Yemen war, given that “nearly 12,000,000 people are suffering from “severe hunger,” according to the United Nations’ World Food Programme.”

The Senators let Riyadh have it over the erratic and outrageous behavior of crown prince Mohammed Bin Salman:

… the Government of the Kingdom of Saudi Arabia has, in recent years, engaged in concerning behavior, including its conduct in the civil war in Yemen, apparent detention of the Prime Minister of Lebanon, undermining the unity of the Gulf Cooperation Council, expulsion of the Canadian ambassador, suppression of dissent within the Kingdom, and the murder of Jamal Khashoggi.”

The Senate therefore said that it

(2) acknowledges the United States Government has sanctioned 17 Saudi individuals under the Global Magnitsky Human Rights Accountability Act (subtitle F of title XII of Public Law 114–328; 22 U.S.C. 2656 note) for their roles in the murder;

In other words, King Salman should have his own son, Mohammed Bin Salman, arrested and tried for the murder of Jamal Khashoggi!

“warns that the Government of the Kingdom of Saudi Arabia’s increasing purchases of military equipment from, and cooperation with, the Russian Federation and the People’s Republic of China, challenges the strength and integrity of the long-standing military-to-military relationship between the United States and the Kingdom of Saudi Arabia and may introduce significant national security and economic risks to both parties.”

They go on to demand an end to the Yemen war, though they are careful to place some blame on Iran and the Houthi rebels.

These passages make for an absolutely astonishing and unprecedented document! They have played Perry Mason and convicted the crown prince of Saudi Arabia, Mohammed Bin Salman, of premeditated murder! He is the de facto ruler of the country, but he has been effectively barred from addressing Congress, and any state trip he makes to Washington, DC, will be awkward for years to come.

With regard to getting the US military out of Yemen, the Senators passed a separate measure:

Just so Trump and his Secretary of Defense, James Mattis, get the message right off the bat, the resolution is entitled “To direct the removal of United States Armed Forces from hostilities in the Republic of Yemen that have not been authorized by Congress.”

The Senators point out that under article I, section 8, clause 11 of the United States Constitution, the Congress has the sole power to declare war, and go on to point out rather testily that Congress has not declared war on Yemen nor was it ever consulted about the US entering the fray against the Houthis or Helpers of God in the Republic of Yemen.

Nevertheless, the Senators say, since March of 2015, the US armed forces have been “providing to the Saudi-led coalition aerial targeting assistance, intelligence sharing, and mid-flight aerial refueling, and established a Joint Combined Planning Cell with Saudi Arabia, “in which members of the United States Armed Forces assist in aerial targeting and help to coordinate military and intelligence activities.”

They seem to take a certain amount of satisfaction in quoting Secretary Mattis against himself, noting that he has said publicly, “We have gone in to be very—to be helpful where we can in identifying how you do target analysis and how you make certain you hit the right thing.” That is, if the Senate’s argument is that it needs to be the initiator of this sort of activity, Mattis is admitting he is pursuing unauthorized military action.

Then the senators up their game, insisting that the war in Yemen is in fact a war, and therefore falls under the authority of section 4(a) of the War Powers Resolution (50 U.S.C. 1543(a), which says that any time the US is engaged in military action beyond US borders without congressional authorization, “such forces shall be removed by the President if the Congress so directs.” The senators recognize that US ground forces are not engaged in conventional troop movements in Yemen, but note that the War Powers Resolution also covers “the assignment of members of such armed forces to command, coordinate, participate in the movement of, or accompany the regular or irregular military forces of any foreign country or government…”

The Senate concludes that “activities that the United States is conducting in support of the Saudi-led coalition, including aerial refueling and targeting assistance, fall within this definition..”

The invocation of the War Powers Resolution with regard to support for the irregular or irregular forces of a foreign country is pure genius, and now that it has been done once, it surely will be done again.

[N]o specific statutory authorization for the use of United States Armed Forces with respect to the conflict between the Saudi-led coalition and the Houthis in Yemen has been enacted, and no provision of law explicitly authorizes the provision of targeting assistance or of midair refueling services to warplanes of Saudi Arabia or the United Arab Emirates that are engaged in such conflict.

They also demand from Trump a report on the likely risks of ceasing US support of Saudi military action in Yemen. This provision is likely intended as a way for Democrats from red districts and for Republicans who favored the resolution to cover their behinds with their constituents.

Thursday was a historic day, and these bipartisan resolutions will go down in history for their moral clarity and jealous guarding of constitutional prerogatives, as well as for their remarkably frank designation of a de facto head of state with whom the US is allied as a murderer.

Sen. Bernie Sanders’ fingerprints are all over these documents (he wrote the one on withdrawing from Yemen), but support for them was broader than for most pieces of legislation in recent years.

The resolutions do not have the force of law as yet, and the House won’t even take them up until January, when the Dems will be weaker in the Senate. Trump will veto them and it isn’t clear there is enough opposition to overrule his veto.

Still, maybe, despite their symbolic character, these resolutions are a turning point for the Yemen War, and for US diplomacy in general.