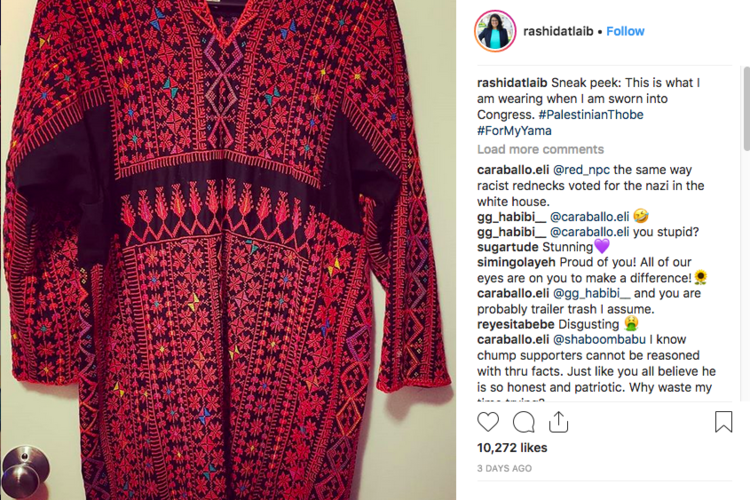 Rashida Tlaib, the Palestinian-American congresswoman-elect, said she will wear a traditional Palestinian gown for her swearing-in ceremony in the United States House of Representatives next month.

This move by Tlaib can be seen as a way to make visible a community in the U.S. Congress which has been made invisible due to Israel’s excessive influence on the country’s politics.

The Democratic representative for Michigan, who made history in November for being the first Muslim woman to be elected to the House of Representative, is outspoken about her support for Palestine. 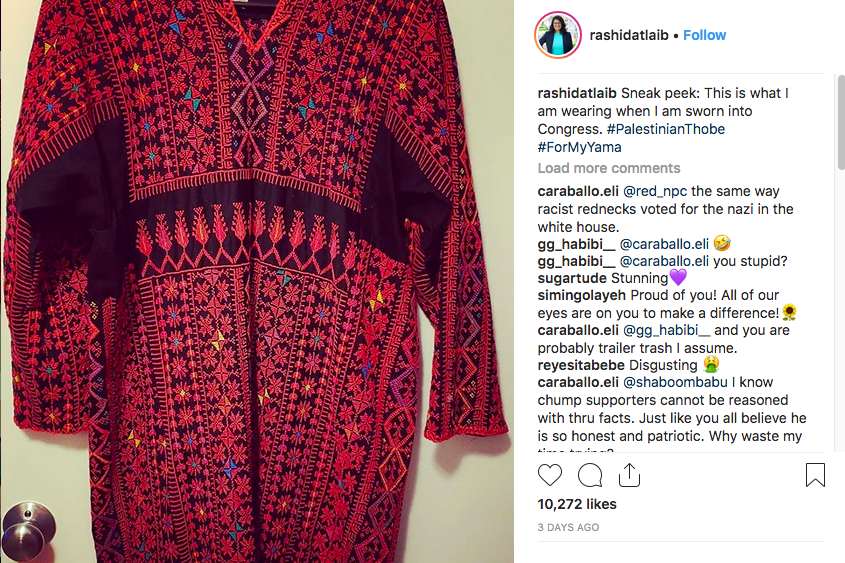 “Sneak peek: This is what I am wearing when I am sworn into Congress. #PalestinianThobe #ForMyYama,” Tlaib wrote on her Instagram Friday.

Palestinian traditional gowns have different embroidery for different regions. Tlaib’s mother is from Beit Ur al-Fauqa, outside Ramallah, and her father belongs from Beit Hanina in East Jerusalem.

The attire is a significant symbol of centuries of Palestinian tradition and history as it used to be commonly used by women decades before the foundation of Israel in 1948. Therefore it has a significant historical value that reaffirms the existence and resilience of the Palestinian identity and nation.

It was reported earlier in December that she is planning to lead a congressional delegation to Occupied West Bank, Palestine in order to present an alternative perspective on the conflict.

Tlaib’s trip will show the reality of the Israeli occupation, humanizing Palestinians, and focusing on “Israel’s detention of Palestinian children, education, access to clean water, and poverty,” she said.

By wearing her traditional dress, Tlaib will follow the footsteps of Ruth Buffalo, the first Native American Democratic elected to serve in North Dakota’s state legislature. Buffalo wore a traditional Native American dress as a tribute to her ancestry for her swearing-in ceremony earlier this month.

The U.S. mid-term elections have seen a wave of firsts when Muslim women, Native American women, a large number of LGBT candidates, and progressive women candidates were elected by the people as their representatives.

Most of these elected women are from persecuted communities which mainstream history and politics tend to exclude from public memory. But these women are determined to refresh the public memory and one way of doing that is to be sworn-in in one of the most powerful Congresses of the world, donning traditional attires.

The Intercept: “The Truth About Israel, Boycotts, and BDS”