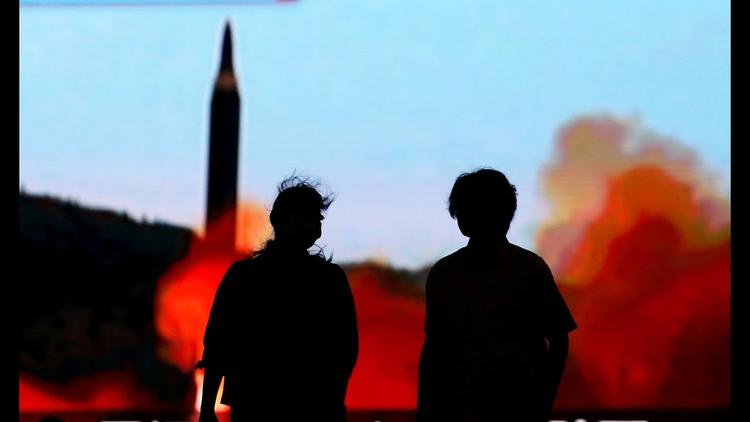 Ann Arbor (Informed Comment) – Our great leader has delivered himself of some weighty pronouncements about Iran, about which he knows not a single little thing, likely even where exactly it is. He called the US intelligence agencies “passive and naive” on Iran, said that Tehran had become less active since Trump violated the 2015 nuclear deal, said Iran’s economy is crashing, and urged Director of National Intelligence Dan Coats and CIA director Gina Haspel to “go back to school.”

The Intelligence people seem to be extremely passive and naive when it comes to the dangers of Iran. They are wrong! When I became President Iran was making trouble all over the Middle East, and beyond. Since ending the terrible Iran Nuclear Deal, they are MUCH different, but….

….a source of potential danger and conflict. They are testing Rockets (last week) and more, and are coming very close to the edge. There economy is now crashing, which is the only thing holding them back. Be careful of Iran. Perhaps Intelligence should go back to school!

In contrast, Yukiya Amano, the head of the UN’s International Atomic Energy Agency, affirmed Wednesday that Iran continues to comply with its obligations under the 2015 Joint Comprehensive Plan of Action (JCPOA) or Nuclear Deal. He wrote,

“We continue to verify and monitor the implementation by Iran of its nuclear-related commitments under the Joint Comprehensive Plan of Action.

Iran is implementing its nuclear-related commitments under the JCPOA. As I have said many times, it is essential that Iran continues to fully implement those commitments.”

These remarks, posted at the IAEA site, point to the same conclusion as the just-released worldwide threat assessment released by Director of National Security Dan Coats, in preparation for his congressional testimony this week.

“Iran: We continue to assess that Iran is not currently undertaking the key nuclear weapons-development activities we judge necessary to produce a nuclear device. However, Iranian officials have publicly threatened to reverse some of Iran’s Joint Comprehensive Plan of Action (JCPOA) commitments and resume nuclear activities that the JCPOA limits—if Iran does not gain the tangible trade and investment benefits it expected from the deal.”

What Coats doesn’t say is that Iranian officials’ warnings that they could renege on elements of the 2015 nuclear deal only came after Trump violated the treaty and launched extremely severe economic sanctions against Iran, to the extent of twisting the arms of Iran’s oil customers to stop buying from Tehran.

It is thus actually dishonest for Coats to say that Iran has threatened to pull out of the JCPOA or some part of it if “Iran does not gain the tangible trade and investment benefits” they hoped to gain from the deal.”

The fact is that Iran gave up 80% of its civilian nuclear program aimed at producing electricity and sacrificed most of the elements of the program that could have allowed it a “Japan option” or a credible threat of being able to construct a nuclear bomb on short notice. Iran gave all this up to receive sanctions relief.

And then Trump screwed them over, even though Tehran adhered to its JCPOA obligations, and slapped severe sanctions back on. Moreover, Trump has brought in war-crazed maniacs like John Bolton to menace Iran with some sort of military action.

So if Iran sticks with the nuclear deal, it will be solely in hopes of getting a new and better relationship with Europe. Otherwise, it is hard to see how anyone could blame Tehran for refusing to be taken for a ride by the Americans and just reverting to the 2014 status quo ante.

As for Trump’s typical hyperactive tweets, they are full of contradictions. He said that his mere reneging on the 2015 nuclear deal had made Iran less active in the Middle East. Wouldn’t that mean that Iran is in fact less of a threat now?

It isn’t in fact the case that Iran has retrenched from Iraq or Syria, but that has nothing to do with the 2015 nuclear deal anyway, since those Iranian entanglements were not part of the negotiations. And anyway at the time the US was secretly pleased to have a de facto Iranian ally in the fight against ISIL (which is extremely anti-Shiite, while Iran is mostly Shiites).

As for Iran’s ballistic missile tests, which don’t seem very successful, they aren’t covered by the nuclear deal. Moreover, Iran has nothing to put in their noses but dumb bombs.

Anyone who thinks the US intelligence agencies are passive or unconcerned about Iran hasn’t been following the issue.

But contrary to the stuff and nonsense with which Bolton is filling Trump’s head at the behest of far right wing Likudnik Sheldon Adelson, there simply is no evidence of Iran seeking a nuclear weapon. Under the terms of the JCPOA, moreover, there is no way it can build one, since it is being inspected (plutonium signatures are virtually impossible to hide).

Trump says he wants out of Syria and Afghanistan, and it seems clear that getting out of the Middle East is popular with his base, who feel too much blood and gold have been spent on that part of the world with no benefit– and indeed with a real deficit.

What I can’t understand is, if Trump thinks he’ll be popular if he brings the troops home from the Middle East, why in the world would he want to rattle sabers at Iran, one of the more populous countries in the region with a disciplined and dedicated national guard in the form of the Iranian Revolutionary Guards Corps?

It is just cuckoo for Cocoa Puffs, just like everything that comes out of Trump’s mouth.