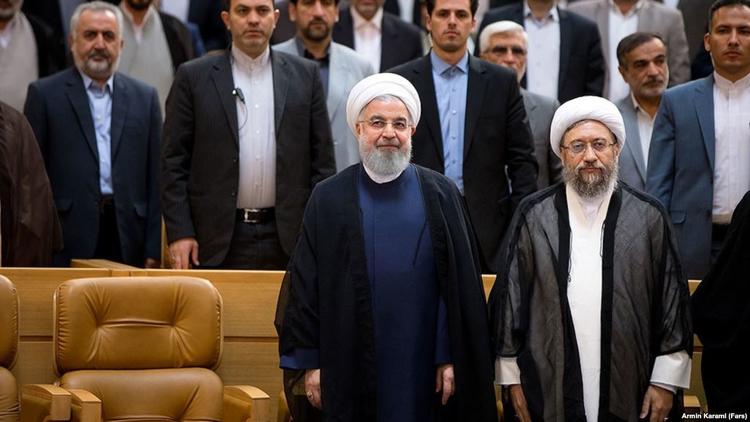 ( RFE/RL) – By appointing a conservative ally to head the influential Expediency Council, Iranian Supreme Leader Ayatollah Ali Khamenei appears to have made a move to strengthen the hard-line camp and weaken the moderates — and also may have cleaned up his line of succession.

“This is not good news for the moderates within the establishment,” Paris-based political analyst Taghi Rahmani said of Ayatollah Sadeq Amoli Larijani’s appointment to both head the Expediency Council and take a seat the powerful Guardians Council.

The Expediency Council is tasked with mediating disputes between parliament and the Guardians Council, which determines whether laws are compliant with the Islamic republic’s constitution and also vets election candidates. In addition to taking on his new roles, Larijani will retain his seat as head of the country’s Judiciary.

“It demonstrates that Khamenei prefers the extremists to manage the country’s affairs,” Rahmani said.

Larijani, a close ally of Khamenei who has been blacklisted by Washington for rights violations that took place under his leadership of the Judiciary, is said to have close ties to the country’s military and intelligence bodies. He’s accused by rights activists of overseeing hundreds of executions and using the Judiciary as an instrument of state repression and a tool to silence dissent.

In taking on leadership of the Expediency Council, Larijani replaces Ayatollah Mahmud Hashemi Shahrudi, who died last week at the age of 70 following a long illness.

Khamenei’s decision was announced in a December 30 decree that was issued by Iranian media. It stated that Larijani, 57, would also join the 12-member Guardians Council.

It is common for Iranian political figures to hold multiple state posts.

The decision comes at a challenging time for Iran, which is dealing with the reimposition by the United States of tough economic sanctions, including penalties targeting the country’s oil exports, following U.S. President Donald Trump’s decision in May to withdraw from the 2015 nuclear deal aimed at curbing Iran’s nuclear program.

Prior to Trump’s decision to abandon the deal worked out with other world powers and Iran, the Islamic republic was hit earlier in the year by a wave of antiestablishment protests that spread to more than 80 cities and towns.

Larijani is a critic of second-term President Hassan Rohani, who was a key player in the hammering out of the nuclear deal, which was highly unpopular with the hard-line camp.

“I think primarily Khamenei’s goal is to strengthen Larijani. He’s moving things around while keeping Larijani at the top,” U.K.-based analyst Saeed Barzin said in an interview with RFE/RL’s Radio Farda.

Both Larijani and the 70-year-old Rohani have been touted as potential successors to Khamenei, who underwent prostrate surgery in 2014 amid long-standing rumors that he has prostate cancer.

Barzin suggested that Larijani’s appointment to the Expediency Council could be mean Khamenei is grooming him for succession.

“It could be a move to consolidate Larijani’s position for leadership, [although that] is speculation for now,” Barzin said. “This will hurt Rohani and will weaken his position, and will tie his hands in the future.”

Larijani’s appointment as chairman of the Expediency Council comes amid rumors that hard-line cleric and defeated presidential candidate Ebrahim Raisi is poised to become head of the Judiciary once Larijani’s term ends in the summer of 2019.

Raisi, the custodian and chairman of the Astan Quds Razavi, the organization that runs Iran’s holiest sites, has been also mentioned among Khamenei’s possible successors.

The head of the Judiciary is appointed by Khamenei for five-year terms.

Speaking on December 22, Prosecutor-General Mohammad-Jafar Montazeri did not confirm or deny the rumors about Raisi taking over the Judiciary, saying only that “for now, it’s in cyberspace.”

Rahmani says Khamenei, 79, appears to be shaping “the succession core.”

“He seems to be creating a circle between the commanders of the Islamic Revolutionary Guards Corps (IRGC) along with Raisi and Larijani and even [one of Khameni’s sons] Mojtaba Khamenei to be in charge of the country’s future leadership team and in control of the country,” Rahmani told RFE/RL.

However, Rahmani noted that the moves does not mean that everything will go according to Khamenei’s plans.

“Setting up the chess pieces does not necessarily means that Khamenei will achieve his wishes,” the analyst said. “Iran’s political conditions and civil society…can influence things, and other players who have remained silent could also play a role in the future.”