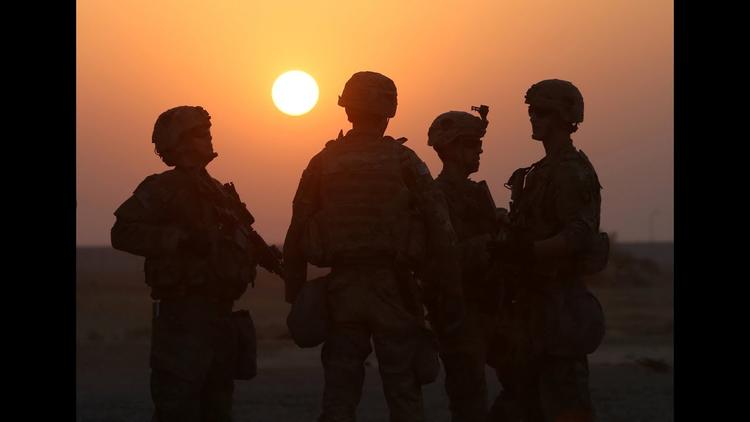 Beirut (al-Akhbar) – Iraq’s supreme Shiite religious authority, Ayatollah Ali al-Sistani, issued a sharp rebuke to US president Donald Trump during a meeting with the head of the United Nations mission in Iraq, Jeanine Hennis-Plasschaert. Sistani said that “Iraq aspires to have good and balanced relations with all neighboring countries, avoiding interfering in their internal affairs or detracting from their sovereignty and independence,” stressing his “rejection of the use of Iraq as a base to harm any other country,” in a clear response to Trump, who confirmed days ago that “his forces remain in Iraq … to monitor Iran.”

Embed from Getty Images
” 10 December 2018, Iraq, Baghdad: An Iraqi girl flashes a victory sign and holds a poster of an Iranian Shia marja in Iraq Ayatollah Sistani on her way to the so-called Green Zone during a celebrations to mark the first anniversary of Iraq’s victory over the Islamic State (IS) group at a military base in Baghdad’s International Airport. Photo: Ameer Al Mohammedaw/dpa (Photo by Ameer Al Mohammedaw/picture alliance via Getty Images).”

Sistani’s remarkable stance was accompanied by a call for Prime Minister Adel Abdul Mahdi to “apply the law to all citizens and residents, without exception,” stressing the need to “limit weapons to the government and to stand against extrajudicial actions, including assassinations and kidnappings.” He added in his statement that “the government has before it a major challenge, especially in the fight against corruption, and for the improvement of public services, and the alleviation of the suffering of citizens, especially in the province of Basra,” saying that “if the major political blocs do not change their approach to dealing with the issues of the country, there will be no real chance of solving the current crises.”

This call reflects his clear critique of the situation in Iraq in the wake of the end of the battle against Daesh (ISIL)– given the burgeoning crisis in the cost of living and the increase of insecurity, including cases of murder and kidnapping. Some see Sistani’s position, which was described as “vehement in tone,” as a warning of a potential explosion and an attempt to galvanize people to seize what the Shiite religious leadership sees as as the “last chance” for a breakthrough in combating corruption and moving forward with building state institutions.

Turning to another subject, the “Joint Operations Command” denied rumors that Prime Minister Abdul Mahdi had approved the return the Kurdish Peshmerga paramilitary to disputed areas, describing the news as “false” and stressing that Baghdad and Erbil had agreed to establish “joint coordination centers” in those areas.

Translation of an Arabic article in al-Akhbar published under a Creative Commons License.