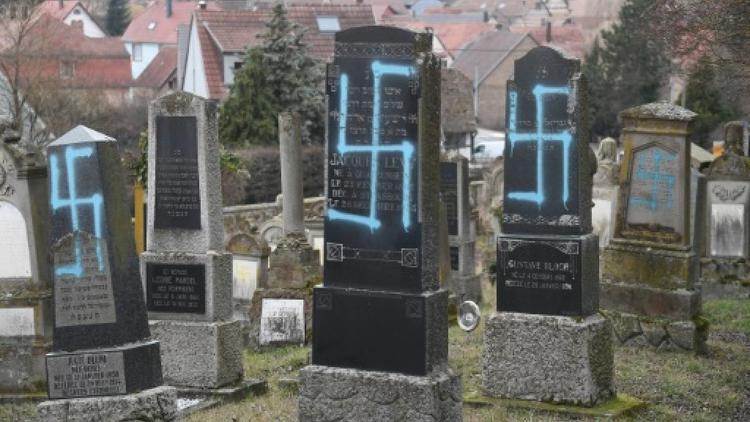 Strasbourg (AFP) – Around 80 graves have been daubed with swastikas at a Jewish cemetery in eastern France, local officials said, hours ahead of nationwide marches on Tuesday against a rise in anti-Semitic attacks.

The damage was discovered on Tuesday morning at a cemetery in the village of Quatzenheim, close to the border with Germany in the Alsace region, a statement from the regional security office said.

Photos show the Nazi symbols in blue spray-painted on the damaged graves, one of which bears the words “Elsassisches Schwarzen Wolfe” (“Black Alsacian Wolves), a separatist group with links to neo-Nazis in the 1970s.

The top security official for the region, Jean-Luc Marx, condemned “in the strongest possible terms this awful anti-Semitic act and sends his complete support to the Jewish community which has been targeted again,” the statement added.

Rallies are planned in Paris and other French cities Tuesday to denounce a flare-up of anti-Semitic vandalism in recent weeks, often coinciding with “yellow vest” anti-government protests.

Politicians on both the right and left have urged a massive participation after a prominent French writer was the target of a violent tirade by a protester in Paris on Saturday.

A video of the scene showed the protester calling the philosopher Alain Finkielkraut a “dirty Zionist” and telling him that “France belongs to us.”

Last year, French police recorded a 74 percent surge in reported anti-Jewish offences, causing alarm in a country that is home to the biggest Jewish population in Europe.

“I don’t know how long we are going to carry on… It makes me feel sick.”

In December nearly 40 graves as well as a monument to Holocaust victims were desecrated at another Jewish cemetery near Strasbourg in Herrlisheim, about a half hour drive from Quatzenheim.

Featured Photo: “Swastikas were discovered on dozens of graves at the Jewish cemetery in Quatzenheim, eastern France, on Tuesday AFP.”