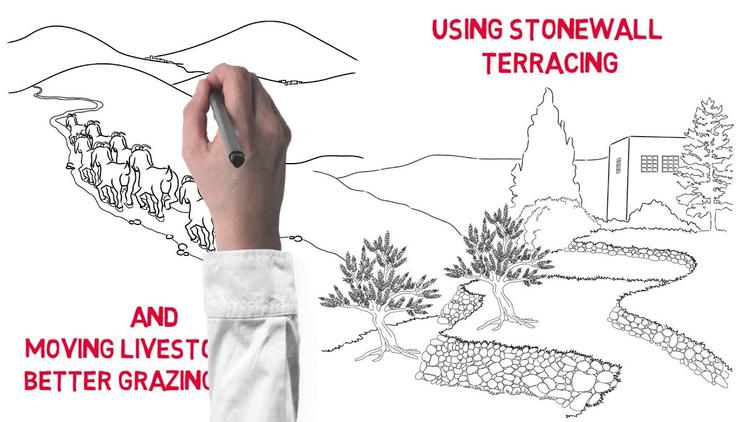 (Al-Shabaka) – Climate change is among the greatest threats currently facing human life. Its effects are global, wide-ranging, and unequally distributed. Despite Palestinians and Israelis inhabiting the same physical terrain, Palestinians under occupation will suffer the effects of climate change more severely.

The single greatest non-environmental risk facing Palestinians in the West Bank remains the ongoing Israeli occupation, an occupation so pervasive that the United Nations Development Program considers it an environmental “risk” in its own right. Now in its 52nd year, the occupation prevents Palestinians from accessing and managing their land and resources, particularly water. Significantly, it prevents them from pursuing measures to support climate change adaptation, which is the adjustment of human or natural systems in response to the effects of climate change. In the West Bank, the Palestinian Authority’s (PA) inability to pursue adaptation policies is a direct consequence of the occupation and will have acute human and environmental repercussions for Palestinian inhabitants.

Palestine-Israel is located in one of the world’s most water-scarce regions. Climate change is expected to result in decreased rainfall and rising temperatures. This puts the water and agriculture sectors at serious risk, particularly in the Occupied Palestinian Territory (OPT), which has some of the world’s lowest per capita water availability. Palestinians’ main source of drinking water is stored groundwater (predominantly from aquifers), while approximately half of the water extracted from these groundwater wells is used for agriculture.

Israel has engineered a complicated bureaucratic system designed to control and curtail Palestinians’ access to groundwater under the cover of enforcing the terms of the 1995 Oslo II Interim Accord, which temporarily allocated water resources to the Israeli government and the PA. Oslo II granted Israel control over approximately 80% of water reserves in the West Bank for an initial five-year period. The agreement, which is in effect to this day, therefore did not account for long-term changes in water distribution or population growth.

The Joint Water Committee (JWC), an organ of the Oslo Accords, prevents Palestinians from making water-related decisions without Israeli approval, impeding their access to the Jordan River and denying them permits to capture runoff water in dams. Israeli policies thereby make it extremely difficult for Palestinians to develop new water access or repair existing infrastructure; this frequently results in the demolition of life-sustaining structures and wells under the pretext that the structures were built without Israel’s permission. At the same time, Israel’s 600,000 illegal settlers use six times more water than the three million Palestinians in the West Bank. Settler violence toward Palestinian infrastructure further imperils fragile water systems.

Most Palestinian water is used for irrigation, making farmers and herders those who will bear the brunt of any further decrease in water availability. Israeli land theft, restrictions on movement, and controlled access to grazing land exacerbate the particular vulnerability of farmers and herders. With over 400 checkpoints and roadblocks in the West Bank, a discriminatory system for the military issuance of mobility permits, expanding settlements and settler-only roads, and the Apartheid Wall, less land is available for Palestinian agriculture and farmers are increasingly unable to tend to the land they do have, threatening their crops and herds. Moreover, most of the West Bank’s natural resources and open spaces, including some of the best agricultural land in the Jordan River Valley, fall in Area C, which comprises over 63% of the West Bank and has been effectively annexed by Israel.

The PA lacks sovereign jurisdiction over more than 60% of West Bank territory and wields no independent political agency in managing climate risks. Poor governance and the political rift between Hamas in Gaza and Fatah in the West Bank escalate the risks to an already-vulnerable Palestinian population.

In particular, the PA is poorly equipped to support long-term adaptation, a challenge that demands external political support, robust inter-ministerial collaboration, and greater fiscal resources than are currently available. For instance, the PA’s Environment Quality Authority developed a “National Climate Change Adaptation Strategy” in 2011 with support from external experts and donors. The plan underlines the need for climate adaptation and cites the estimated cost of water and agriculture adaptation at $1 billion and $369.3 million, respectively – far beyond existing fiscal capacity. It is worth noting that many of the PA’s fiscal woes stem from Israel siphoning Palestinian tax, aid, and trade revenues into its own coffers.

As for international support, Palestine became a party to the UN Framework Convention on Climate Change (UNFCCC) in March 2016 and ratified the Paris Agreement a month later. Palestine’s National Adaptation Plan was submitted to the UNFCCC in November 2016. While these efforts are much needed, they are neither rapid nor comprehensive enough to offset the effects of climate change, made worse by the ever-expanding Israeli occupation.

1. The environmental arrangements of the Oslo II Accords, especially as concern water rights, should be recognized as having expired, and Palestinians should regain full and uncompromising access to aquifers and the Jordan River.

2. The PA and Palestinian civil society organizations should expand an awareness-raising campaign to inform Palestinians of climate risks and suggest coping strategies.

4. Since Palestinian society relies heavily on aid, international donors should finance projects that fully integrate mitigation of climate risks. However, there is much criticism of the aid and NGO architecture in the OPT and incorporating climate vulnerability into this framework is not without ethical concerns.

Zena Agha is Al-Shabaka’s US Policy Fellow. Her areas of expertise include Israeli settlement-building in the occupied Palestinian territory with a special focus on Jerusalem, modern Middle Eastern history, and spatial practices. She has previously worked at the Economist, the Iraqi Embassy in Paris, and the Palestinian delegation at UNESCO. In addition to opinion pieces in The Independent, and The Nation, Zena’s media credits include the BBC World Service, BBC Arabic and El Pais. Zena was awarded the Kennedy Scholarship to study at Harvard University, completing her Master’s in Middle Eastern Studies.

Via Al-Shabaka: The Palestinian Policy Network under a Creative Commons license.