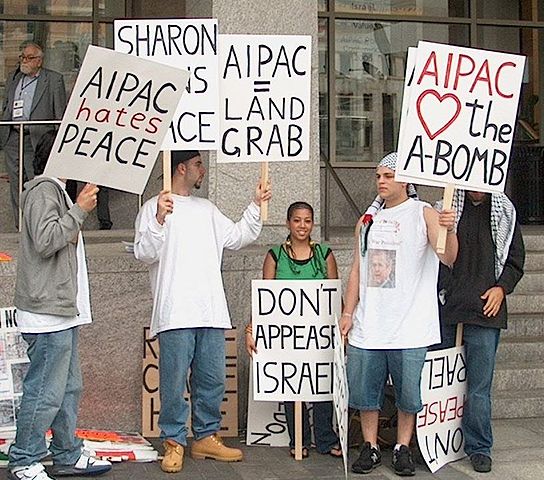 Ann Arbor (Informed Comment) – Bernie Sanders, Elizabeth Warren, Kamala Harris, Pete Buttigieg and Julian Castro, among candidates for the Democratic Party nomination for president, have all announced that they will not attend the annual conference of the American Israel Public Affairs Committee (AIPAC)

The powerful grassroots organization of center-left Democrats, MoveOn.org, has called for a boycott of the annual AIPAC conference.

It is a potential watershed moment. MoveOn.org was founded in 1998 by tech entrepreneurs Joan Blades and Wes Boyd, a husband and wife team behind Berkeley Systems. It came initially out of an email campaign aimed at preventing the impeachment of Bill Clinton, arguing that Congress should censure him and “move on.” The emails went viral, tipping Blades and Boyd to the potential of grassroots internet organizing as opposed to depending on corporate sponsors.

MoveOn.org seems to me to have moved left over time, including on Israel/Palestine. It spearheaded the movement to get out of Iraq in the zeroes. It also protested the 2009 war on little Gaza.

A Bernie Sanders spokesperson told NBC News that the senator is “concerned about the platform AIPAC is providing for leaders who have expressed bigotry and oppose a two-state solution.” Sanders did not go to AIPAC in 2016, but Hillary Clinton has been a frequent guest and is close to the Israel lobbies and the Netanyahu government. She hasn’t given any sign of caring what happens to the Palestinians one way or another since about 1996. Nancy Pelosi and Chuck Schumer will be headliners at AIPAC this year. The organization says it isn’t disturbed by the exodus of presidential candidates, insisting that it focuses on Congress. Hmm. I wonder what it does for the congressional representatives?

The MoveOn.org call for a boycott comes after a long period in which some form of the the far right Likud Party and even further far right coalition partners have dominated Israeli politics for nearly two decades. This fact about Israel has in turn shaped AIPAC, which in the early 1990s would not have met with most of the people it now pushes on the American public as likeable democrats. In fact, Likud and its partners have adopted an unstated Greater Israel agenda of completely annexing the Palestinian West Bank, and the Syrian Golan Heights, conquered in 1967, and of keeping the Gaza Strip under a debilitating civilian blockade. These actions are illegal in international law, since the 1945 United Nations Charter forbids acquisition of other people’s territory through warfare.

The US political establishment, which accepts tens of millions of dollars in campaign contributions from various Israel lobbies, has dealt with this fascist search for Lebensraum or “living room,” as it was called in Central Europe in the 1930s, by pretending that there is an ongoing political negotiation toward a Palestinian state, which there has not been for nearly two decades.

The Democratic Left is calling BS on this charade, which is keeping 5 million Palestinians stateless and under some form of military Occupation for decades to come.

In the past year the Netanyahu government has

*enacted rules of engagement for unarmed civilian protesters in Gaza instructing the Israeli army to shoot them dead (a war crime);

*initiated a declaration that Israel’s sovereignty is solely invested in its Jewish citizens, making Palestinian-Israelis (21% of the population) second class citizens;

*made one of his coalition partners ally with the Kahanist Jewish Power faction; Kahanists are considered terrorists by the US government.

DC hit peak hypocrisy recently when AIPAC partisans in Congress actually implicitly condemned Rep. Ilhan Omar for “racism” for pointing out that AIPAC directs its affiliates to give money to congressional campaigns in order to influence-peddle for the terrorist-allied, racist Netanyahu government.

The grassroots left in the Democratic Party is fed up with this shell game. MoveOn.org’s web site notes,

“A new survey from MoveOn Political Action asked members if they believe progressive candidates vying for the 2020 Democratic presidential nomination should skip this year’s American Israel Public Affairs Committee (AIPAC) Policy Conference, held Sunday, March 24th to Tuesday, March 26th in Washington, DC. More than 74% of MoveOn members responded agree or strongly agree with the statement that “any progressive vying to be the Democratic nominee for President should skip the AIPAC conference.”

The survey, which entails a single prompt, “Any progressive vying to be the Democratic nominee for president should skip the AIPAC conference,” is prefaced by several facts, including:

*AIPAC spent tens millions of dollars in 2015 to defeat the Iran nuclear deal negotiated by President Obama along with our European and international allies––a historic diplomatic agreement that Trump has tried to derail since taking office.

*This year’s AIPAC conference is headlined by Benjamin Netanyahu … who has been indicted on bribery and fraud charges, and recently made a deal to bring the “Israeli KKK” … party into the next government.

*AIPAC has … been known to peddle anti-Muslim and anti-Arab rhetoric while giving platforms to Islamophobes.

*AIPAC has refused to condemn the antisemitism of Republicans, such as Trump’s friend and advisor Steve Bannon.”