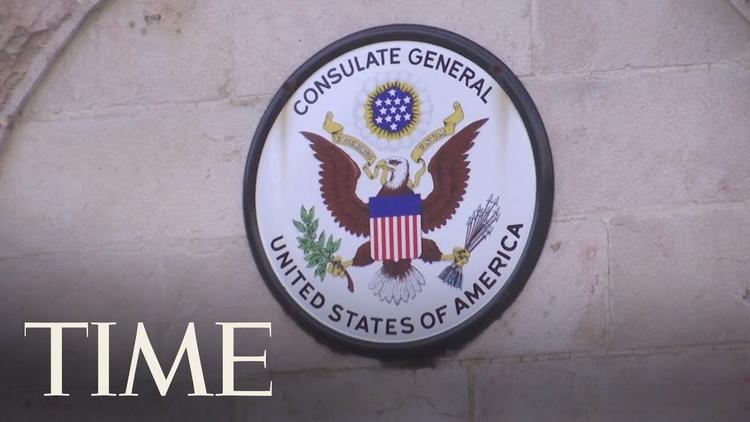 The US State Department announced on Tuesday that it is going to merge the American consulate general in East Jerusalem with the American embassy in West Jerusalem. A statement published on the embassy website in Israel said that, “We will continue to conduct all of the diplomatic and consular functions previously performed by the US Consulate in Jerusalem.”

This move was celebrated by the Israeli occupation authorities, although it has angered the Palestinians The Palestinian Authority suspended its relationship with the US administration when US President Donald Trump recognised Jerusalem as the capital of of Israel in December 2017 and relocated the US embassy from Tel Aviv to the holy city in May last year.

Saeb Erekat, the general secretary of the PLO’s Executive Committee, described the merger as “the final nail in the coffin” of the US administration as a sponsor of the peace process, which has in any case been moribund since 2014. According to a senior member of the PLO’s Central Committee, Hanan Ashrawi, “The Trump administration is intent on leaving no room for doubt about its hostility towards the Palestinian people and their inalienable rights, as well as its abject disregard for international law and its obligations under the law.”

Ashrawi insisted that the merger of the US consulate in Jerusalem with the US embassy to Israel, which is now located illegally in Jerusalem, is not an administrative decision. “It is a political assault on Palestinian rights and identity and a negation of the consulate’s historic status and function, dating back nearly 200 years.” She reiterated that this move “precludes any possible positive role for the current US administration in seeking peace and stability.”

State Department spokesman Robert Palladino, however, claimed that the decision was driven by Washington’s global efforts to increase the efficiency and effectiveness of its diplomatic engagements and operations. “It does not signal a change of US policy on Jerusalem, the West Bank, or the Gaza Strip.”

Speaking to MEMO, Professor of Political Sciences at Al-Najah University in the occupied West Bank Abdul Sattar Qasim described the merger as a “humiliation” for the Palestinians. “The US premise is that the Palestinian Authority did not accept the relocation of the US embassy to Jerusalem so that it decided to oblige the PA and the Palestinians to go to the embassy [for consular services] on their own two feet.”

“After this move, nothing remains hidden about the American intentions regarding the Palestinian cause,” added Dr Hanna Issa, an expert in diplomatic affairs. “The US has been undermining the Palestinians from penetrating any international body through its support for Israel, vetoes and stick. Now, it has cancelled any possible future recognition of a Palestinian state because it has cut its last diplomatic channel with the Palestinians by closing its consulate in East Jerusalem.”

The consulate-general in Jerusalem was established in 1844, Dr Issa pointed out. ”In moving it, the US has declared openly that there is no difference between East and West Jerusalem and both are parts of the same ‘Israeli’ city. In addition, the merger means that there is no need to have two separate representatives for the same country – Israel.”

Although Palladino stressed that Washington “remains fully committed to efforts to achieve a lasting and comprehensive peace that offers a brighter future to Israel and the Palestinians,” Prof. Qasim insists that this is not true. “The merger is not an innocent move. It is a fulfilment of Israeli promises [that Palestine is the Jewish State of Israel] and implementation of Israeli laws.” he said, “It is the prelude to US recognition of the illegal Jewish settlements in the occupied Palestinian territories.”

The US Ambassador to Israel, David Friedman, is a vociferous supporter of Israeli colonial-settlements, Qasim has no doubt that he will carry out this mission. The US consulate used to prepare reports about settlements for the US State Department; this will now be the mission of the embassy which is overseen by Friedman, so we can guess that they will be very favourable.

America’s moves on the ground give the lie to Palladino’s claim that the Trump administration is still committed to peace in the interests of both Israelis and Palestinians. It looks more like a brighter future for Israel and yet more gloom for the Palestinians. Not only has Washington doubled its support for Israel, but it has also cut more than $500 million from donations to the UN Relief and Works Agency for Palestine Refugees (UNRWA) and other aid programmes.

The Americans, explained Qasim, have been working hard to undermine the PA’s status as an autonomous entity which serves Palestinian interests. “The PA will lose its prestigious status after this move,” he said. “The Palestinian people will now see that the PA does not deserve any diplomatic representation from a long-standing ally which was regarded for decades as the country which would fulfil Palestinian dreams.”

In response, he suggested that the Palestinians should begin a popular protest campaign against the US and Israeli measures. Optimistically, Prof. Qasim added that this should not be stopped by the PA, although he does not expect the Ramallah-based authority to allow such a campaign to get off the ground.

Hanna Issa accused the Americans of “racial discrimination” against the Palestinians by closing the consulate. “What else does it mean given that the US has official representation offices for every nation, but the mission which was established 200 years ago in Palestine has been ended?” Nevertheless, he does not expect the PA or any Arab state to raise any complaints, because they have basically given the Israelis and Americans the green light to do what they want. The PA might be a loser in all of this, but it still does what it is told by the occupation authorities and their allies. “We have no hope in the PA or the Arab regimes,” Dr Issa concluded. “If the PA is serious about stopping the unilateral measures on the ground, it should unite the Palestinians, rearrange the Palestinian home and agree on a resistance programme.”

The merger of the US consulate and embassy in Jerusalem really does complete the abject humiliation of the people of Palestine. What will the Palestinian Authority do about it? Nothing whatsoever is my guess. And that is what is truly humiliating.