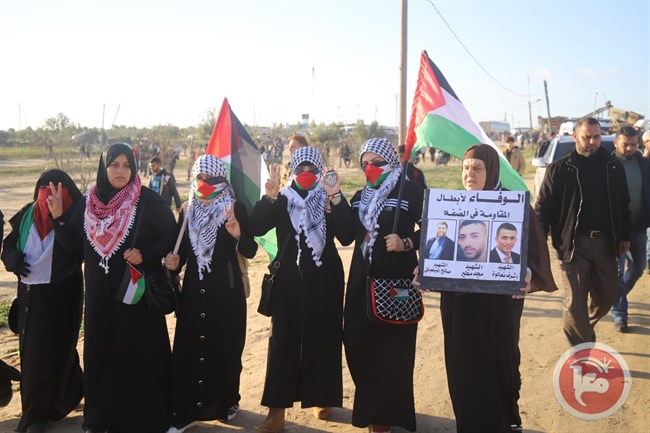 (Middle East Monitor) – What is the ‘Great March of Return’ but a people attempting to reclaim their role, and be recognised and heard in the struggle for the liberation of Palestine?

Much has been said about what the popular mobilisation in Gaza, which began on March 30, 2018, represents. Sympathetic views rightly understood the daily protests at the fence separating Israel from the besieged Gaza Strip, as a people frustrated with a protracted and inhumane blockade. Others also emphasised the fact that the protesters are mostly refugees from historic Palestine (today’s Israel), who are demanding their right to return home.

Unsympathetic, dubious media reports kept poking holes in the above facts, with Israeli and pro-Israeli media falsely claiming that the popular initiative is a Hamas-driven ploy to embarrass Israel by placing people in harm’s way for cheap media attention.

Nearly 250 unarmed Palestinians were killed and thousands more maimed and wounded by Israeli snipers since the protests began.

What is largely missing from the discussion, however, is the collective psychology behind this kind of mobilisation, and why it is so essential for hundreds of thousands of besieged people to rediscover their power and understand their true positions, not as hapless victims, but as agents of change in their society.

The narrow reading or the misrepresentation of the ‘March of Return’ speaks volumes about the overall underestimation of the role of the Palestinian people in their struggle for freedom, justice and national liberation, extending throughout a century.

Indeed, the story of Palestine is the story of the Palestinian people, for they are the victims of oppression and the main channel of resistance, starting with the Nakba – the creation of Israel on the ruins of Palestinian towns and villages in 1948. Had Palestinians not resisted, their story would have concluded then, and they too would have disappeared.

Those who admonish Palestinian resistance, including armed resistance, have little understanding of the psychological ramifications of strength – for example, the sense of collective empowerment and hope amongst the people. In his introduction to Frantz Fanon’s ‘Wretched of the Earth”, Jean-Paul Sartre describes resistance, as it was passionately vindicated by Fanon, as a process through which “a man is re-creating himself.”

And indeed, for 70 years Palestinians embarked on that journey of the recreation of the self. They resisted, and their resistance in all of its forms, moulded a sense of collective unity, despite the numerous divides that were erected amongst the people.

The ‘Great March of Return’ is indeed the latest manifestation of the ongoing Palestinian resistance.

It is obvious that elitist interpretations of Palestine have failed – Oslo proved a worthless, tired exercise in empty clichés aimed at sustaining American political dominance in Palestine as well as in the rest of the Middle East.

It is only when the Palestinian intellectual, guided by the resistance of her/his people, can repossess that collective narrative, that the confines placed on the Palestinian voice can finally be broken.

Until the Palestinian leadership is itself reclaimed by the Palestinian people as a platform for true democratic expression, it is the responsibility of the intellectual to safeguard and present the Palestinian story to the world in the most authentic, egalitarian way possible. Only then can Palestinians truly confront the Israeli Hasbara and US-Western corporate media propaganda, and finally speak unhindered.

Late Professor Edward Said wrote in ‘Covering Islam,’ that “facts get their importance from what is made of them in interpretation… for interpretations depend very much on who the interpreter is, who he or she is addressing, what his or her purpose is (and) at what historical moment the interpretation takes place.”

Middle East historiography is “a stepchild of orientalism,” wrote Dr Soha Abdel Kader, where “Middle East history bears the imprint of its birth up to the present in its use of sources, its methodology, and its isolation.”

Palestinian history too faced similar obstacles, thus, for decades, persisted in forced inertia. Most notably, since the commencing of the ‘peace process’, Palestinian historiography largely neglected ordinary people, and remained hostage to narrating the history of the elites, their political institutions, diplomatic events, and self-indulgent understanding of conflict, whether on a socio-economic level or that of violence and war.

In the Israeli Zionist narrative, Palestinians, if relevant at all are depicted as drifting nomads, an inconvenience that hinders the path of progress – a duplicate description to the one that regularly defined the relationship between every western colonial power and the resisting natives.

Within some Israeli political and academic circles, Palestinians merely ‘existed’ to be ‘cleansed’, to make space for a different From the Zionist perspective, the ‘existence’ of the natives is only meant to be temporary. “We must expel Arabs and take their places,” wrote Israel’s founding father, David Ben Gurion.

The assigning of the Palestinian people the role of dislocated, disinherited and nomadic people without worrying much about the ethical and political implications of such a decision has erroneously presented Palestinians as a docile and submissive collective. Again, they merely existed to be denied that very existence by a powerful, ‘chosen’, emboldened and ruthless Zionist.

This is why it is imperative that we develop a clearer understanding of the layered meanings behind the ‘Great March of Return.’ Hundreds of thousands of Palestinians in Gaza did not risk their lives over the last year simply because they required urgent medicine and food supplies.

Palestinians did so because they understand their centrality in their struggle. Their protests are a collective statement, a cry for justice, an ultimate reclamation of their narrative as a people – still standing, still powerful and still hopeful after 70 years of Nakba, 50 years of military occupation and 12 years of unrelenting siege.