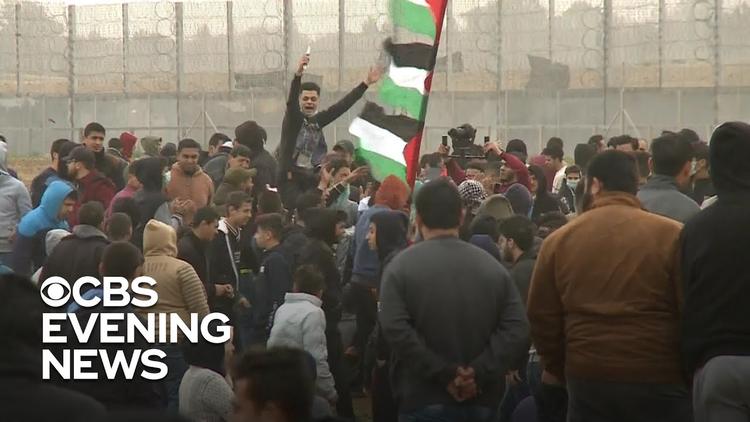 Ann Arbor (Informed Comment) – As an unprecedented 40,000 Palestinians in Gaza marched for the right to return, marking the one-year anniversary of the beginning of weekly such marches, Israeli snipers shot into the Gaza Strip, killing 4 youth and wounding at least 207. The Israeli army uses military-grade tear gas on the crowds, and the tear gas cannisters fired into crowds often hit individuals, killing them or causing severe injuries.

Lazy journalists keep talking about border “clashes,” but most of the thousands of Palestinians wounded in the past year have been shot on Gaza soil at a distance from the fence. Although the Israeli Army propaganda arm attempted to imply that the sniper fire was justified because thousands of Palestinians rushed the border fence keeping them imprisoned in Gaza, the very picture the army included showed that the masses of protesters were well back from the border and just a handful of young men were ineffectually throwing stones in the general direction of the Israeli army line, which they could not reach.

Folks, look closely at this video. It clearly shows not 40k but 8-10 people actually “challenging” Israel at the fence, not launching explosives or shooting guns but picking up stones & throwing them, in a profoundly futile gesture given Israeli forces are far back & armored. https://t.co/FOyCOi15ST

Shooting civilian protesters who pose no realistic danger to troops is a war crime. Systematically doing so, as Israeli snipers have been ordered to do in the past year by the fascist Likud government of Binyamin Netanyahu, amounts to “crimes against humanity.” Netanyahu and his henchmen (which now include terrorist Kahanist elements) should be indicted by the International Criminal Court under the Rome Statute, ratified by most countries in the world by 2002.

Jewish Voice for Peace wrote of the injuries:

"When you have a huge number of almost identical injuries, where many of the patients were 150 metres away, not in direct contact with Israeli soldiers, you realise this is an intentional policy rather than collateral damage" #LetGazaLive #GreatReturnMarch https://t.co/alyLYgYvkj

The Gaza Strip is inhabited by 1.8 million Palestinians, 70% of them from families that were kicked out of their homes in what is now Israel by militant Zionists in 1948, who then locked them up in the small territory. Israel conquered Gaza in 1967 and until 2005 intended to colonize it, sending in thousands of Israelis to hog the best land and water. The bellicose prime minister Ariel Sharon decided in 2005 that the Israeli squatters could not be protected effectively and pulled them out.

The George W. Bush administration presided over elections in January, 2006, for the Palestine Authority created by the Oslo Peace Accords. Hamas won those elections, a result that was unacceptable to Israel and ultimately to Bush (even though he had insisted on letting Hamas run). Bush and the Israelis staged an anti-Hamas coup in the Palestinian West Bank, but were unable to overturn the election results in the Gaza Strip itself. Thwarted in its attempt to impose a puppet strong man in Gaza, Israel replied to the Hamas victory by imposing a severe blockade on the civilians of Gaza in 2007, which still stands.

Gaza thus became, and remains, a huge concentration camp encircled on land, water and in the air by the Israeli military. Gaza fishermen are routinely fired upon by Israeli sailors, limiting their ability to fish (fish provide a significant proportion of protein available in Gaza).

In one of the creepier episodes in the sordid history of settler colonialism, the Israeli military figured out how many calories each Palestinian in Gaza needed to avoid actual malnutrition, and wanted only to allow that much food into the Strip, so that Palestinian civilians could be kept on a punitive diet without any of them causing a scandal by starving to death. The current sanctions do not keep out food, but they do impose crippling restrictions on Palestinian exports and prevent key building and other infrastructural needs from entering.

The UN worries that Gaza will be uninhabitable in only a few years, in part because of the salinization of its primary aquifer. That problem could be resolved by a desalinization plant, but it seems unlikely Israel will allow one to be built. Some Israeli members of parliament have spoken of the desirability of ethnically cleansing the Palestinians from Gaza entirely.

Despite occasional UN condemnation of the Israeli blockade on Palestinian civilians (which is illegal in international law, especially given that Israel is still the Occupying Power in Gaza), the world has turned a blind eye to this ongoing Israeli atrocity. Hence, the weekly marches begun in March of 2018. That the Israeli government would formally decided to deal with the largely peaceful protests by simply shooting unarmed civilians on the Gaza side of the border would have been unthinkable even a decade ago. That the world would remain silent about these criminal tactics is unimaginable.

The US Congress condemned Rep. Ilhan Omar for alleged racism because she criticized the Israeli treatment of the Palestinians. Congress has had nothing to say about the sniping at civilian populations on the part of the Israeli army, nor has it condemned the many racist remarks of Prime Minister Binyamin Netanyahu, nor even his current electoral alliance with a Kahanist faction affiliated to groups declared terrorist organizations by the US government.