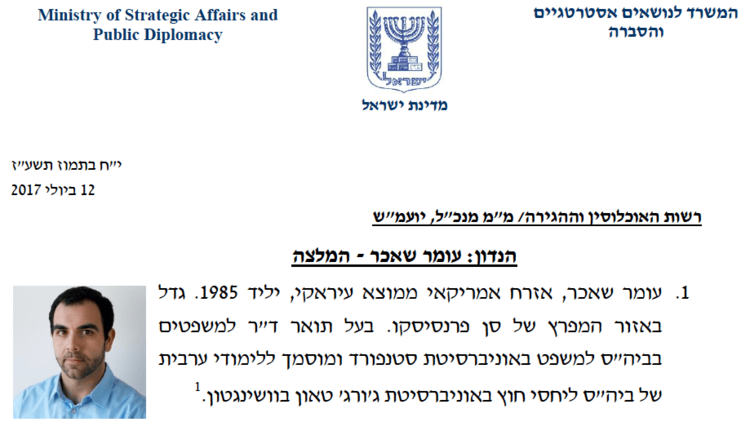 (Jerusalem) – An Israeli court on April 16, 2019 upheld the Israeli government’s order to deport Omar Shakir, the Human Rights Watch Israel and Palestine director, Human Rights Watch said today. The ruling by the Jerusalem District Court comes in response to a lawsuit filed in May 2018 by the organization, and Shakir challenging the government’s decision to revoke Shakir’s work permit and the constitutionality of a 2017 law barring entry to Israel for people who advocate so-called boycotts of Israel or Israeli settlements.

In a new and dangerous interpretation of the law, the court found that Human Rights Watch research and advocacy calling for businesses to stop facilitating abuses in Israeli settlements in the occupied West Bank constitutes a call for boycott. The ruling sets a precedent that could hamper the work of other advocacy organizations and jeopardize the status of other rights workers in Israel.

“Israel portrays itself as the region’s only democracy, but is set to deport a rights defender over his peaceful advocacy,” said Tom Porteous, deputy program director at Human Rights Watch. “The decision sends the chilling message that those who criticize the involvement of businesses in serious abuses in Israeli settlements risk being barred from Israel and the Israeli-occupied West Bank.”

This case is the first in which the government has relied on a 2017 amendment to the Law of Entry to deport someone who is already lawfully present in the country.

The court based its ruling on a determination that Shakir has “continuously” called for boycotts of Israel, citing his student activism dating back to 2006 before he joined Human Rights Watch, as well as his subsequent work for the organization. The decision describes as “boycott-promoting activities” Human Rights Watch’s research on the activities of businesses, including the global tourism companies Airbnb and Booking.com, and its recommendation that they cease operating in Israeli settlements in the West Bank. Judge Tamar Bazak-Rapoport held that Israel’s anti-boycott law does not distinguish between boycotts directed at Israel and those directed at only West Bank settlements. The ruling did not address the challenge to the constitutionality of the 2017 amendment.

The interior minister’s May 7, 2018 decision to revoke Shakir’s work visa and order him to leave the country was the first ordering a Human Rights Watch staff member to leave Israel since the organization began monitoring events in Israel and Palestine three decades ago. The day before Shakir’s deadline to leave, the Jerusalem District Court issued an injunction allowing Shakir to remain in Israel until the court ruled on the case.

The interior minister based his decision on a government-compiled dossier on Shakir’s activism dating more than a decade before he began covering Israel and Palestine for Human Rights Watch. It said in a May 7 letter that the decision “does not constitute a principled or sweeping refusal for the organization to employ a foreign expert,” and that “no information has surfaced” regarding Shakir promoting boycotts during his time at Human Rights Watch.

Yet in court, the government’s argument largely focused on Human Rights Watch work on the activities of businesses in settlements. In court filings and hearings on June 27, 2018 and March 11, 2019, the government highlighted Shakir’s tweets setting out the Human Rights Watch position that businesses should halt their activities in illegal West Bank settlements. A 120-page submission by the government to the court in January includes, among other things, Shakir’s tweets promoting the organization’s research and recommendations regarding Airbnb’s and Booking.com’s rental listings in settlements.

The 2017 amendment to the Law on Entry authorizes the interior minister to refuse entry to activists or representatives of organizations who publicly call for a boycott of Israel or have made a commitment to participate in such a boycott. In October 2018, the government denied entry to Lara al-Qassem, a Palestinian-American student, but the Supreme Court permitted her to enter the country after authorities had held her for 15 days at the airport. The court in that case interpreted the amendment narrowly, saying it authorized denials of entry only for those currently active in promoting boycotts and who might use their presence in Israel to promote boycotts.

Neither Human Rights Watch nor Shakir as its representative promotes boycotts of Israel. The advocacy in question focuses exclusively on the Israeli occupied West Bank. Human Rights Watch has found that businesses operating in West Bank settlements inherently benefit from and contribute to serious violations of international humanitarian law and, on that basis, as part of its global efforts to urge companies to meet their human rights responsibilities, has called for companies to cease operations in settlements. Human Rights Watch also defends individuals’ right to express their views through nonviolent means, including participating in boycotts.

The deportation ruling comes amid sustained efforts to muzzle criticism of Israel’s human rights record. The Interior Ministry has denied entry to a number of other international rights advocates, accused Israeli advocacy groups of “slander” and of discrediting the state or army, imposed extensive financial reporting requirements on Israeli rights groups that burden their advocacy, and subjected Palestinian rights defenders to travel restrictions and even arrest and criminal charges.

In February 2017, the Interior Ministry denied Human Rights Watch a permit to hire a foreign employee, on the grounds that it engaged in “politics in the service of Palestinian propaganda, while falsely raising the banner of human rights,” but reversed course and issued the permit two months later.

As part of its mandate, Human Rights Watch conducts research and advocacy that exposes and challenges violations by all actors in the region, including the Palestinian Authority and the Hamas authorities in Gaza. In 2018, in addition to documenting abuses by Israeli forces, Human Rights Watch published a report on systematic arbitrary arrests and torture of critics and opponents by the Palestinian Authority and Hamas and has reviewed Palestine’s record on women’s rights.

“Israeli authorities should focus on ending their serious human rights abuses rather than muzzling groups reporting on them,” Porteous said.

Photo: “A dossier compiled by Israel’s Strategic Affairs and Public Diplomacy Ministry on the activities of Omar Shakir, Human Rights Watch’s Israel and Palestine Director, which served as the basis for the government’s May 7, 2018 decision to revoke his work visa.