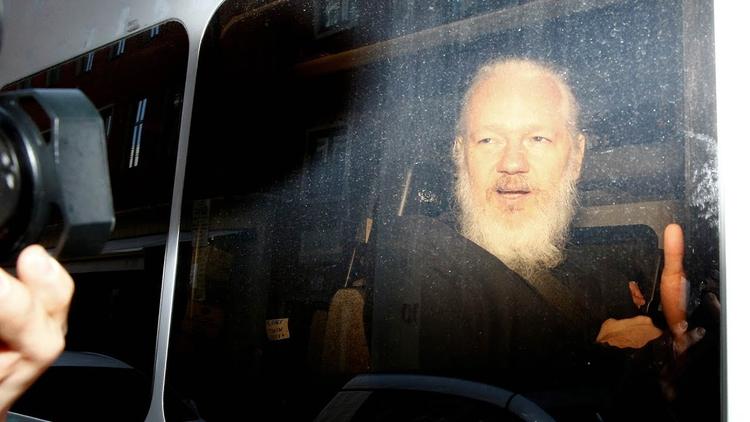 (Commondreams.org) – The U.S. Justice Department on Thursday indicted WikiLeaks founder Julian Assange for a “computer hacking conspiracy,” a charge some corporate talking heads and reporters immediately touted as evidence that journalism is not under threat.

But press freedom advocates, Assange’s attorneys, WikiLeaks staff, and other critics warned that the exact opposite is the case—and argued Assange’s extradition to the U.S. would set a dangerous precedent for journalists everywhere.

“There is no assurance that there would not be additional charges when he is on U.S. soil. And I think that this was an angle in the approach to increase the likelihood of him being extradited. That is obvious.”
—Kristinn Hrafnsson, WikiLeaks editor-in-chief

“This precedent means that any journalist can be extradited for prosecution in the United States for having published truthful information about the U.S.,” Jen Robinson, Assange’s attorney, told reporters during a press conference in London on Thursday.

Speaking alongside Robinson, WikiLeaks editor-in-chief Kristinn Hrafnsson argued the Justice Department’s seemingly narrow indictment of Assange for “hacking”—rather than a more sweeping charge for the act of publishing classified information—is an “obvious” ploy to boost the likelihood that the U.K. will extradite him to the United States.

“It is quite obvious the U.S. authorities have picked just one element of what they have been working on for a long time,” Hrafnsson said. “There is no assurance that there would not be additional charges when he is on U.S. soil. And I think, and I believe, that this was an angle in the approach to increase the likelihood of him being extradited. That is obvious.”

British authorities confirmed that Assange was arrested in part due to “an extradition warrant on behalf of the United States authorities.”

The Justice Department alleges in its indictment (pdf) that Assange conspired with U.S. Army whistleblower Chelsea Manning to hack into a Pentagon computer network.

The indictment also states that Assange “encouraged Manning to provide information and records” from U.S. agencies, worked to “conceal Manning as the source of the disclosure,” and used an encrypted chat service to “collaborate” on the release of classified information related to Guantanamo Bay as well as U.S. wars in Iraq and Afghanistan.

“The United States should finally seek to come to terms with the war crimes in Iraq that it has committed rather than attack and imprison those who sought to expose the truth of it.”
—Center for Constitutional Rights

In a statement, Trevor Timm, executive director of the Freedom of the Press Foundation, noted that while the Justice Department “has so far not attempted to explicitly declare the act of publishing illegal, a core part of its argument would criminalize many common journalist-source interactions that reporters rely on all the time.”

“Requesting more documents from a source, using an encrypted chat messenger, or trying to keep a source’s identity anonymous are not crimes; they are vital to the journalistic process,” added Timm. “Whether or not you like Assange, the charge against him are a serious press freedom threat and should be vigorously protested by all those who care about the First Amendment.”

Despite these ominous warnings from press freedom advocates, many reporters and cable news pundits continued to loudly parrot the Trump Justice Department’s line, claiming the indictment is not a threat to journalism.

“The indictment makes it clear that this has nothing to do with the publishing of materials,” tweeted NBC News journalist Tom Winter.

Glenn Greenwald, co-founder of The Intercept, was quick to push back.

“I’m not surprised to see NBC journalists uniting behind Trump DOJ to justify the criminalization of WikiLeaks—NBC is fully aligned with the CIA/NSA long obsessed with destroying [WikiLeaks]—but this tweet is false: the indictment also charges Assange with encouraging his source,” Greenwald tweeted.

In a statement, the Center for Constitutional Rights (CCR) decried Assange’s arrest and possible extradition to the U.S. “a worrying step on the slippery slope to punishing any journalist the Trump administration chooses to deride as ‘fake news.'”

“The arrest sets a dangerous precedent that could extend to other media organizations such as the New York Times, particularly under a vindictive and reckless administration,” CCR said. “The United States should finally seek to come to terms with the war crimes in Iraq that it has committed rather than attack and imprison those who sought to expose the truth of it.”

In a column late Thursday for the Washington Post, veteran journalist and editor Margaret Sullivan warned her industry colleagues against ignoring the principles this case calls into question.

“Before we turn our backs on Assange,” Sullivan wrote, “we ought to think deeply about what’s at stake.”

While “casting him to the wolves as nothing but a narcissistic, bad actor—’not like us,’ of course—may seem tempting,” she added, the consequences could be dire.

“The gray area here is bigger than it looks,” she concluded, “and so are the dangers to traditional journalism and the public interest.”

And HuffPost journalist Ashley Feinberg put it this way: “Assange is a piece of shit which is exactly why this is the perfect case for [the U.S. government] to set a very dangerous precedent with.”