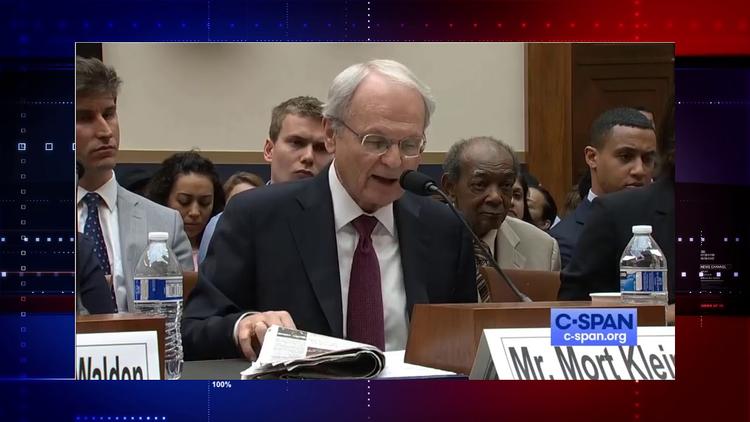 “Klein conveniently neglected to mention that the Tree of Life shooter frequently echoed Donald Trump’s anti-immigrant sentiments—-and was frustrated that, he felt, Jews were holding him back. The Christchurch murderer specifically named Trump as “a symbol of renewed white identity and common purpose” in his manifesto.”

Klein, who has referred to Arabs as “filthy animals,” and has denied that Israel is militarily occupying the Palestinian West Bank, came across as completely unbalanced. He kept moaning weirdly in between making obviously false charges, to which the Council on American Islamic Relations objected.

Klein spoke at the same hearing where Mohammad Abu-Salha had testified, bringing the audience to tears with his account of losing daughters Razan and Deah Barakat and his son-in-law Yusor Mohammad to a hate crime (the shooter is a New Atheist who despised religion, and members of that movement often especially demonize Muslims). And then Klein pranced on and spent most of his time bashing Muslims.

Mort Klein is now telling Dr. Mohammad Abu-Salha, a man who is at this white supremacy on social media hearing because he lost two daughters and a son-in-law in a hate crime, about the "aspects of the Quran that promote murder" and that "we need to have Muslims step up."

Mohammad Abu-Salha pushes back at Mort Klein for trying to make the conversation “Islamophobic” while “I’m talking about my tragedy & my loss.” Chided Klein for trying to turn the discussion to Israel, foreign policy instead of domestic extremism. #hatecrimehearing

At one point in his screed against Muslims, Klein quoted Ayan Hirsi Ali, a Somali former Muslim, maintaining that she and her sister had been shown Qur’an verses urging violence against Jews.

This false charge, that the Qur’an or Muslim scripture commands Muslims to commit murder, is a contemporary anti-Muslim Blood Libel similar to the one that medieval Christians spread against Jews.

The Qur’an is admittedly badly translated, but the worse problem is that non-Muslims do not read it contextually. You can’t know what a verse means unless you know which episode it refers to. If someone in a novel says, “I’ll kill you!” it sounds horrible; but what if the threat is made in the novel by a battered wife trying to fend off an abusive husband, who she fears is going to finish her off? Or you have Jesus saying that he came not to bring peace but a sword. Does that mean all Christians are instructed to go around whacking people with swords?

In fact, the Qur’an condemns the taking of life except in self-defense. I wrote in my book on Muhammad, that the Qur’an

forbids murder, retelling the story of Cain and Abel and then quoting the Palestinian Talmud. It says (The Table 5:32), “For this reason, we decreed for the children of Israel that those who kill another person—-save in punishment for murder or the wreaking of corruption in the land—-it is as though they had killed all human- kind. And those who revive someone, it is as though they gave life to all humankind. Our messengers brought them clear proofs, but many of them thereafter committed excesses in the land.” The reasoning of the rabbis had been that Adam was a single individual, and if he had been murdered, then the whole human race would have been prevented from existing. Muhammad preferred the universal form of this rabbinical teaching, equating the murder of anyone of any faith to genocide. Outside of formal defensive war on the battlefield, and outside the structured judicial context of a death penalty for murder or other capital crimes imposed by duly constituted authorities, killing is always wrong, according to the Qur’an.”

I discuss this in my book,

The Qur’an does not advocate killing Jews. Again, I wrote, the Qur’an is philo-Judaic:

“The Hobbling 45:16 says, “We bestowed scripture, judgment and prophethood on the children of Israel and nourished them with good things and preferred them above the nations.”

The Qur’an sees the children of Israel as the chosen people.

The Qur’an sees Jews and Christians– People of the Book– as fallible human beings, but recognizes that some of them are spiritually exemplary:

“The Family of Amram 3:113 declares that each of the religions contains persons of higher and lower ethical values. It says, “They are not all the same: Some among the scriptural communities are an upstanding nation, who recite God’s verses in the watches of the night while bowing in prayer.”

‘The Heights 7:159 insists, “Among the people of Moses is a nation that guides others by the truth and establishes justice.” ‘

Some anti-Muslim polemicists (and some bigoted Muslims) misunderstand a Qur’an verse as speaking of Jews as “apes.” This is a misunderstanding, as I have explained here:

The Qur’an does not describe “Jews” in 7:166 as “apes, despised and rejected.” This passage is a midrash or commentary on Numbers 11, which talks about how some of the children of Israel when wandering in the desert got tired of eating manna from heaven and broke the sabbath to seek other food. Numbers 11:33 says, “the anger of the Lord was kindled against the people, and the Lord struck the people with a very great plague.” The rabbis who later commented on these passages said that God punished the miscreants by inflicting on them bodily afflictions.The Qur’an is saying something similar, as Professor Uri Rubin of Hebrew University has argued. This passage is not about Jews in general but retells biblical denunciations of, and the visiting of a great punishment on, the faithless.”

The Qur’an praises Jews in general: “Children of Israel, remember My blessing wherewith I blessed you, and that I have preferred you above all beings.” [Qur’an, 2:122]

So, to conclude: The Qur’an lauds Jews as having been chosen and preferred by God, it says that in the Hebrew Bible is “guidance and light,” it says that some among the followers of Moses offer ethical guidance to non-Jews inasmuch as they live exemplary lives. It allows intermarriage and sharing meals between Muslims and Jews.

The Qur’an never urges attacking Jews. It did permit Muslims to defend themselves from bellicose pagan aggressors (al-kafirun) when the latter mounted military campaigns against the Muslim refuge city of Medina. It did also condemn “those who paganized from among the People of the Book,” i.e. those Jews and Christians who allied with militant pagan Mecca against the Muslims and tried to help wipe them out. But that faction of biblical communities allied with pagans did not account for all Jews.

Klein disgracefully turned a hearing on the dangers of right wing white nationalism into an attack on “the left,” he excused the baleful influence of Trump in whipping up white nationalist fanatics, and he tried to turn the hearing into an Inquisition instead against Muslim Americans, a significant victim of white hate groups.

And, he vilified the Qur’an, the scripture of the Muslims, stupidly and ignorantly claiming it foments violence against Jews. He participated in the very Blood Libel against Muslims that had been implicated in the New Zealand mosque shooting.

Klein is on the side of hate, not not of peace.