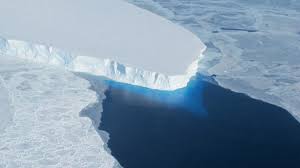 Ann Arbor (Informed Comment) – Sea level rise over the next 80 years may have been underestimated by the conservative Intergovernmental Panel on Climate Change (IPCC), according Scientists Jonathan L. Bamber, Michael Oppenheimer, Robert E. Kopp, Willy P. Aspinall, and Roger M. Cooke writing in the Proceedings of the National Academy of Science.

The IPCC had said that the seas would likely rise about a meter (yard) or perhaps 4 feet by 2100. The new study says that if humanity doesn’t take the climate catastrophe any more seriously than it is right now, it isn’t just the Greenland ice sheet that will be in trouble but also those of the Arctic and Antarctica. And if you add in all that melted ice that will plop into the ocean, sea levels could go up by 6 to 6.5 feet by the end of this century. Scientiests have also gotten better at measuring ice sheet loss.

Many major ports and coastal cities would be massively endangered by that kind of sea level rise. Shanghai, one of the world’s major container ports that may have provided you with your smart phone, could see 17 million people displaced. Miami, New Orleans, New York and many other US ports are now considered to be endangered.

It should also be remembered that the new estimate of 6 feet of sea level rise is a global average. The oceans are uneven and in some places are already 4 feet higher than in others. And, there are storm surges. If you have a 6 feet rise and then have a storm surge on top of that, the impact would be dramatic. Manhattan suffered significant flooding because a storm surge hit that was 14 feet high, and the storm wall was 12 feet.