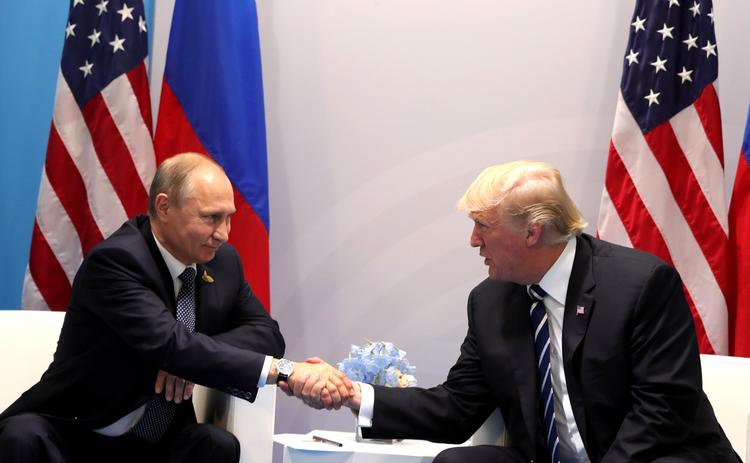 (Informed Comment) – There is a dangerous confusion in US national security policy when evaluating relations with Russia and China. The Trump administration has made China the main US enemy when it is Russia that has attacked the US electoral system, a barely disguised Russian force has carved out a rump state in Ukraine and seized Crimea, and President Putin has trumpeted the development of hypersonic and other new strategic weapons in the prelude to a possible new nuclear arms race. Trump has responded with indifference to these provocations, taking Putin at his word on the elections and never offering a critical word about the Ukraine invasion, the nuclear danger, or political repression in Russia.

Trump said last Friday (May 3) that he had spoken with Putin for one hour and had said nothing about Russian meddling in US elections. But Trump did say they had a meeting of the minds on the Mueller report-— “no collusion.” When it comes to national security, Trump is devoting more attention to the Mexico border than to Russia-—an extraordinary dereliction of duty.

Some US experts on Russia and Europe have been calling on the Trump administration for many months to take stronger action to guard against Russia deploying his hackers and social media trollers again in 2020. Though Congress has approved sanctions, much to the chagrin of Russians who had counted on Trump to remove them, Trump himself has resisted sanctions or any other counter-moves to challenge Putin. Indeed, as has been widely reported, the White House staff is under instructions to avoid bringing up Russian interference with Trump, and Jared Kushner made the empty-headed remark that it’s nothing more than “buying some Facebook ads.” Considering the Mueller report’s findings on the extensiveness of Russian interference, you would think it would be front and center in US national security efforts—an “opportunity” for the president to demonstrate leadership, as Ivo Daalder puts it in an excellent commentary (www.chicagotribune.com/news/opinion/commentary/ct-perspec-mueller-report-trump-russia-elections-daalder-20190425-story.html).

But Donald Trump is not going to lead anything; he evidently thinks talking about Russian interference is equivalent to supporting Hillary’s election. (It’s all about him, as usual.) That leaves the US response up to intelligence and homeland security officials. Yet they are only talking about defensive measures—shoring up the election system to deal with Russia’s presumed next attack. That’s like believing we are going to be bombed but only planning on building better shelters. Deterrence is necessary too, such as by having NATO escort Ukraine ships in the Sea of Azov, where they came under Russian attack last year (see Stephen Blank’s essay at www.atlanticcouncil.org/blogs/ukrainealert/vladimir-putin-does-shakespeare).

By contrast, along the Beltway there is no reluctance to talk about punishing China over its trade and human rights policies; a bipartisan consensus in Congress seems to have emerged that the era of engaging China is over. Quite a few China specialists as well as many in the liberal media seem to agree. Xi Jinping has certainly done things that merit strong criticism, starting with the incarceration and “reeducation” of roughly a million Uyghurs and China’s assault on independent lawyers, journalists, and rights activists. But unlike Putin, Xi is not raving about new strategic weapons, is not engaged in an attack on the US election system (twenty-six Russians, not Chinese,have been indicted), and is not carrying out a media campaign focused on the threat from the West. While Putin is currying favor with far-right white nationalists in Europe, seeking to exploit anti-immigrant and Euroskeptic sentiment, Xi is busy using China’s wealth to buy influence, developing trade and investments in Europe and everywhere else under his Belt and Road Initiative.

Yes, China has militarized the disputed South China Sea islands and is rapidly building up its naval capabilities. And yes, there are reasonable concerns about China’s economic espionage, as the FBI calls it, in search of technological secrets. But these Chinese actions are in a class different from the opposing armies that face each other all along the line separating Russia from NATO/Europe. Diplomacy is the defining difference: Whereas Washington has multiple active channels, from Track I to Track III, for discussions with China on military, cyberhacking, and many other issues, diplomacy with Russia is in a deep freeze.

Where’s the logic, then, for hostility toward China? The issues in controversy between the US and China do not, after all, threaten national security. By contrast, Russia’s aims strike at the heart of our democracy and our alliances; they hold the potential for war by miscalculation. The bottom line must be Russia’s termination of election interference in any form, not just in the US but in Europe as well. Once that is verified, of course we should put an easing of sanctions and NATO’s extension into eastern Europe on the table. Meantime, the US should explore for common ground with Putin—for example, on strategic arms, Iran, North Korea, and Ukraine.

To be clear, I am arguing for putting Russia on notice to prevent a repeat of 2016, not for goading Moscow into a fight. Nor am I arguing for setting aside trade, human rights, and other disagreements with China. But the two sets of issues cannot be equated: the US is again in a cold war with Russia, but not with China, and the US has far more common interests with China than with Russia.