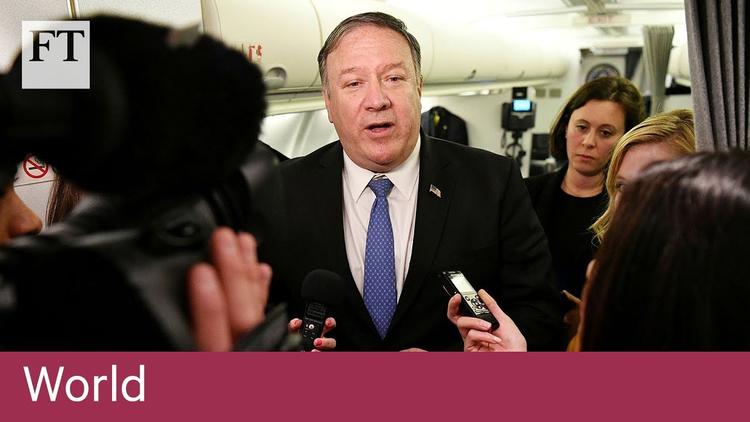 Ann Arbor (Informed Comment) – US secretary of state Mike Pompeo made a surprise four-hour visit to Baghdad on Tuesday in connection to the panic he is trying to trump up, along with US national security adviser and Sheldon Adelson plant John Bolton about Iran supposedly planning to attack US troops in the Middle East.

For his part, Iraqi prime minister Adel Abdul Mahdi said in remarks to the press that Iraq will undertake to ensure the safety of the some 5,000 US troops in Iraq, who are helping the Iraqi army mop up ISIL remnants.

At the same time, Abdul Mahdi insisted that Iraq would not participate in any economic boycott of any country, which is to say that he declined to cooperate with the Trump administration’s attempts to squeeze Iran.

Iraqi sources said after the visit was over that Bolton offered to give Iraq a temporary waiver with regard to its trade ties with Iran. He may as well, since he is unlikely to get much cooperation from Shiite-ruled Iraq in the blockade on Iran.

The Trump administration has imposed an international financial blockade on Iran trade, which has no UN backing or basis in international law. Iran is in compliance with its obligations under the 2015 nuclear deal, according to UN inspectors. In contrast, the United States has breached that treaty by its blockade.

Tuesday night I watched Iranian president Hassan Rouhani give a speech in which he said that the 2015 nuclear deal is on life support, and that while Iran is not withdrawing from it, it will cease observing some self-limits it had imposed beyond the strict letter of the treaty. Iran will no longer limit enrichment of uranium to 3.67 percent (what is needed to make fuel for generating electricity). It has to be enriched to 95% for a bomb, but every increase above 3.67 percent is a tiny step toward the latter, and concerning to the world community. Rouhani said that Iran may also renovate the heavy water reactor at Arak. Heavy water reactors are much easier to use to make fissile material than light water reactors. I’m confused by this statement, since I thought bricking in the Arak proposed reactor was one of the four cardinal points of the 2015 nuclear deal.

Rouhani’s plans are foolish, since they just give ammunition to the US War Party, even though they are not steps toward a bomb.

The only two countries in the greater Middle East who actually have nuclear weapons are Israel and Pakistan. Iran does not, and apparently has never intended to develop such weapons, in part on religious grounds.

Pompeo and Bolton have not only claimed credit for sending a US aircraft carrier battle group to the Gulf but they have also sent four B-52 bombers to al-Udeid Air Force Base in Qatar, in hopes of spooking the Iranians into doing something rash so that they can rally the gullible American public to a war on Iran. Qatar has correct relations with Iran, and this move puts Doha in a difficult position. Iran came to Qatar’s aid in 2017 when the Saudis imposed a blockade on it, at a time when Trump was tweeting lies about Qatar and siding with the Saudis.

US intelligence sources leaked to the US press such as The Daily Beast that Bolton and Pompeo are hysterically hyping the intel, which is not as specific or threatening as they are making it out to be.

The practice in journalism is to be cautious about calling people liars, since we cannot know what is in their heads, and what they say may be incorrect but a sincerely held belief. I think George W. Bush, Dick Cheney and the rest of that crew used the reluctance of journalists to call them out as liars to political advantage, and it may have helped Bush win a second term.

So let me be clear. Mike Pompeo and John Bolton are known, serial, dedicated liars. Bolton helped lie the US into the Iraq War. Pompeo assiduously lied about the Benghazi affair. Nothing they say about Iran should be given any credence whatsoever.

The American security establishment has seldom actually understood the relationship of Iran to Iraq’s Shiites. For the 8.5 years the Pentagon occupied Iraq, mostly in the Bush era, US government personnel were absolutely convinced that Shiite leader Muqtada al-Sadr was a cat’s paw for Iran. But the al-Sadrs think of themselves as arch Iraqi nationalists and Muqtada’s father had contested the top clerical post in Iraq with the Iranian Ali Sistani. Muqtada’s followers, poor Iraqis of the cities and the south, deeply resent Iranian influence in Iraq.

On the other hand, al-Sadr is a staunch anti-imperialist, who has said that if the US ever attacked Iran, his followers would defend it. In fact, al-Sadr is upset about the US pressure on Iraq to stop doing business with Iran, and said in late April that if Iraq was going to be put in the middle of Washington and Tehran, it was better that the US embassy be closed and the US kicked out of Iraq.

Muqtada al-Sadr threatens #US embassy in #Iraq saying it must be closed to stop US interference in Iraq or else it will be a target again by the “resistance”. pic.twitter.com/mbZJbPmFRr

Iraq does billions of dollars in trade with Iran and depends on that country for electricity in some provinces.

Al-Sadr’s Sairoun Party has 54 seats in the 329-seat parliament and was a power broker who helped ease the current prime minister, Adel Abdul Mahdi, into power.

Bush’s illegal war of aggression on Iraq is the gift that keeps on giving to the US fascists, since there are ways in which it now sets up Iran for similar treatment. I heard a congressman speaking on tv who had served in Iraq estimate that one-fifth of US troops killed in Iraq were killed by Iran or Iran proxies. That is such a bullshit statistic. There were never any Iranian troops in Iraq in that period, and many US troops who were killed by Shiite militias were killed by Sadrists or radical offshoots of Sadrism, which is to say, by Shiite Iraq nationalists who also disliked Iran (one group burned down the Iranian consulate in Basra). The US military also had this mysterious theory that Iraqi Sunnis could not use shaped charges against US tanks, and tended to count all shaped charge attacks as Iranian, even in al-Anbar province where there are no Shiites to speak of. The US invaded Iraq on the theory that its Sunni-dominated government was 2 years from having a nuclear weapon, but Iraqi Sunnis can’t get up a shaped charge, a technology that goes back to WW II?

Besides, no US troops would have been killed at all if the then president had not given them an illegal order to go occupy somebody else’s country. Using the fact that they faced resistance to this neocolonialism to stage more neocolonialism is fiendishly clever.

The Americans also assumed that Iraqi Shiites voted for fundamentalist parties because of Iranian influence on the elections, but the Da’wa (Islamic Call Party), which generally did well, was a longstanding Iraqi Shiite party representing the professional middle class and which rejected Khomeinism. Iraqis had their own reasons for voting as the did.

Ironically, the Shiite militia that the US generally got along with was the Badr Corps, which is more or less a branch of the Iranian Revolutionary Guards.

It was pro-Iran Iraqi Shiite militias, helped by small numbers of advisers from the Iranian Revolutionary Guards Corps, who did a lot of heavy lifting in defeating ISIL after the US-built Iraqi army collapsed, and it seems clear that despite denials on both sides, the US occasionally gave them air support. But Iran would have a right to be annoyed with the US for policies that led to the rise of ISIL on its borders in the first place.

Bolton and Pompeo and Trump don’t actually know anything about the Middle East nor do they care about the welfare of its people. Bolton and Pompeo are warmongers and like the idea of bullying Iran, and they are also closely tied to the fascist Likud Party in Israel, which has been plumping for a war on Iran for decades. Pompeo is in the back pocket of the Koch brothers Big Oil lobby, which would benefit from higher prices if there is trouble with Iran.