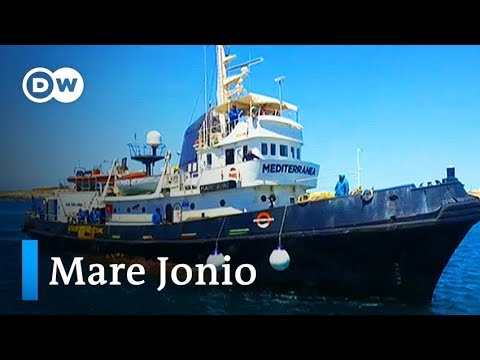 ( Waging Nonviolence ) – Over nearly five years, the small German charity Sea-Watch has saved more than 37,000 lives. But xenophobia and repression threaten its survival.

The Sea-Watch 3 is the only rescue ship currently operating in the Central Mediterranean Sea. (Sea-Watch)

At the height of the Syrian refugee crisis in 2015, there were 14 migrant rescue ships operated by international humanitarian organizations in the Central Mediterranean Sea. Today, following the ascendance of right-wing governments and draconian measures enacted by the European Union, only the Sea-Watch 3 and its small air reconnaissance plane still patrol the waters.

Owned and operated by Sea-Watch, a small German charity based in Berlin, the 180-foot ship has a crew of 22 skilled volunteers, including navigators, physicians, mechanics and cultural mediators. Since 2014, nearly 500 volunteers have worked with Sea-Watch to save more than 37,000 lives amidst the worst refugee crisis since World War II — a crisis that has forcibly displaced 68.5 million people worldwide.

In March, the EU downscaled its own rescue assets, known as Operation Sophia. This effectively turned over governmental search and rescue, or SAR, responsibilities in the Central Mediterranean to the Libyan Coast Guard, which is paid to return ship-wrecked migrants to Libya — a direct violation of the Geneva Refugee Convention, as it puts refugees and asylum seekers in an unsafe country. At the same time, all EU nations bordering the Mediterranean have adopted the policy of preventing rescue ships from landing and disembarking migrants.

While Sea-Watch 3 is currently the last nongovernmental rescue ship in the Central Mediterranean Sea, there are still some operating in the Eastern Mediterranean, near Greece. Once docked, they all face a protracted bureaucratic ordeal. Following port-of-entry registration and inspection, they are often detained on arbitrary charges such as a missing document. Meanwhile, the international crew members — who are primarily European in origin — face harassment and fines. Government hostility is particularly harsh in countries bordering the Mediterranean, despite there being a number of open-port and sanctuary cities like Palermo, Naples and Barcelona.

Aside from stalling and preventing rescue ships from docking, the EU also works with local authorities and militias in North and Sub-Saharan Africa to prevent migrants from ever making the dangerous trip to Europe.

Sea-Watch 3 has already experienced multiple stand-offs with European nations this year. For example, in January, Italy, France, Malta and Spain refused to offer the crew and its 47 guests safe harbor for almost two weeks. Finally, Italy allowed them to land and disembark in Catania — only to then detain the ship another three weeks on minor charges, preventing it from responding to urgent calls for SAR. In fact, while the Sea-Watch 3 was being detained, the United Nations High Commissioner for Refugees, or UNHCR, reported that 170 migrants perished in two shipwrecks off the coast of Libya and Morocco.

According to Jelka Kretzschmar, a Sea-Watch activist from Berlin, the rising tide of right-wing politics and xenophobia in Europe are to blame. “Negative public media campaigns and defamation have had a massive impact on our ability to operate. Tragically, every single day that the ship is blocked from rescuing, people perish at sea.”

Aside from stalling and preventing rescue ships from docking, the EU also works with local authorities and militias in North and Sub-Saharan Africa to prevent migrants from ever making the dangerous trip to Europe. In the case of Libya, a country invaded by NATO without UN Security Council backing in 2011, rival governments battle for national control and are quick to abandon refugee rights and safety in favor of bribes of foreign currency and weapons. This makes Libya the perfect breeding ground for smuggling, human trafficking and a wide variety of other human rights violations. Once returned to the failed state, migrants are most often detained in camps, raped, tortured, trafficked or sold into slavery.

As a result of EU efforts to seal the northern Mediterranean border, migrants are forced to choose different, unknown, and increasingly perilous paths towards the elusive goal of safety and security.

Kretzschmar expressed her frustration with the United Nations and the five permanent members of the Security Council for putting economic gain over human lives, and for failing to address the root causes of — as well as their complicity in — the global migration crisis. “A first step for the European Union is to stop investing in militias,” she said. “They should take responsibility and request the United Nations to send the blue helmets [U.N. peacekeepers] into Libya.” Seeing neocolonialism as a root cause mass migration to Europe, she noted, “You cannot exploit and destroy the resources and infrastructure of the southern hemisphere, repress its people and expect no reaction.”

Meanwhile, former Tunisian President Moncef Marzouki — who was elected after the Jan. 14 revolution in 2011 — puts the onus of the humanitarian catastrophe on the breakdown of sovereignty. At a recent event at Fordham University, he stated that, “Unlike Tunisia, which is a safe country with a centralized government, Libya has a power vacuum in which foreign powers are able to pay off rival governments and militias to stop migration and exploit oil and other resources. We need to increase the accountability of the international community.”

Marzouki named racism as a motivating factor in not only Europe’s xenophobia, but also Libya’s abuse and subjugation of black migrants. “The way Libyans are treating poor refugees is shameful,” he said. “We accept their deaths and this humanitarian disaster because they are African, from countries like Nigeria and Mali. It is a crime against humanity.” He went on to say that the EU — particularly Italy and France — share responsibility for engendering chaos and factionalism in Libya to control the border. He then asked, “Where is the international community to remedy this culture and structure of violence, and guarantee non-repetition?”

As a result of EU efforts to seal the northern Mediterranean border, migrants are forced to choose different, unknown, and increasingly perilous paths towards the elusive goal of safety and security. According to Kretzschmar, “There are no actual numbers of deaths in the desert or at sea, since a huge effort is invested to silence those who are watching and reporting.” Moonbird, Sea-Watch’s aerial reconnaissance asset, struggles to observe human rights violations in the Central Mediterranean, but is often grounded by governmental officials. “They seek to silence rescue missions, which often witness and report violations of international law and human rights by national and private vessels,” Kretzschmar said. At the same time, she argued, these countries bordering the Mediterranean fail to conduct SAR in conformity with Article 98 of the U.N. Convention on the Law of the Sea — an international treaty adopted and signed in 1982.

As the journey across the Mediterranean becomes more fraught with danger, much of the human flow from Africa and Asia has diverted to South and Central America, where many countries don’t require visas. According to Dr. Camilo Perez-Bustillo of the Hope Border Institute, one-third of those seeking asylum in the United States began their journey overseas. “Migrant flows at the U.S.-Mexico border, and specifically in the El Paso sector, are increasingly diverse and have recently included large numbers of migrants of African and Asian origin. This is reflected in an increasing number of African migrants seeking asylum here and being detained.”

So long as the United Nations and EU lack the political will to address their complicity in the root causes of mass displacement, civil society must carry the burden of solving the escalating humanitarian crisis.

Given this phenomenon, it is not surprising that the number of refugees reaching Europe’s shores is decreasing. According to Kretzschmar, attempts at migration across the Central Mediterranean are only one-tenth of what they were three years ago, but that hasn’t led to a drop in the death toll. According to the UNHCR and the International Organization for Migration, one in five people attempting to cross the Mediterranean will die, whereas three years ago it was one in 18. She emphasized that the actual death toll is much higher, as the official numbers account only for identified deaths, such as bodies washed up on shore.

Making matters worse, of course, is the fact that SAR ships are finding it nearly impossible to stay operative. Doctors Without Borders, SOS Mediterranee and Migrant Offshore Aid Station are among the humanitarian organizations that have been forced to shut down their vessels, particularly since populist parties in Italy took power in March 2018. From funding the expensive missions to confronting state-led smear campaigns to dealing with negative societal pressure to responding to increasing governmental constraints and the criminalization of staff — the challenges are simply too numerous. Even commercial boats and private fisherman are becoming increasingly afraid of responding due to all the complicating factors.

While Sea-Watch has managed to stay operative despite these challenges — thanks in large part to German and international donor support — new hurdles keep popping up. The latest obstacle comes from the Netherlands — the country where Sea-Watch 3 is registered and was undergoing planned maintenance and inspections in March. Just before leaving to return to SAR operations in the Mediterranean, the Dutch government issued a new policy citing concerns for the onboard safety of rescued individuals. It has effectively thwarted Sea-Watch 3’s movement. According to Kretzschmar it is “the absurdity, perversion and institutionalized discrimination of a policy that would rather leave people to drown than rescue them.”

Now, as it approaches five years of operation, Sea-Watch continues its fight to be fully operational. So long as the United Nations and EU lack the political will to address their complicity in the root causes of mass displacement, civil society must carry the burden of solving the escalating humanitarian crisis. Sea-Watch remains vehement in its call for #SafePassage and has no intention to give up its fight to ensure no one dies at Europe’s deadly southern border.

This story was produced by Fellowship of Reconciliation

Susan H Smith is director of operations at the Fellowship of Reconciliation, community liaison for the Muslim Peace Fellowship, and a member of the intentional multi-faith Community of Living Traditions at Stony Point Center, NY. She is involved in migrant justice and anti-Islamophobia work at local, national and international levels.