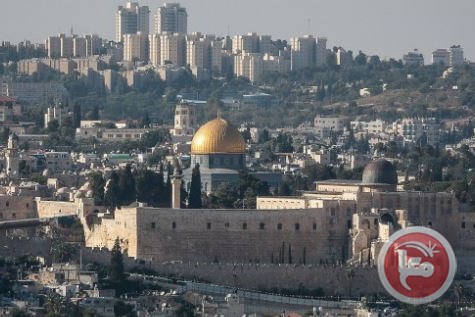 BETHLEHEM (Ma’an) — The main points of the United States’ anticipated Middle East peace plan, the so-called “Deal of the Century,” were revealed by a Hebrew-language news outlet, on Tuesday.

Israel Hayom news outlet published the main points of the “Deal of the Century” from a leaked document, which was circulated by the Israeli Foreign Ministry.

The following are the main points of the agreement proposed by the United States administration:

The settlement blocs as they are today will remain in the hands of Israel and will be joined by the few settlements. The areas of the blocs will grow according to the area of the isolated settlements that will be added to them.

The Holy Places will remain as they are today held.

Egypt will lease new land to Palestine for the purpose of establishing an airport for the establishment of factories and commerce and for agriculture, other than housing. The size of the territories and the price will be determined between the parties through the mediation of the supporting countries (an explanation for the countries that support the continuation of the road).

The countries that will financially support the implementation of this agreement are: the United States, the European Union and the oil-producing Gulf states.

The supporting countries will provide a budget of $ 30 billion over five years for national projects for the new Palestine. (The cost of evacuating the isolated settlements and their location in the settlement blocs will apply to Israel).

6. The division between the supporting countries

C. The oil producing Gulf states – 70% – will be divided according to their oil production.

D. Most of the burden on oil producing countries is because they will be the main beneficiaries of this agreement.

The new Palestine would no longer have to form an army. The only weapon would be light weapons held by the police.

The cost of this payment shall be in negotiations between the parties, mediated by the supporting countries.

8. Timelines and stages of execution

Upon signing the agreement:

A. Hamas will deposit all its weapons, including the personal weapons of the Egyptians.

B. Hamas members, including the leaders, will continue to receive salaries from the supporting countries until the establishment of the government.

C. All the borders of the Strip will be open to the passage of goods and workers to Israel and Egypt as they are today with Judea and Samaria and by sea.

D. Within a year, democratic elections will be held and a government will be elected to the new Palestine. Every Palestinian citizen will be able to stand for election.

E. Prisoners – One year after the elections and the establishment of the government, the prisoners will be released gradually for three years.

F. Within five years, a seaport and airport will be established in the new Palestine and by then the airport in Israel and the seaports in Israel will be used.

G. The borders between the new Palestine and Israel will be open to the passage of citizens and goods as is the case with friendly countries.

H. An autostrada will bridge a bridge about 30 meters above the surface of the earth, between Gaza and Judea and Samaria, the highway will establish a Chinese company, the financing of the highway – bridge will come from:

A. The Jordan Valley will remain in the hands of Israel as it is today.

B. Route 90 will turn into a four-lane toll road.

third. Israel will issue a tender for paving the road.

A. If Hamas and Shas object to this agreement, the US will cancel all their financial support to the Palestinians and ensure that no country in the world transfers money to them.

C. If Israel opposes this agreement, economic support for Israel will cease.